At the Church of Michael the Archangel I admired the view of the island of Capri,

he took the road that ran along the beach, intending bravely to reach the village of Testaccio, or even Barano. 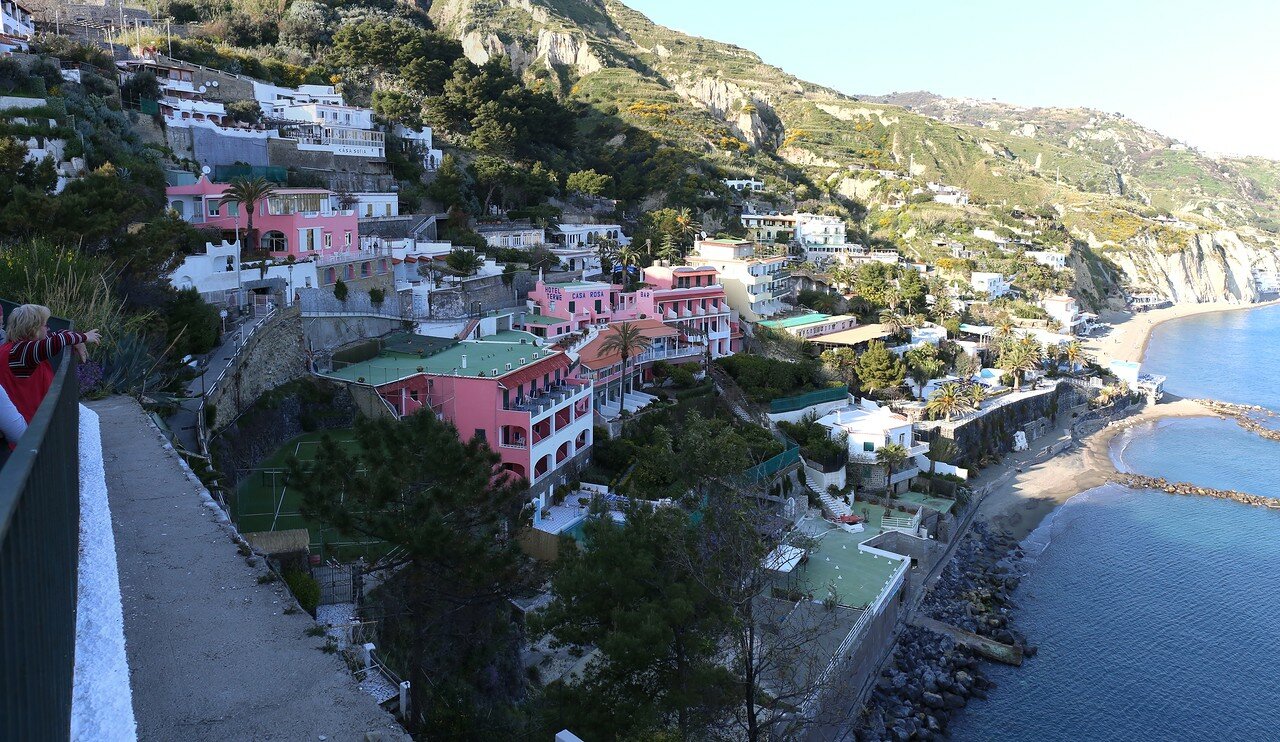 At first, a good asphalt road went downhill, along which hotels-aquariums descended in terraces to the sea. 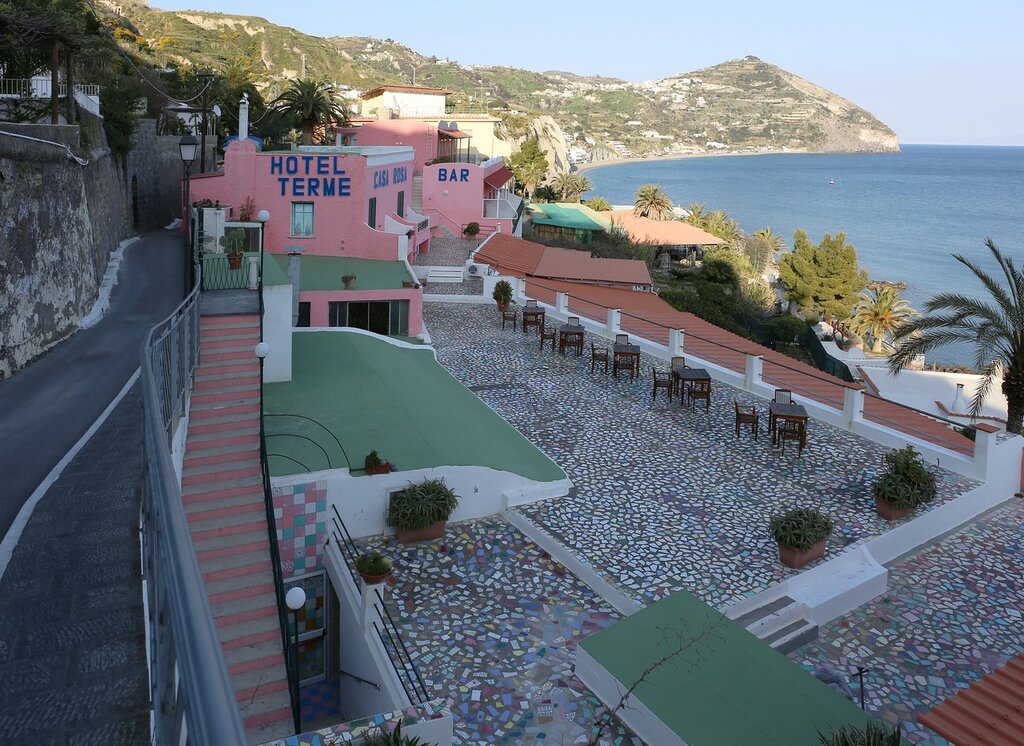 The famous Aphrodite and Apollo thermal Park (on the map), I was very close to Sant'angelo, and I walked slowly to it. for 10 days. On the path, you can meet small electric cars - the main thing a means of transport in the resort area of Sant'angelo. 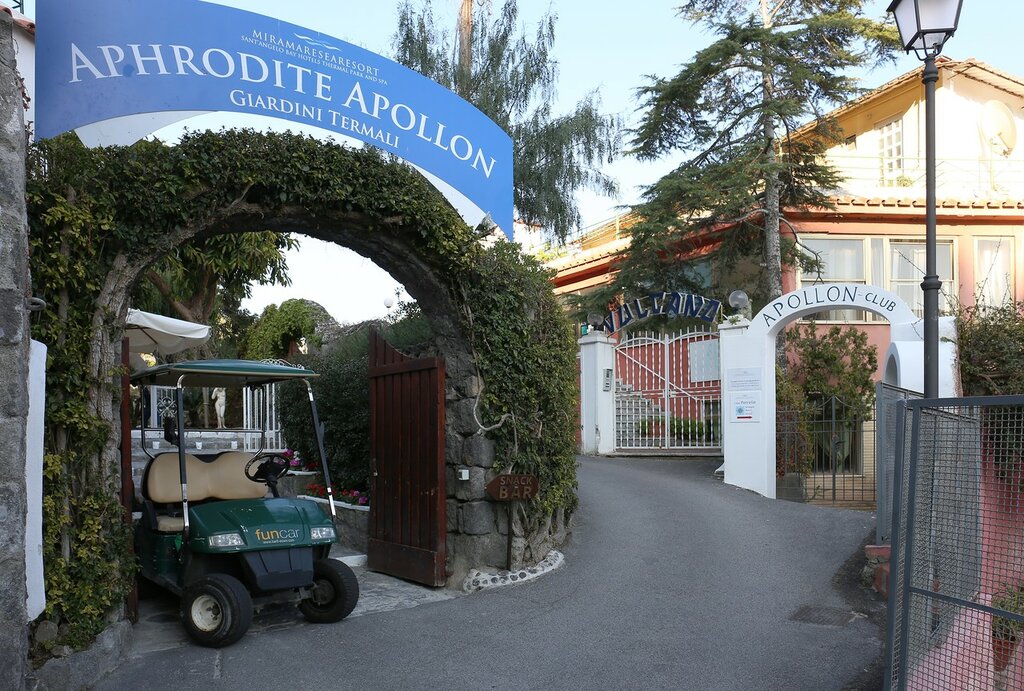 This is the smallest thermal Park on the island, its area is about 7 thousand meters. On the territory of the Park there are 12 swimming pools with water temperatures from 20 to 42 degrees Celsius, mud baths and other SPA infrastructure. 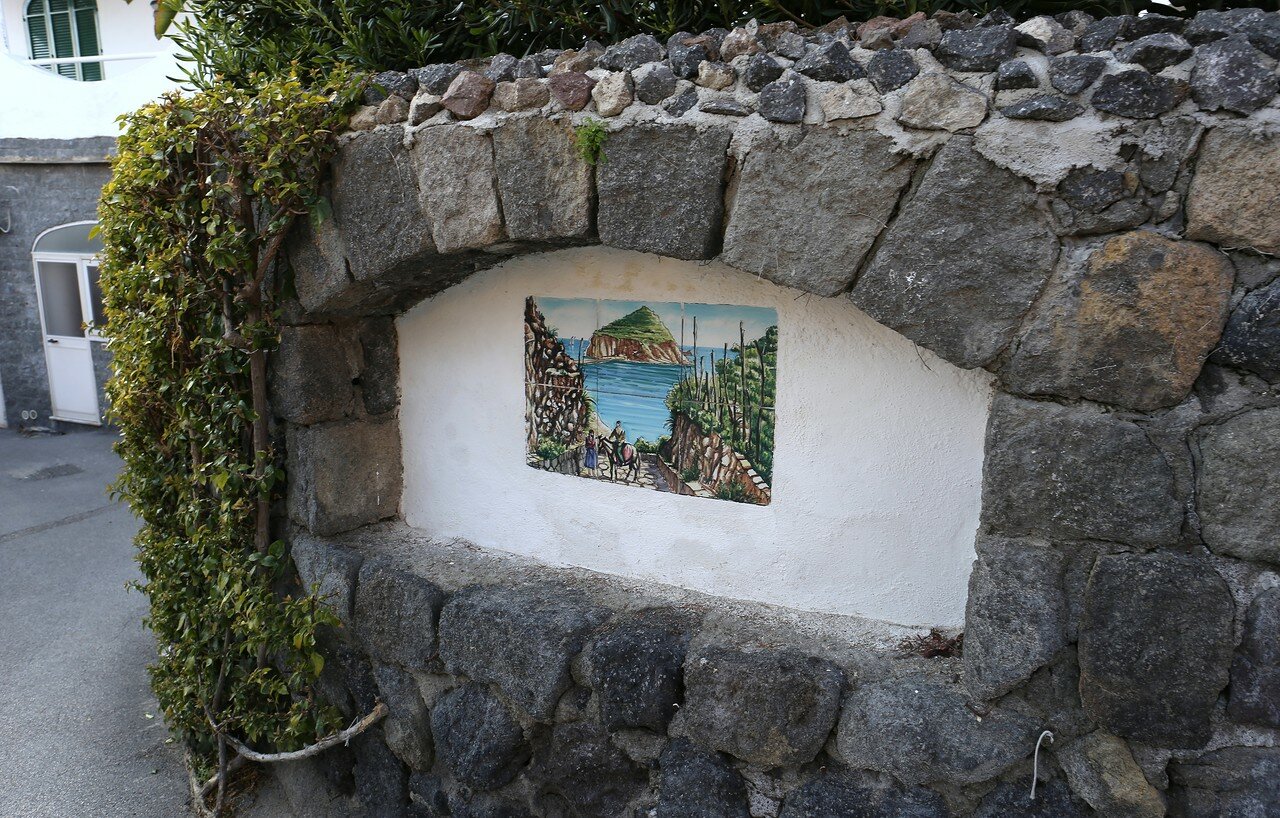 Along the coast of Maronti runs a powerful a geological fault, where magma comes close enough to surface heating of deep underground water. About healing properties hot springs were known even by the ancient Greeks, here I improved my health Roman nobility, but the island of Ischia became a mass resort in the mid-19th century centuries, thanks to the efforts of king Ferdinand II of Naples, who has invested a lot of money in the development of the island's infrastructure. 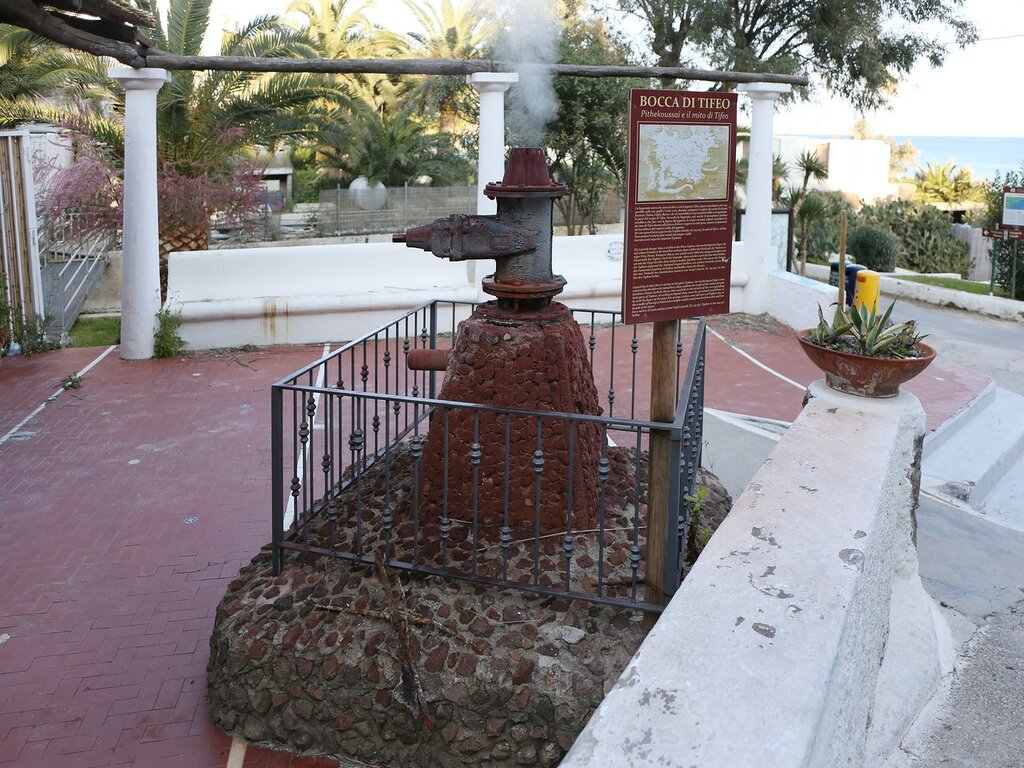 Fumarola-high-pressure outlet a vapor-gas mixture consisting of volcanic gases and sulphate waters. The fumaroles on which the Aphrodite-Apollo thermal Park is built bear the following names the name "Mouth of Typhon" (Bocca di Tifo) - a giant thrown into the sea Zeus. According to legend, it is on his powerful shoulders that the island of Ischia is held, fumaroles are the breath of Typhon, earthquakes are the movements of his body. About this one the legend of Sant'angelo was mentioned by Virgil in the ninth book of the Aeneid: "Where at the behest of his Father crushed Tifa Inarime". (715, Inarime - ancient the name of Ischia). 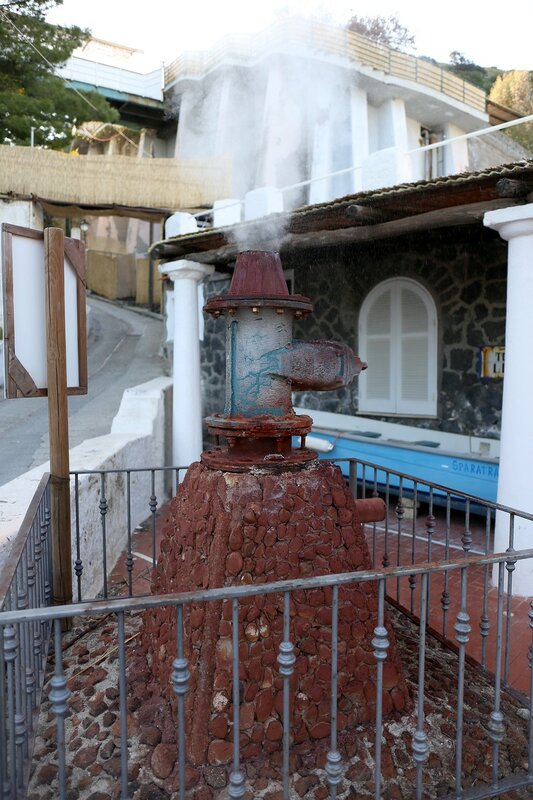 From the Park to the sea descends a picturesque alley. 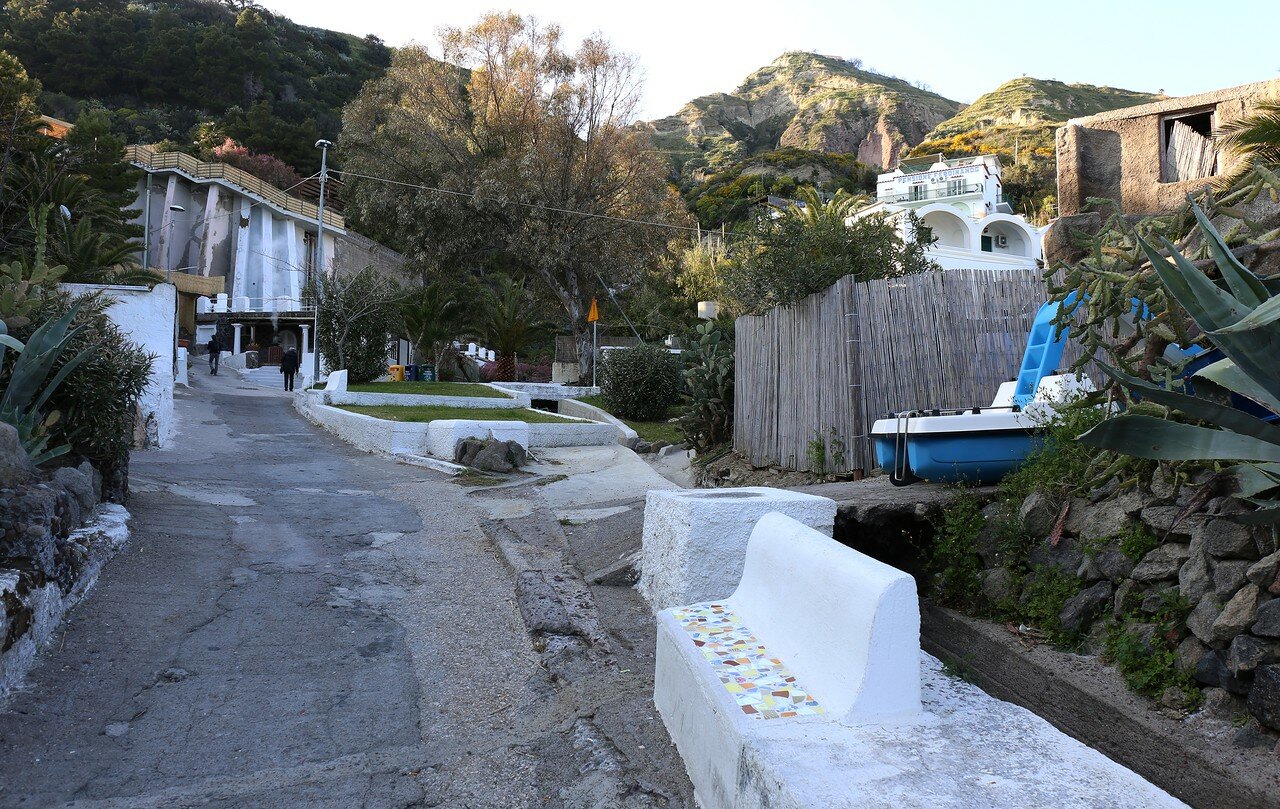