Around Porto di Ischia. Buchner Park and the Damb

After passing the ferry docks, I headed for the isthmus that separates the Harbor from the sea. To get there, you need to cross the old channel that once connected the volcanic lake with the sea. Before Ferdinand II built a real port on the site of the lake, fishing boats passed into it through a narrow channel dug in the sandbar. The canal was built in 1670 and was named La Foce ("mouth", "throat", on the mapAfter the construction of the port in the middle of the 19th century, the canal lost its importance and gradually became clogged with sea sediments. The old arched bridge that crossed the canal has been preserved. Across the bridge, you can see the dome of the Ferdinand II Chinese pavilion ("pagoda" on the map). I don't know where the architect got his inspiration from, but the building looks more like a Central Asian mosque. 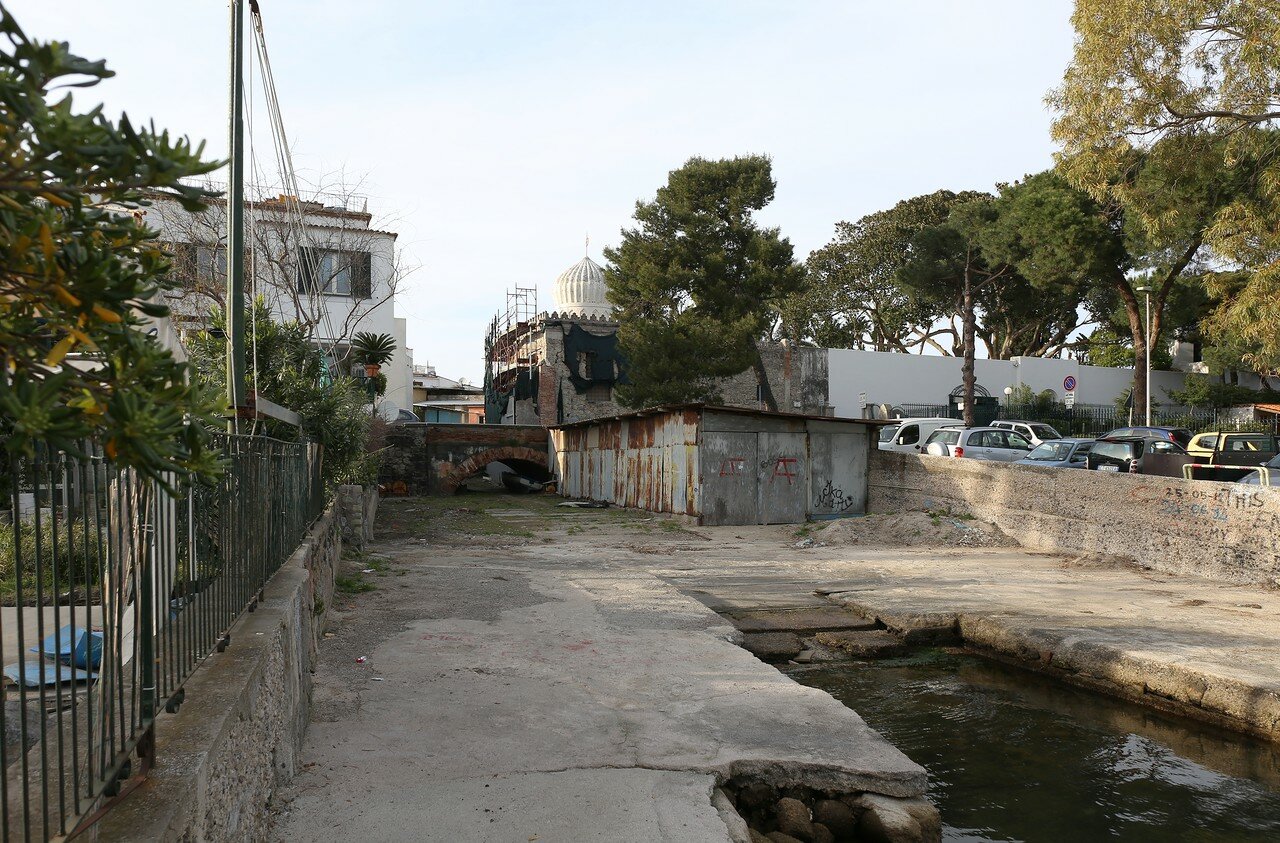 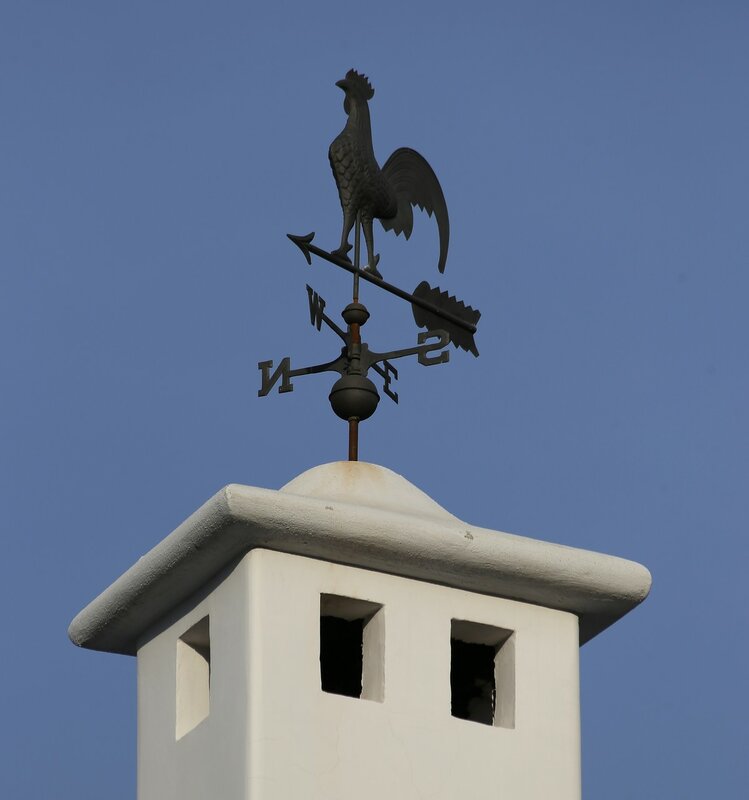 Beyond the old riverbed begins a Park named after Professor Buchner (on the map). 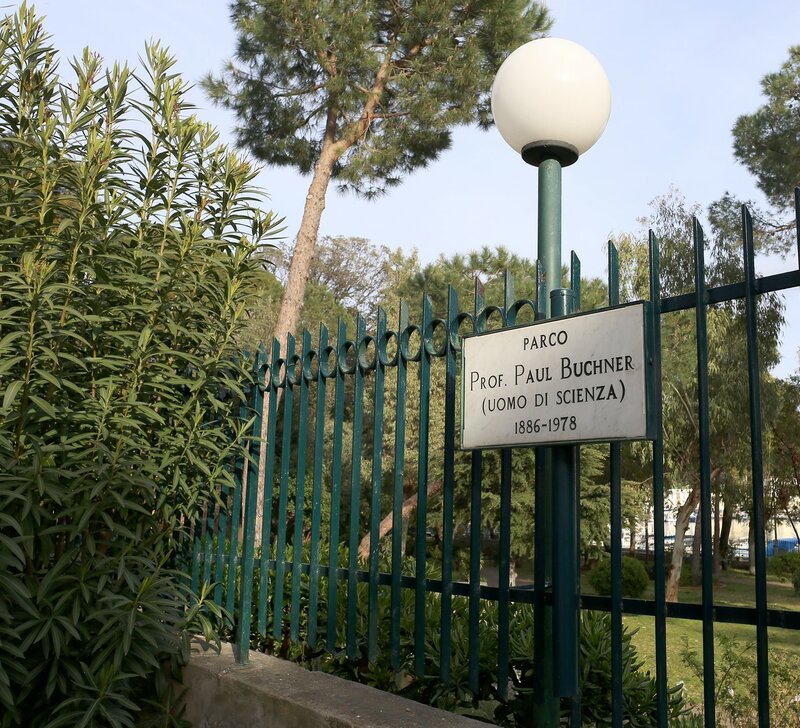 A German biologist settled on the island in 1944, where he studied marine life until his death. 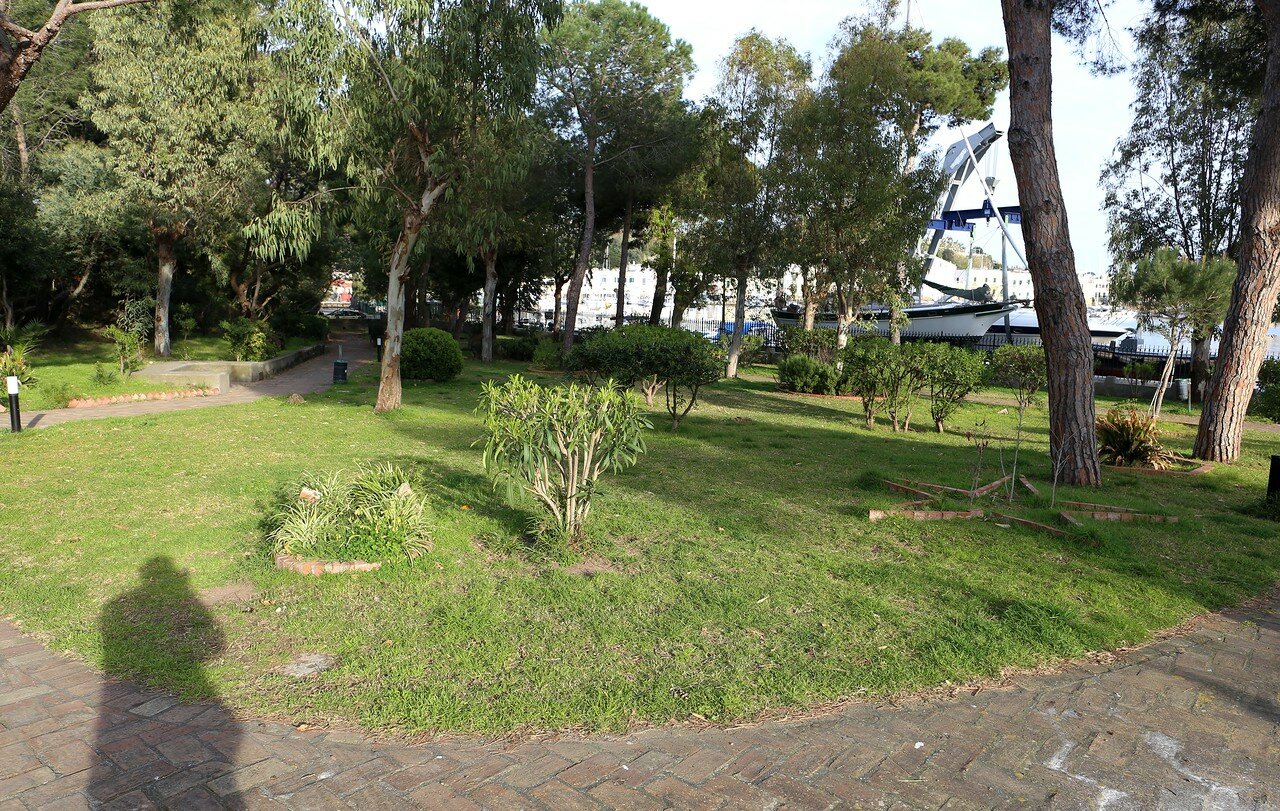 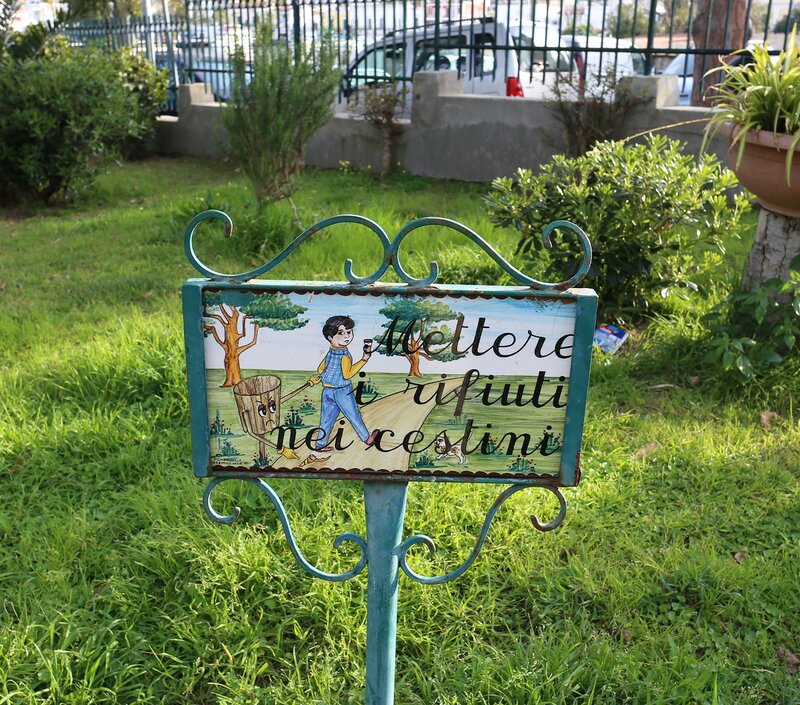 The Park ends with a platform that rises above the entrance to the Harbor. 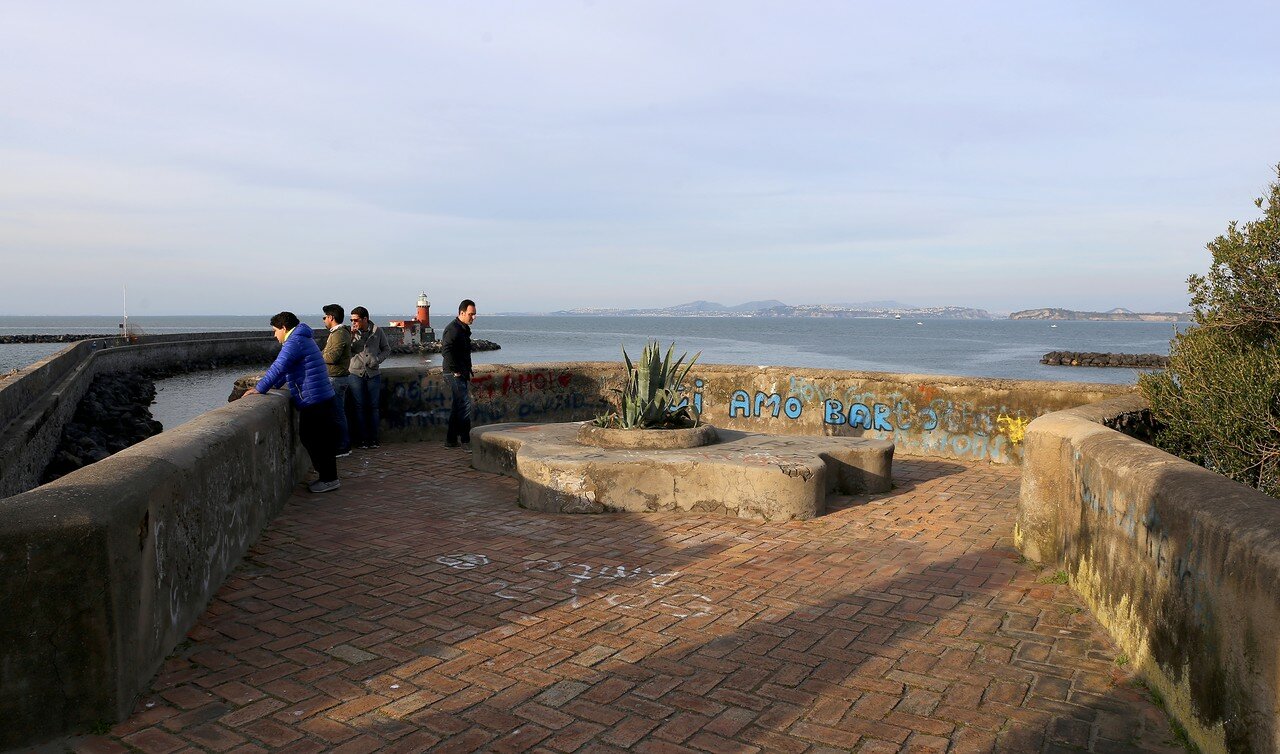 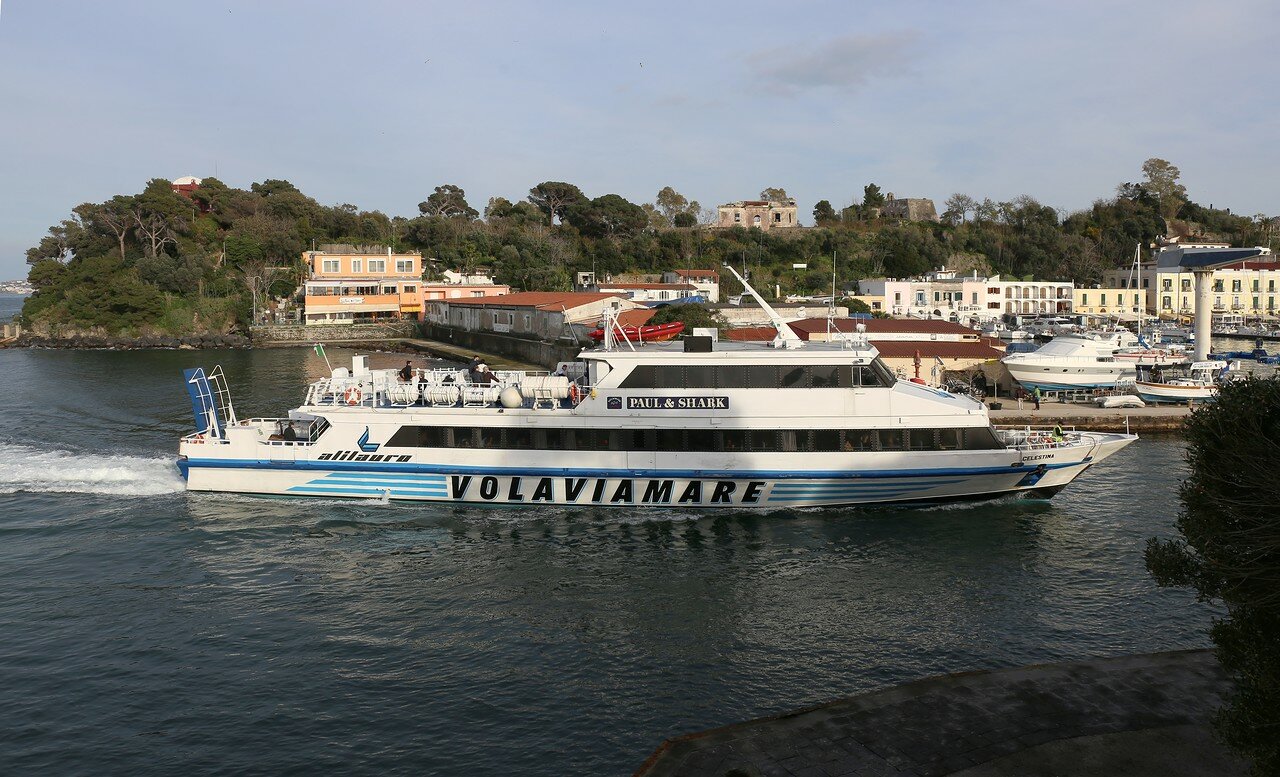 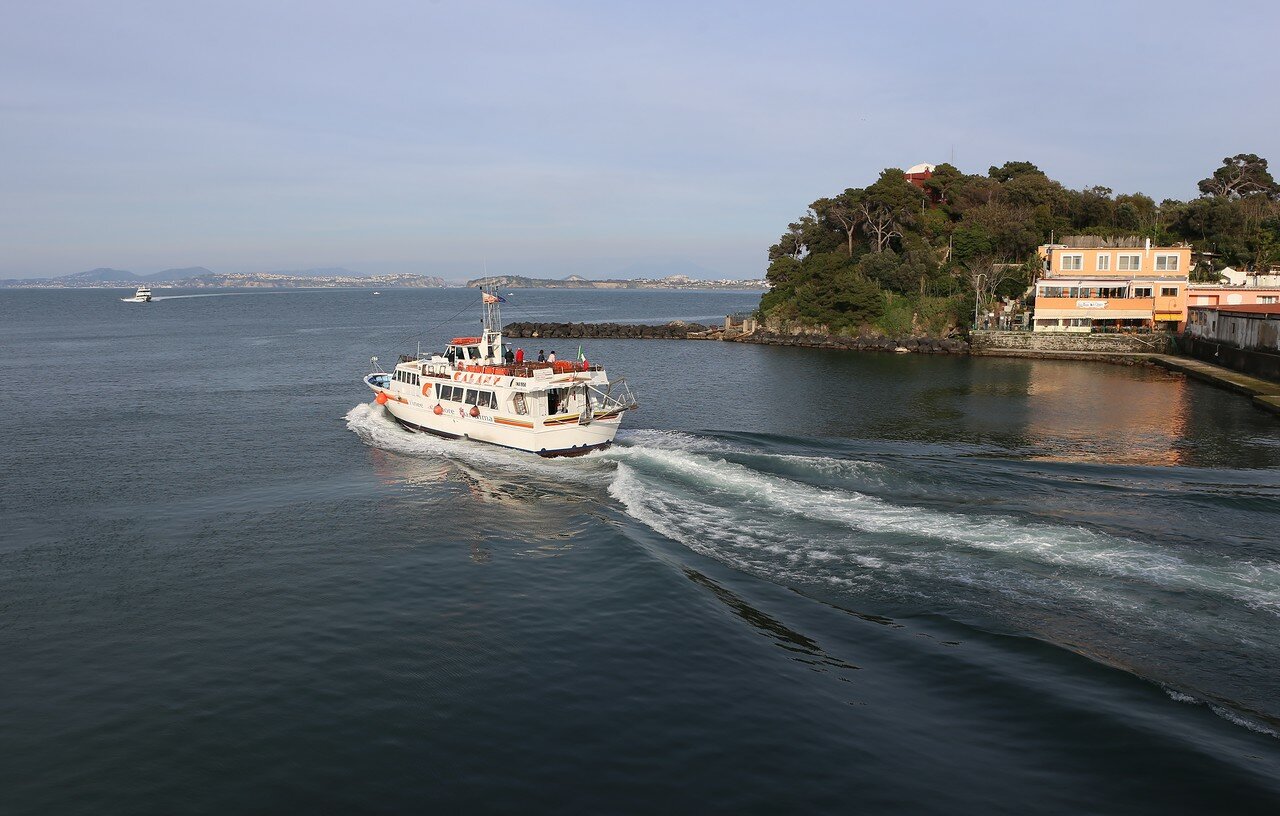 From the platform, you can view almost the entire island of Procida, behind which you can see the cone of Vesuvius. On the right is the island of vivara, formed from an ancient volcanic crater.

Today the visibility is good, so you can distinguish individual houses on Procida.

The distance from Ischia to Procida is about 6 km, to the crater of Vesuvius-exactly 40 kilometers. On the highest hill of Procida, you can see the ancient fortress of Terra Murata. The island is inhabited, as in the old days, by fishermen and is completely undeservedly ignored by guidebooks. With the tourist infrastructure there is not much, but it is worth going there at least for a day. I wish I'd had the time. However, it was not enough for Ischia either... 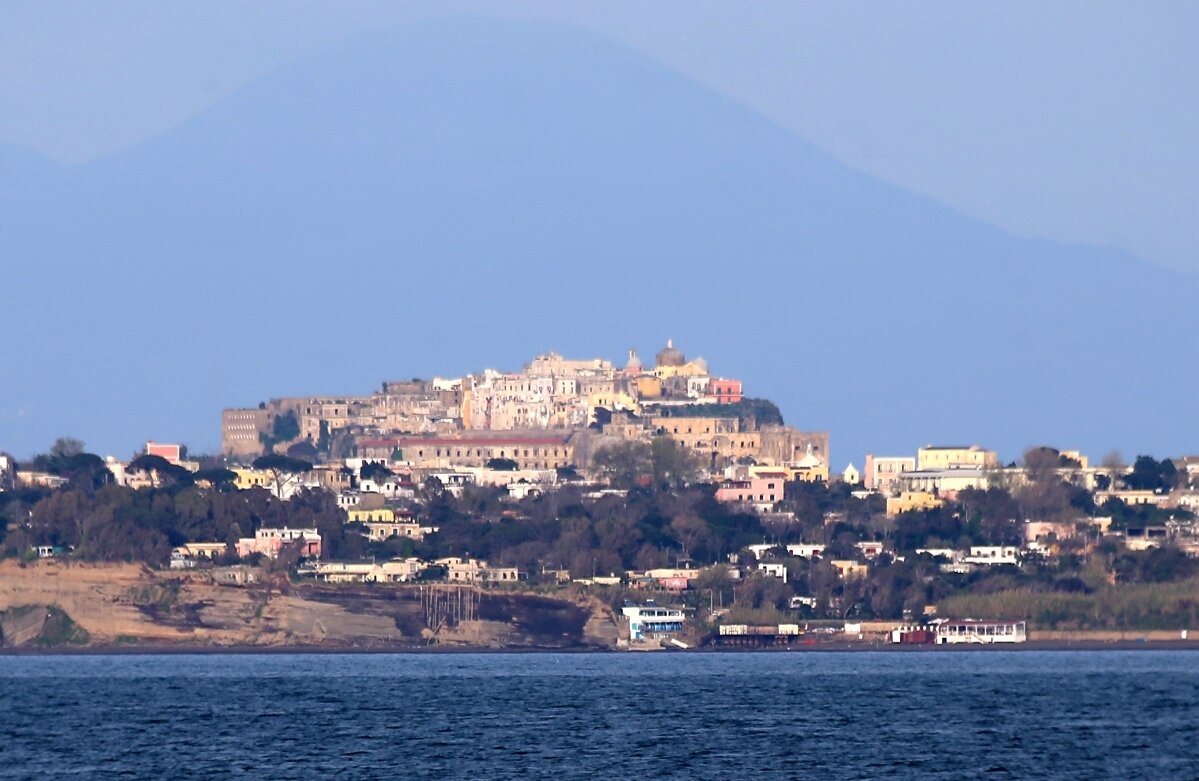 Procida is served by the Naples-Ischia ferries, and there are direct high-speed boat services from Naples and Ischia, as well as access to the island from Pozzuoli. 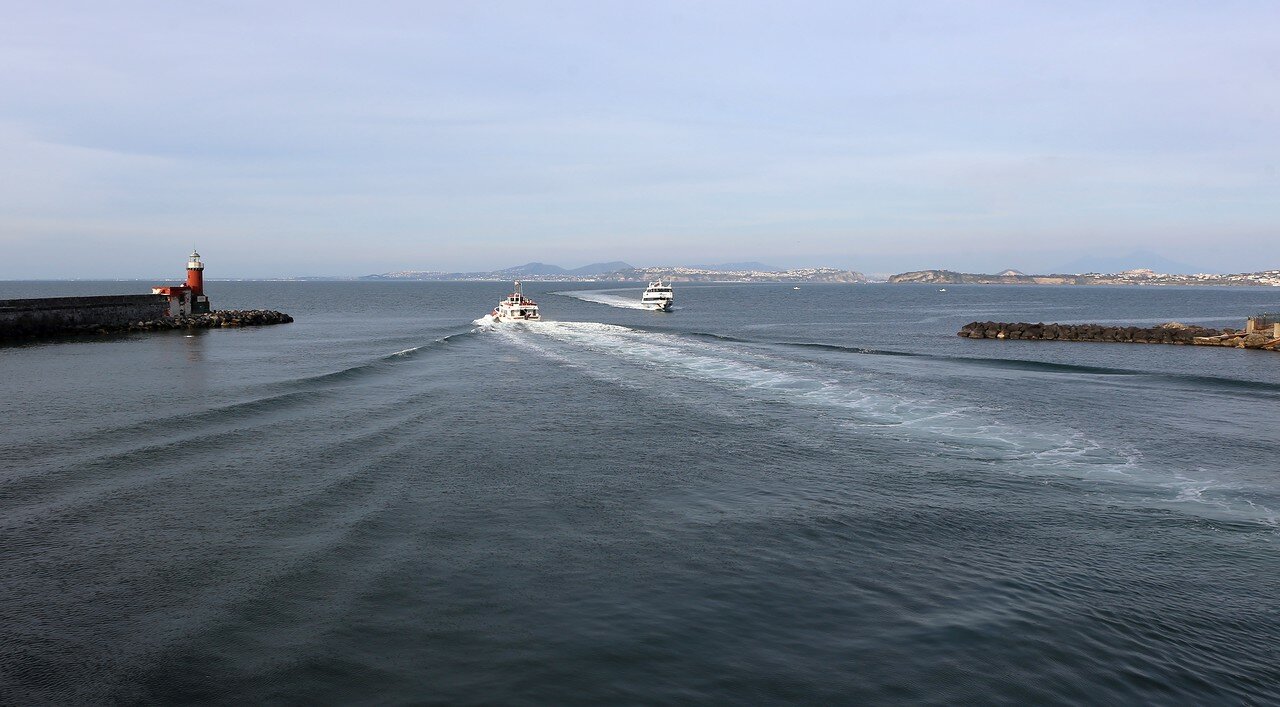 A fisherman returns from an evening fishing trip. Many residents of the island, as hundreds of years ago, continue to engage in marine fishing.

The entrance to the Harbor from the West is protected from the waves and wind by a jetty a quarter of a kilometer long. 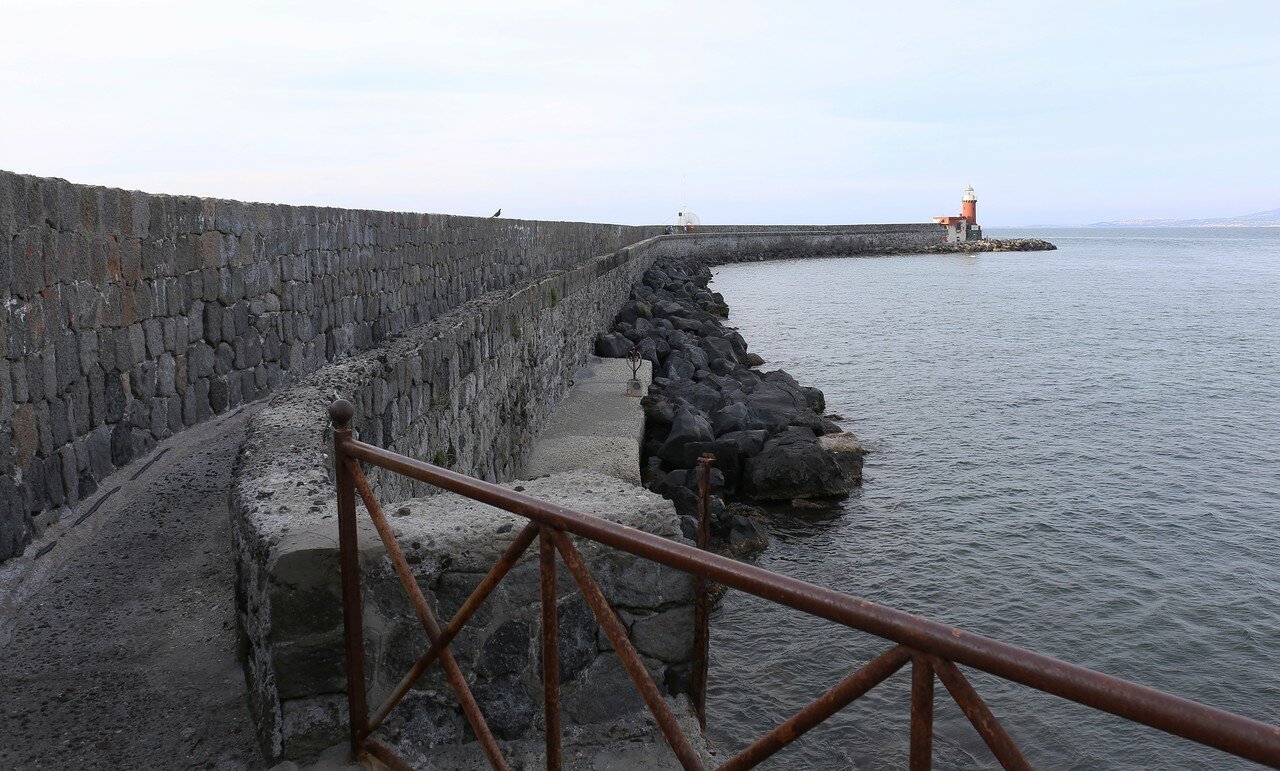 Along the pier, you can walk under the shelter of a high stone wall, without fear of being blown into the sea. 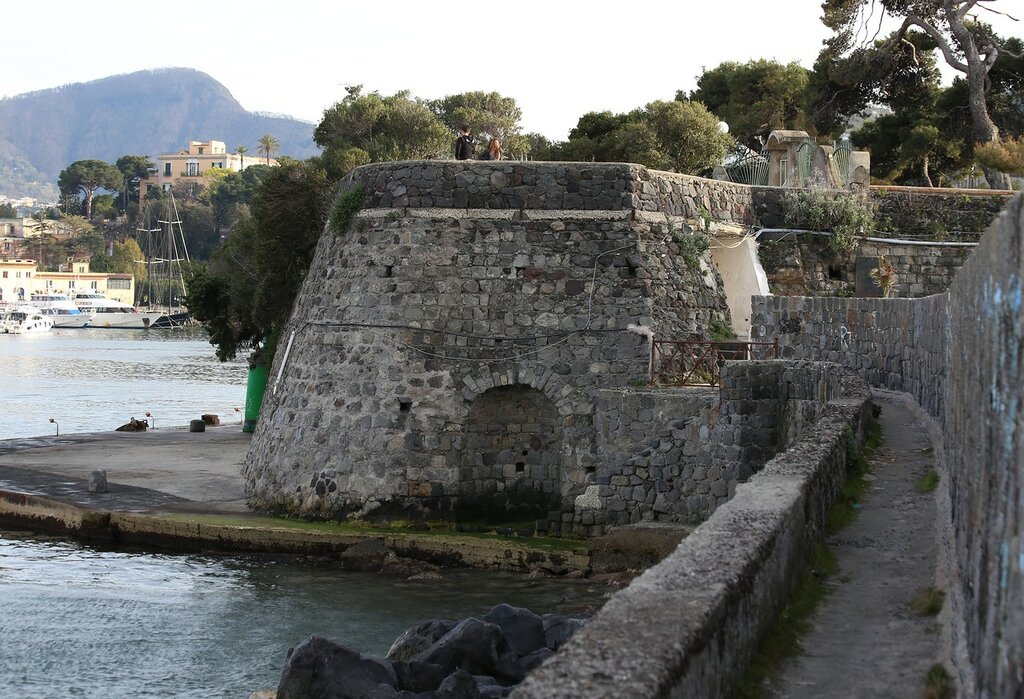 The pier and lighthouse (Faro del porto di ischia) were built a few years after the official opening of the port in 1854. 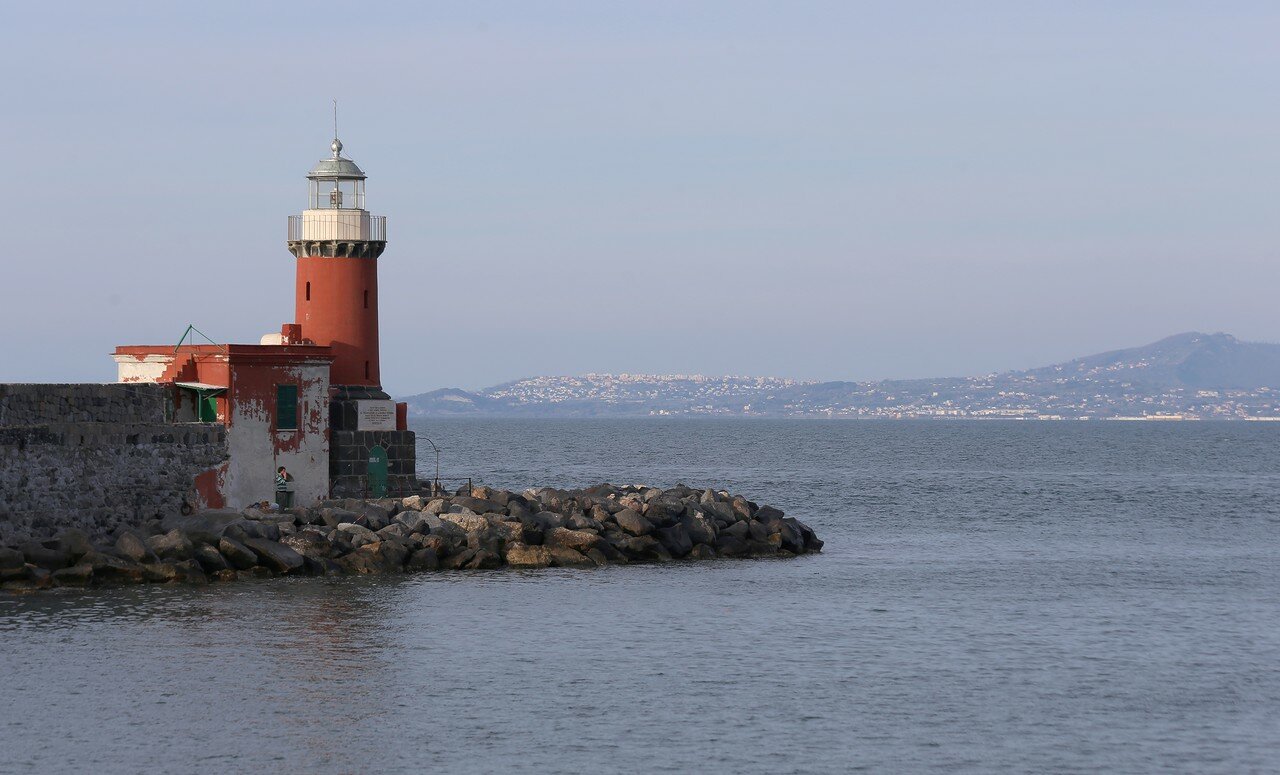 After walking along the pier, we will look at the entrance to Porto di Ischia from the sea. One can only wonder how large ferries pass through such a narrow gap. 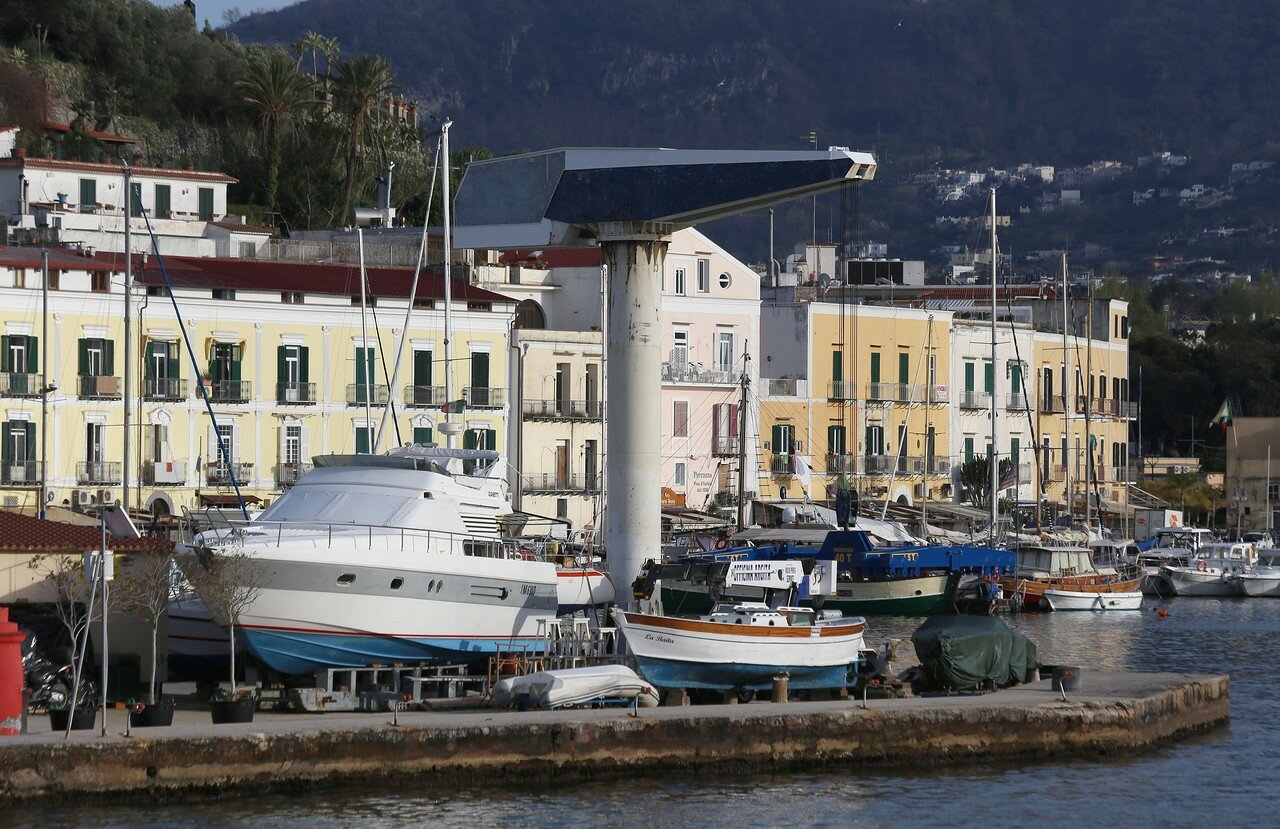 On the other side of the pier there is a small beach. 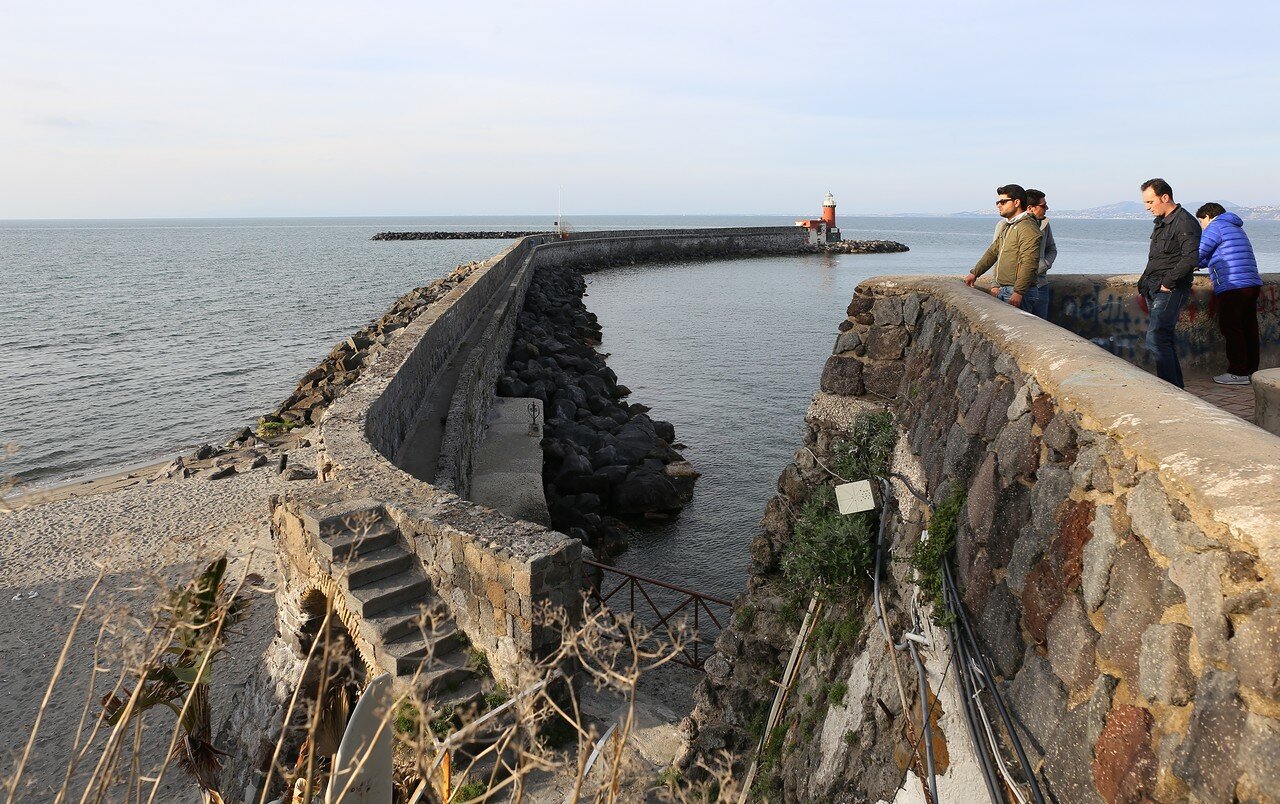 This beach is popular with surfers - it opens out to the open sea, there is a good wave. 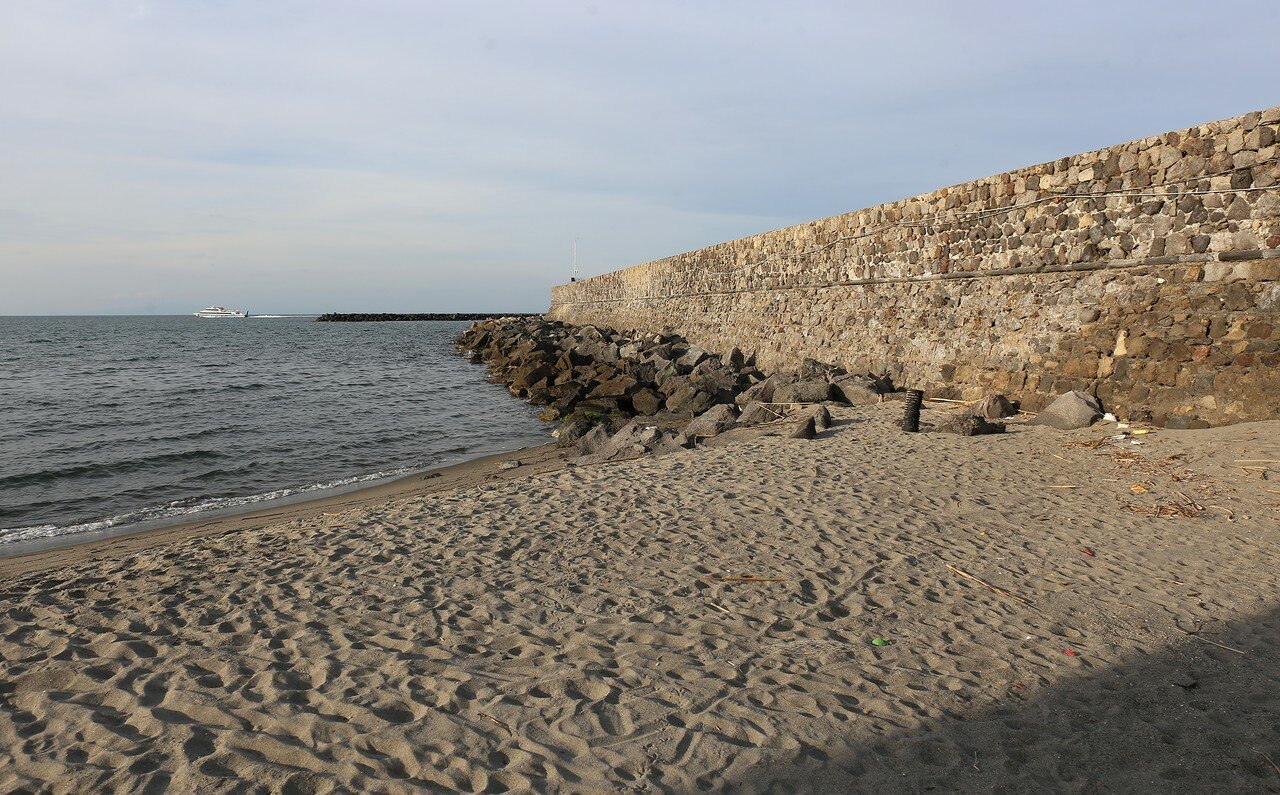 It is clear from the debris deposits that the beach is often completely flooded with water. 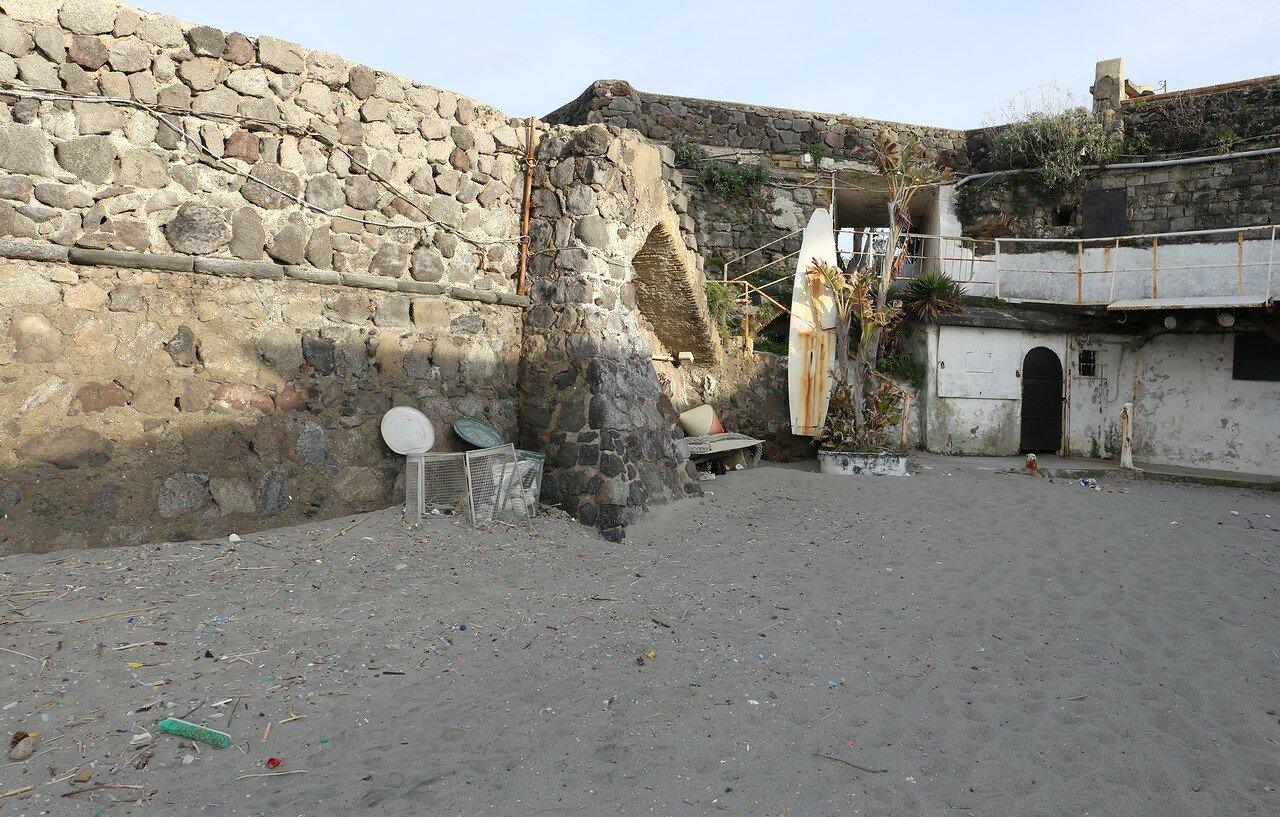 There is another lighthouse at the entrance to the Harbor, and another red one on the other side of the channel. 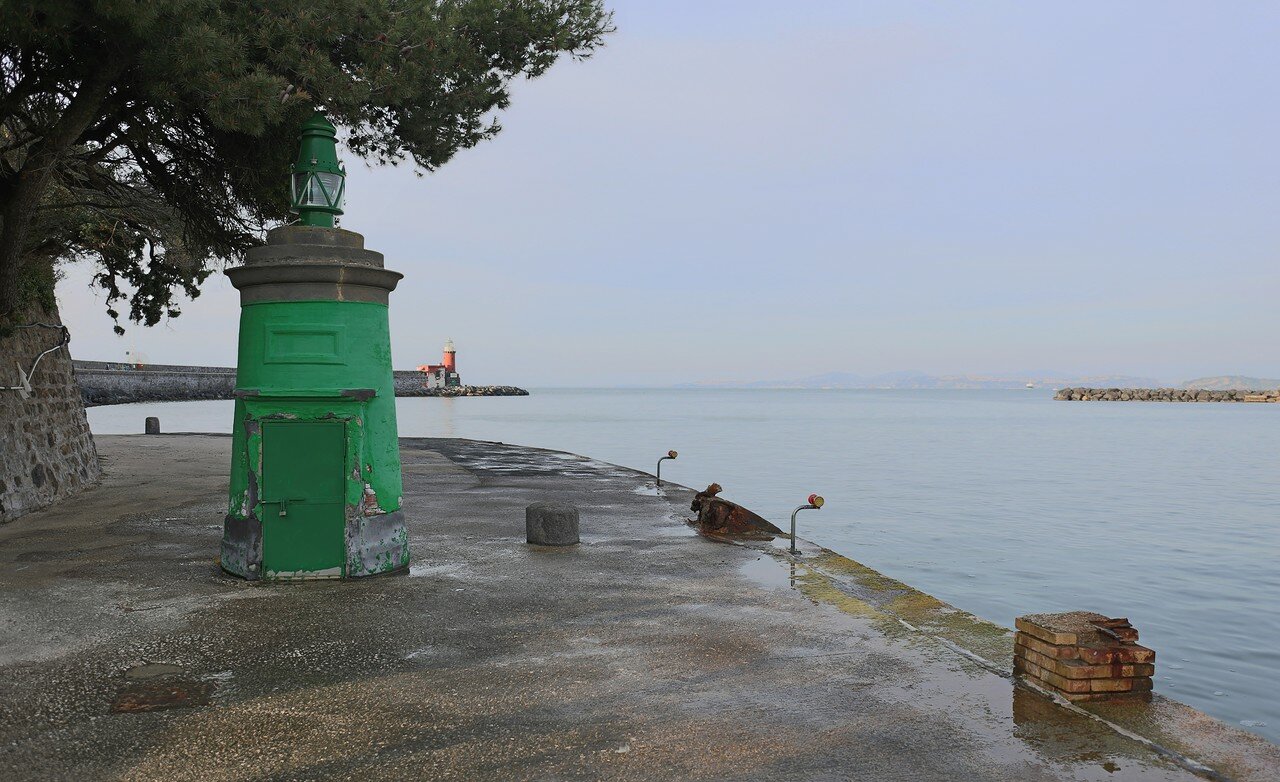 Here, boats and boats are launched from trailers. Watercraft can be found on the island everywhere, even at the height of half a kilometer. Bringing a boat in on a trailer and paying for a crane is cheaper than paying for a permanent berth at the Harbor docks. 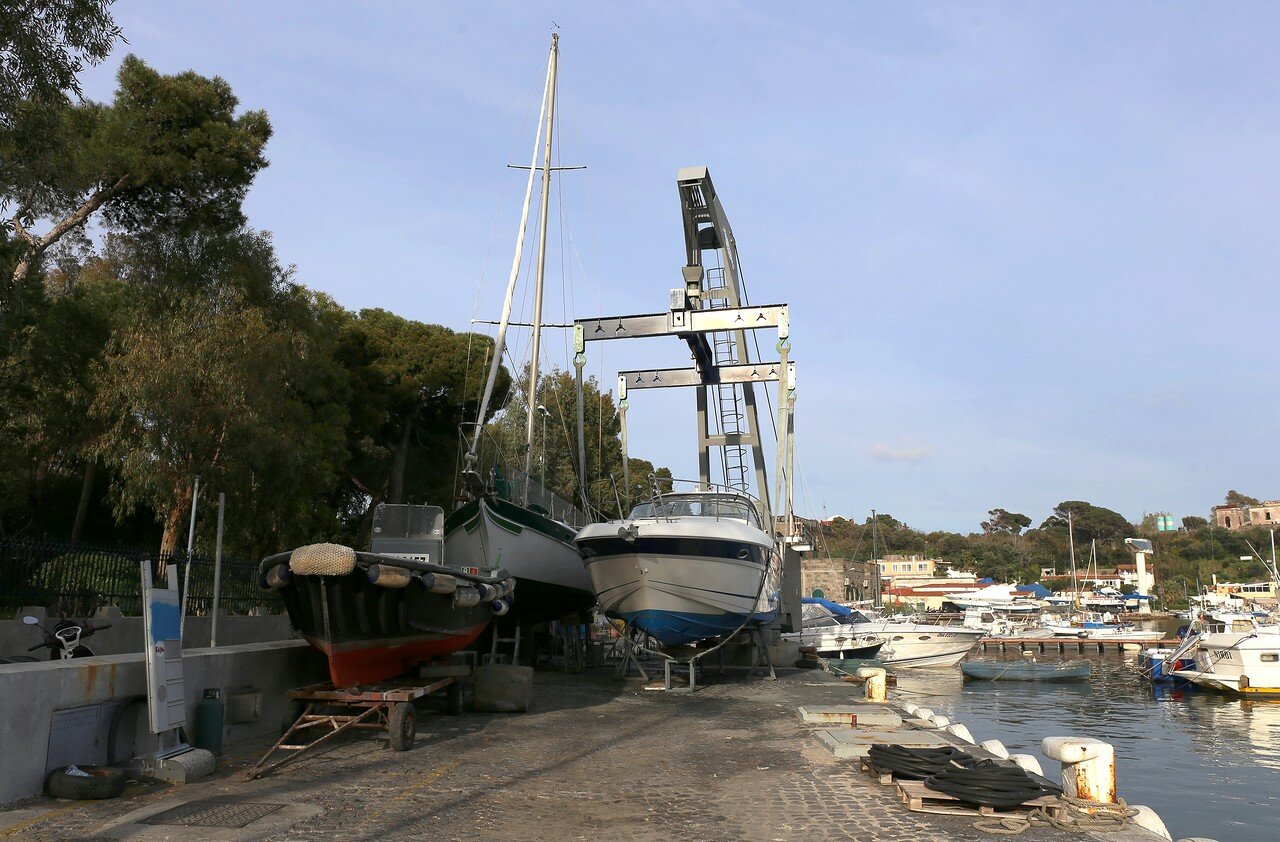 On the left Bank of the entrance channel, you can see another building from the era of Ferdinand II. The building with the white dome on the right is on the right Bank. The channel itself is not visible, it is so narrow and gives the impression that it is one Bank. 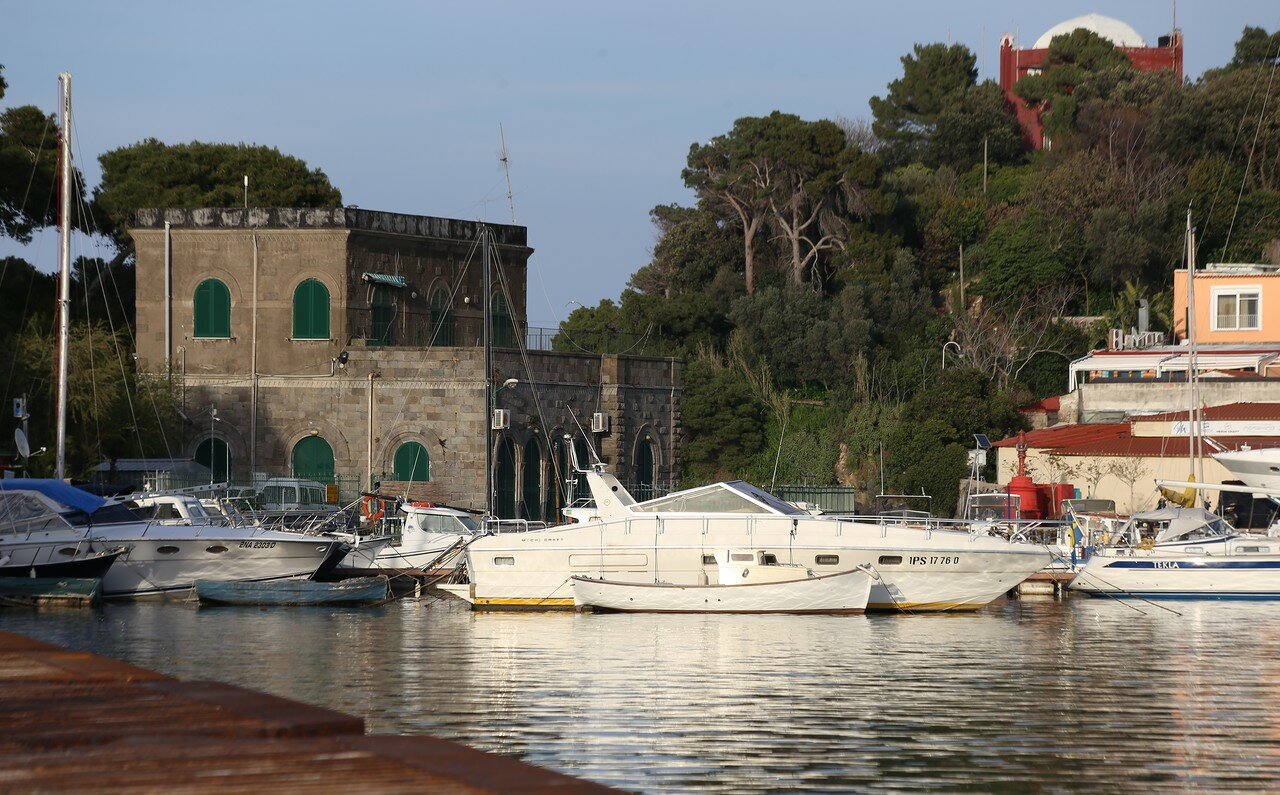