The Rock of Sant'Angelo

The main attraction of the village of Sant'Angelo is visible as soon as you get off the bus, there is a viewing platform, which offers the best view of the rock. 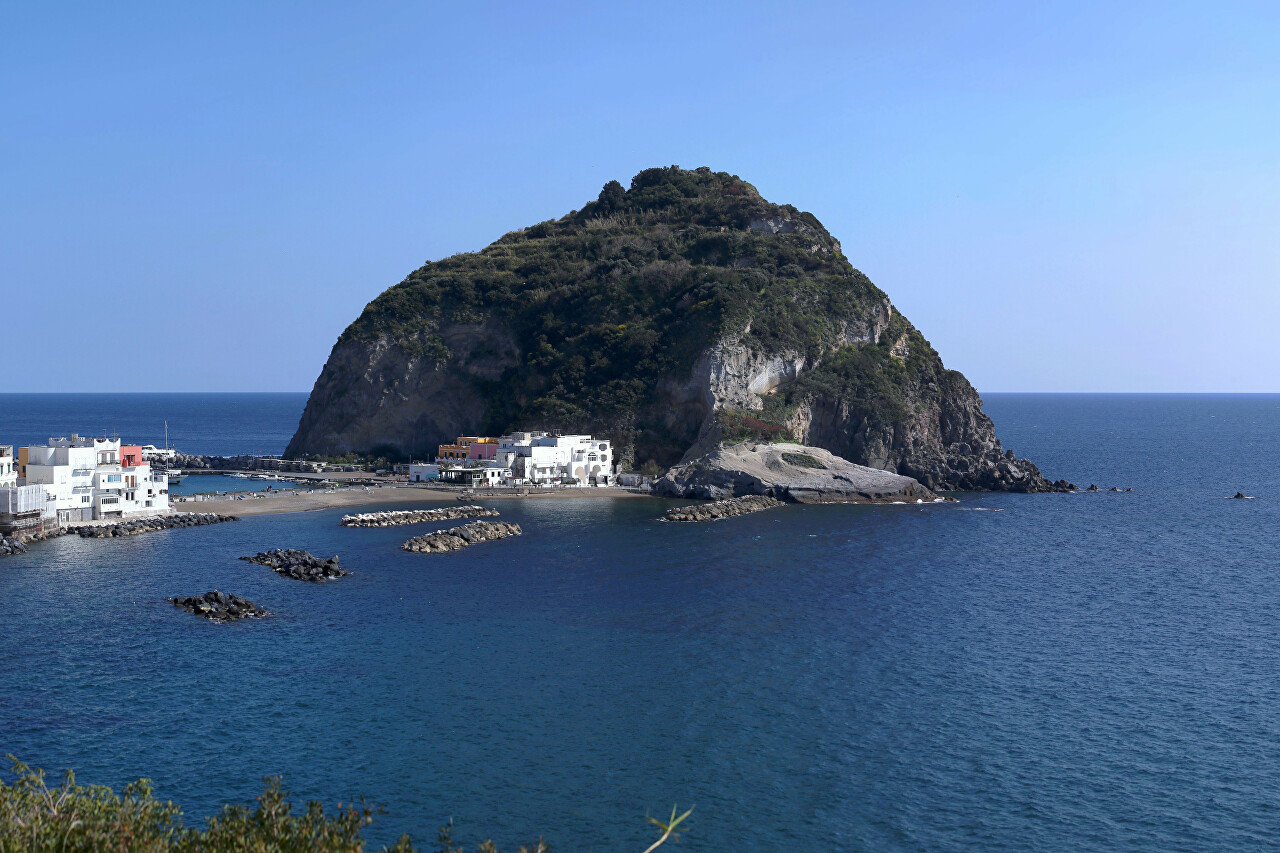 The rock is connected to the island by a bridge with beaches and a promenade, at the foot of the rock is the hotel Conte - S. Angelo Bay 3*, a couple of restaurants, as well as several boutiques with exclusive clothing and souvenir shops. 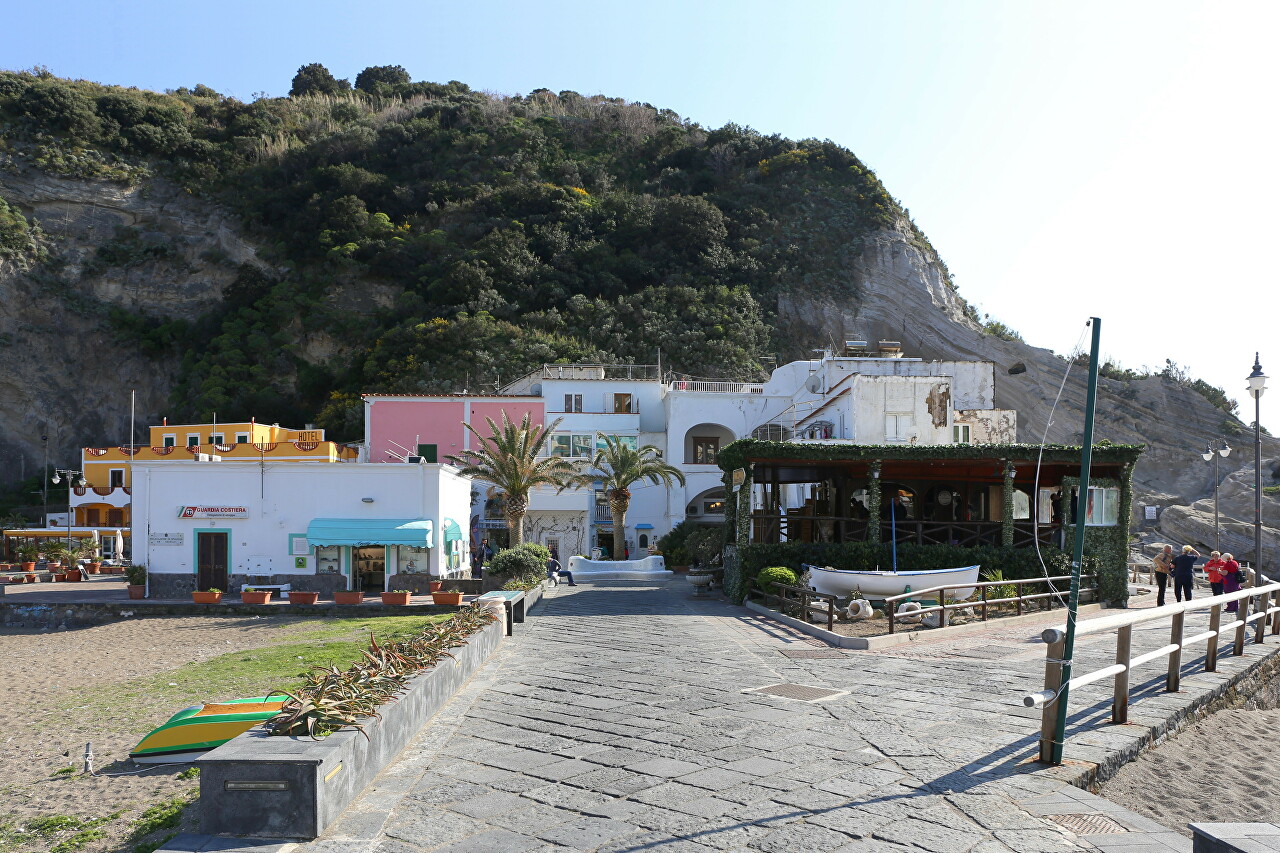 The island of Ischia appeared about 55 thousand years ago as a result of volcanic activity. The territory of the island is layers of lava erupting from dozens of craters. The western part of the island, where there was the greatest activity, stands on a powerful geological fault, the emissions from which formed this rock. The rock where the Aragonese castle stands has the same origin. You can admire the frozen lava flows that look like a layer cake. 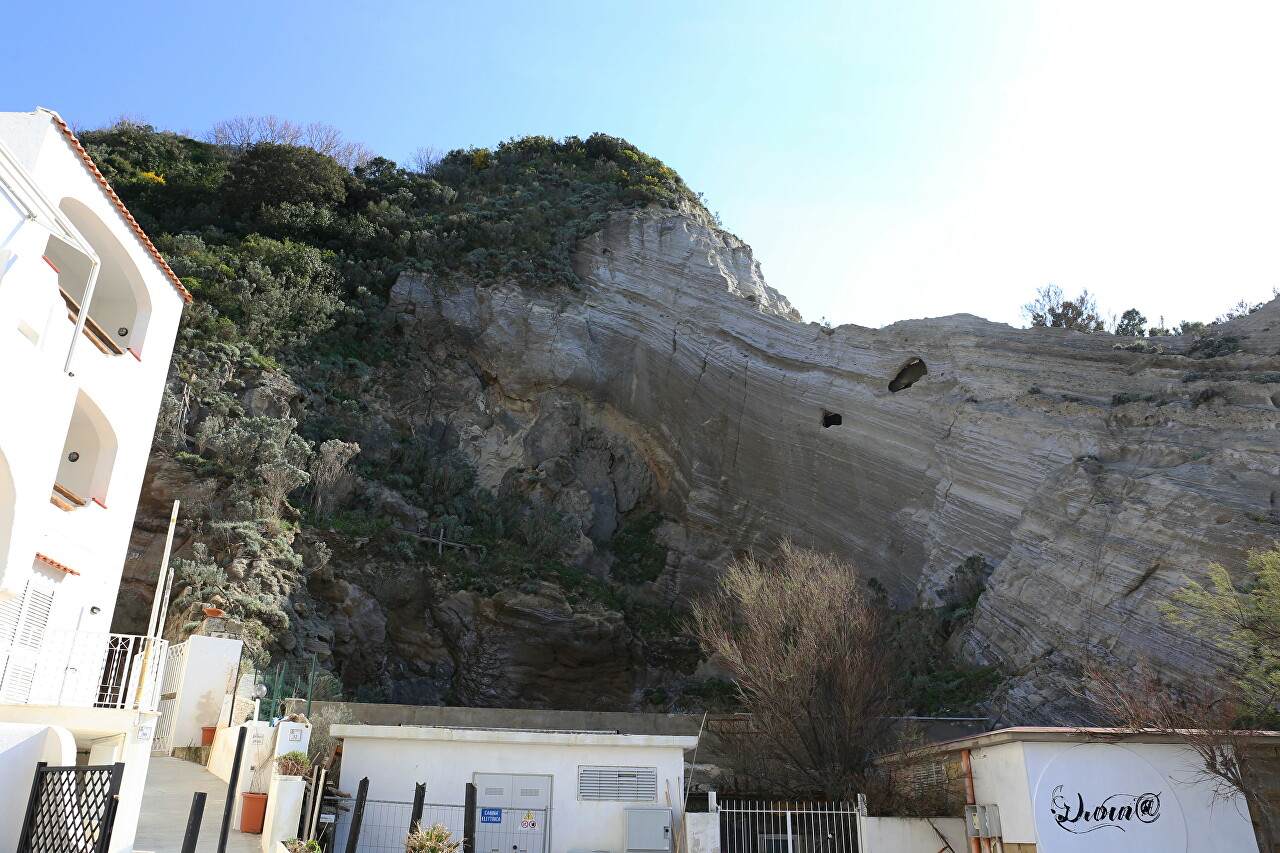 Over time, between the island and the rock, the waves washed a sandy bridge, and on the sides of it formed two small bays. The rock protects them from the wind and waves, so here is the fishing village. 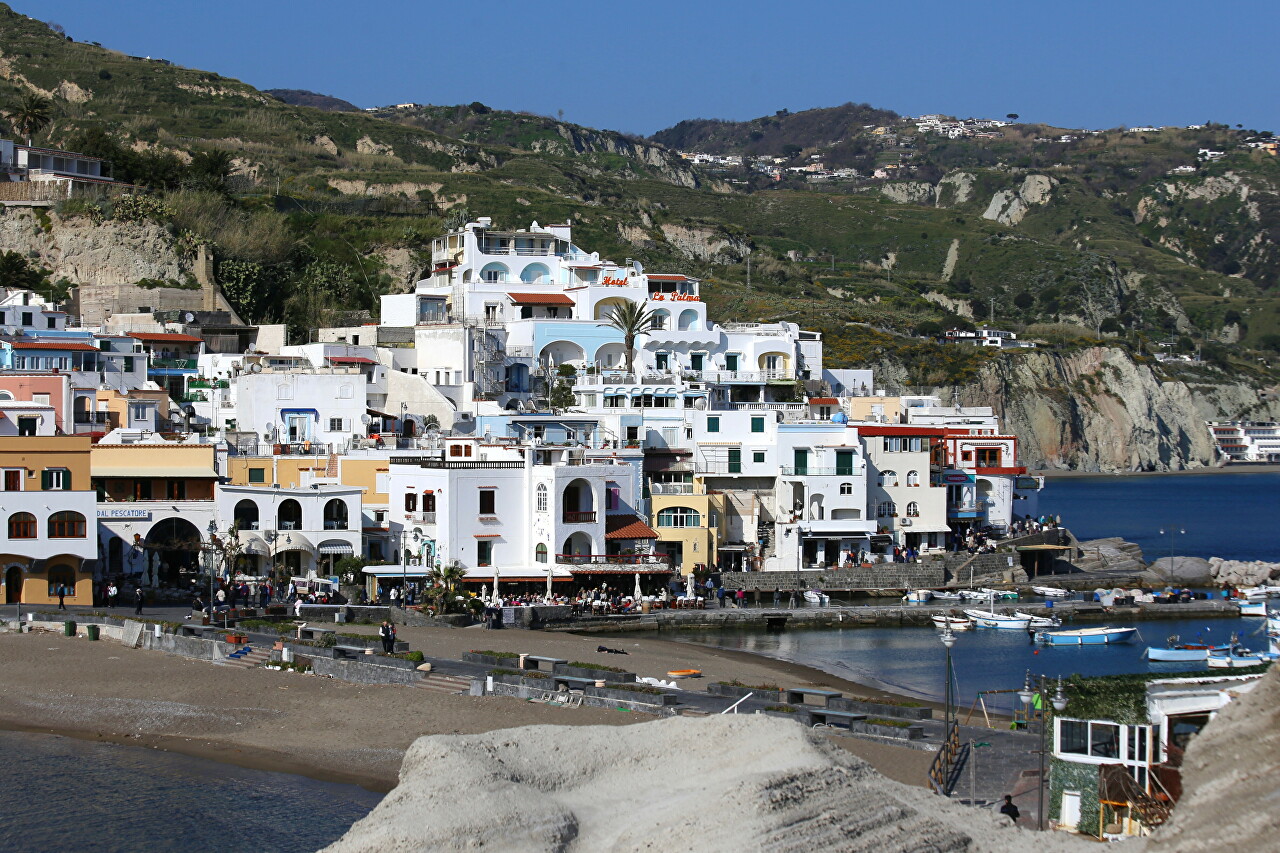 The fishermen were terrorized by African pirates, and a stone tower was built on top of the cliff where the villagers hid during the raids. Hermit monks settled near the tower, they also watched the sea and warned the villagers about the danger. In 1808 the island was besieged by a British squadron and all the buildings on top of the cliff were destroyed by artillery fire. 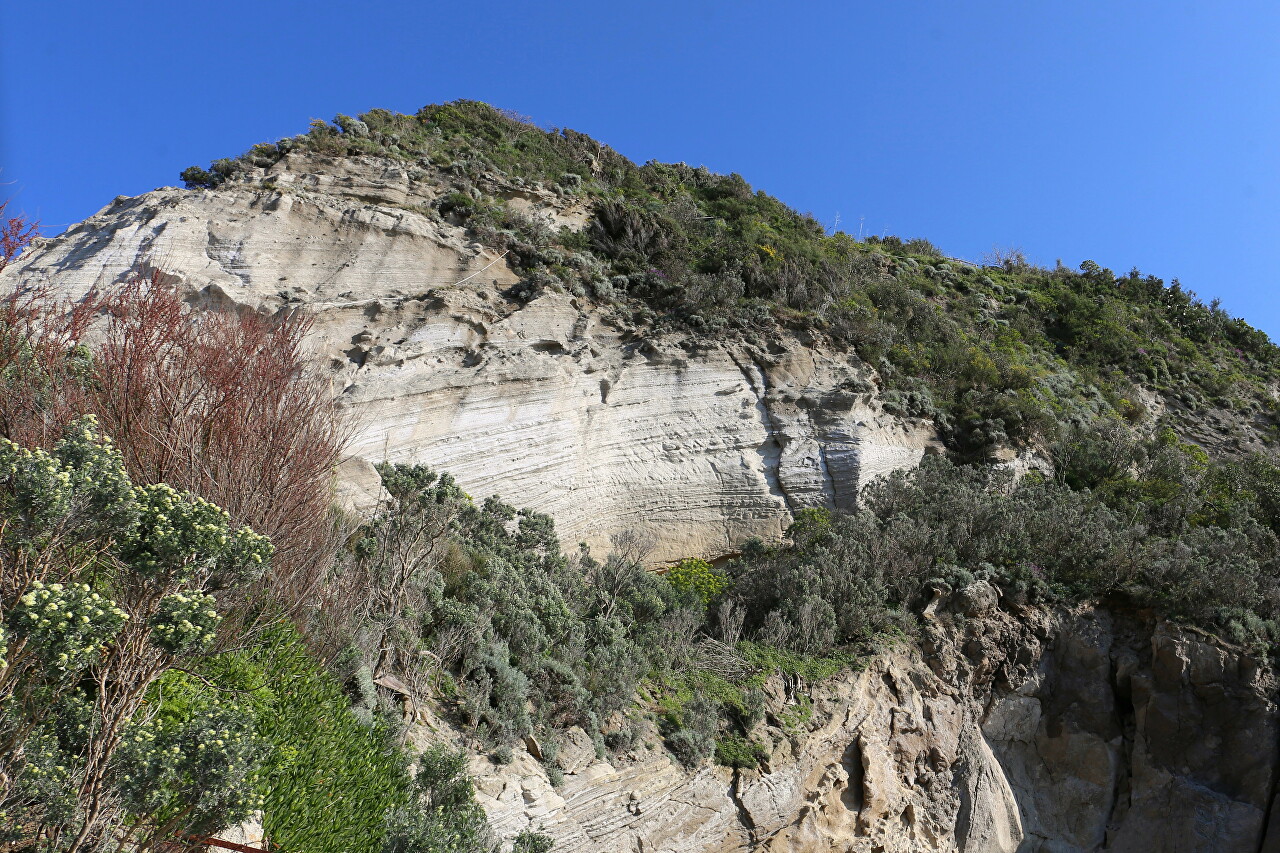 In the western part of the rock there is a gentle lava tongue, which leads to a path cut in the soft tuff. 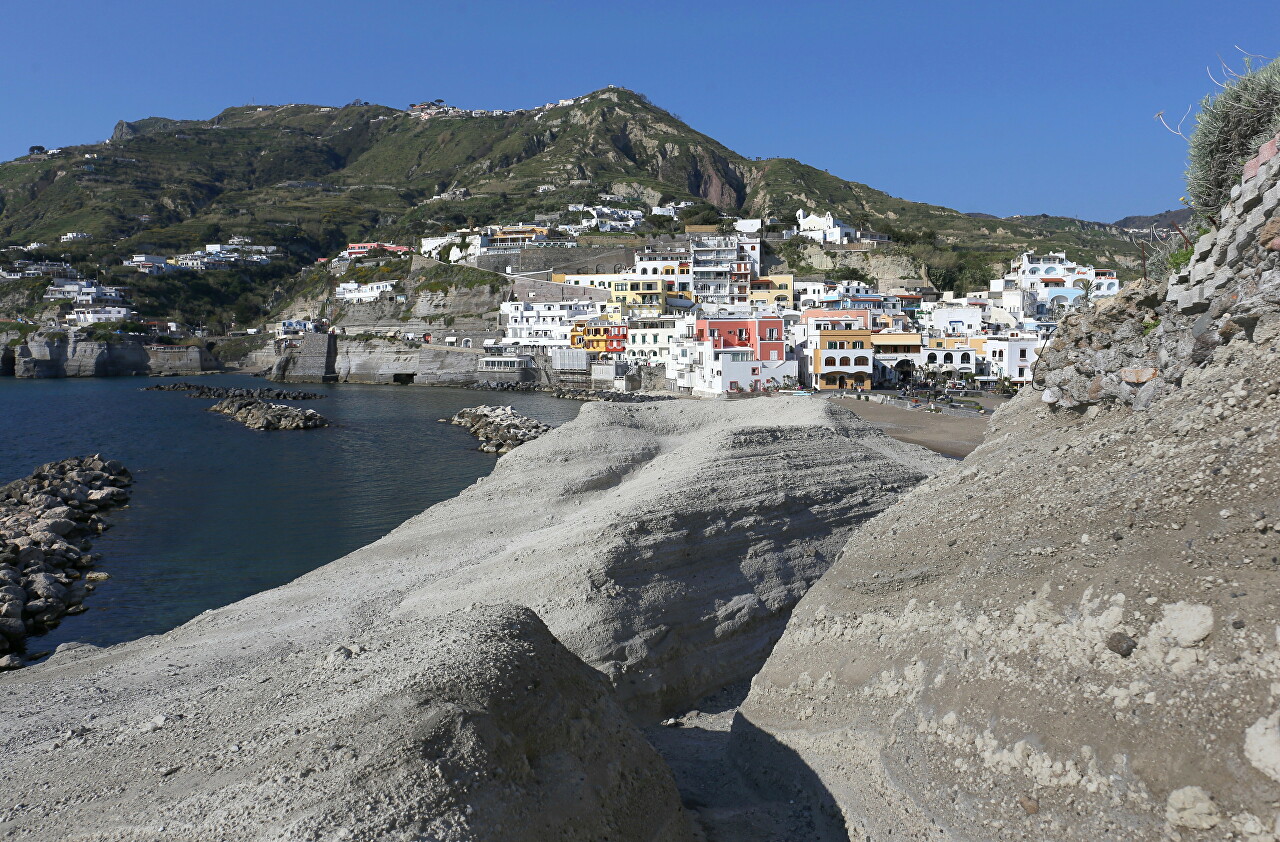 On some maps, there is a path leading to the top, my plans were to climb to the top of the cliff, where the ruins are preserved the skete and the watchtower, but in this language my ascent ended. Up the steep slope went steps cut in the rock, the entrance to which was blocked by a red ribbon and a sign of rockfall. The path itself was lost in dense undergrowth at the first few meters - it had clearly not been used for a long time. 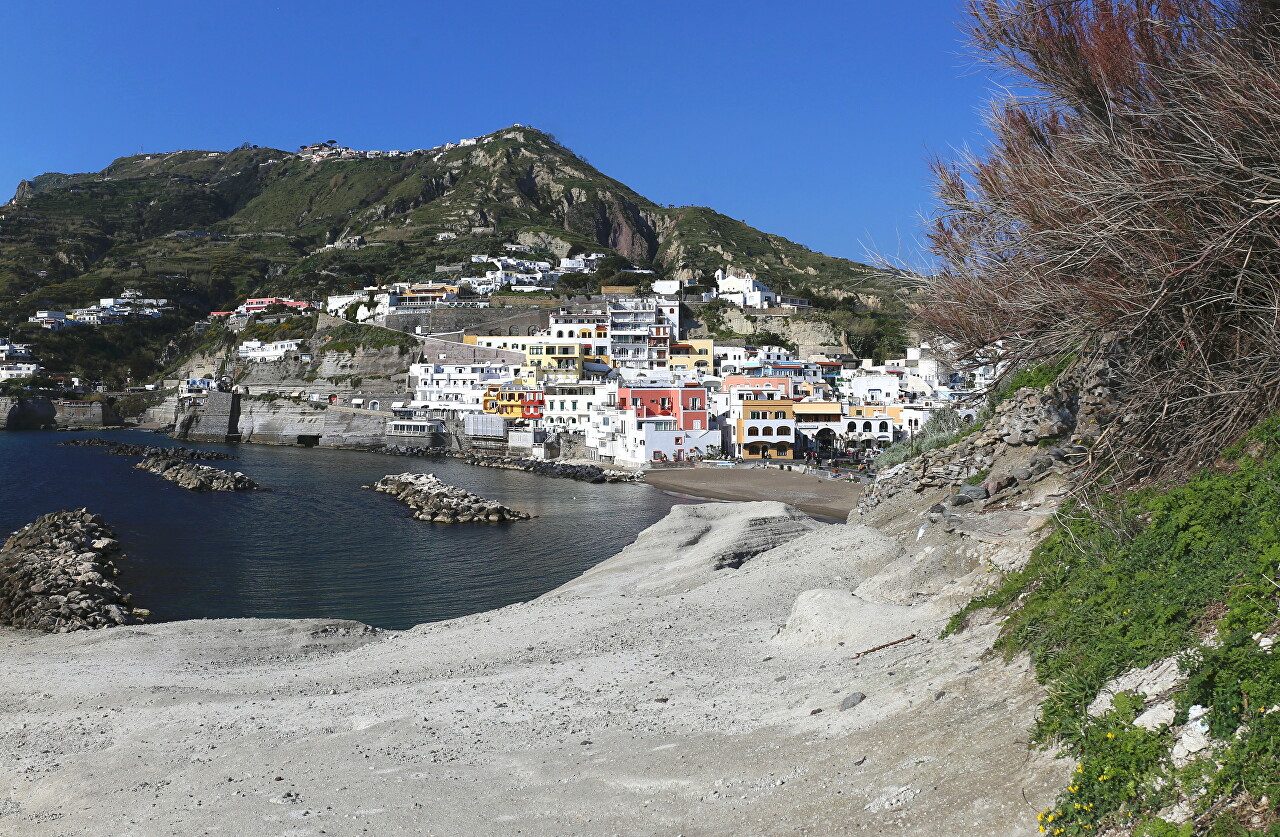 It remains only to contemplate the panorama of the coast, thanks to the fact that the lava tongue formed a wonderful viewing platform. 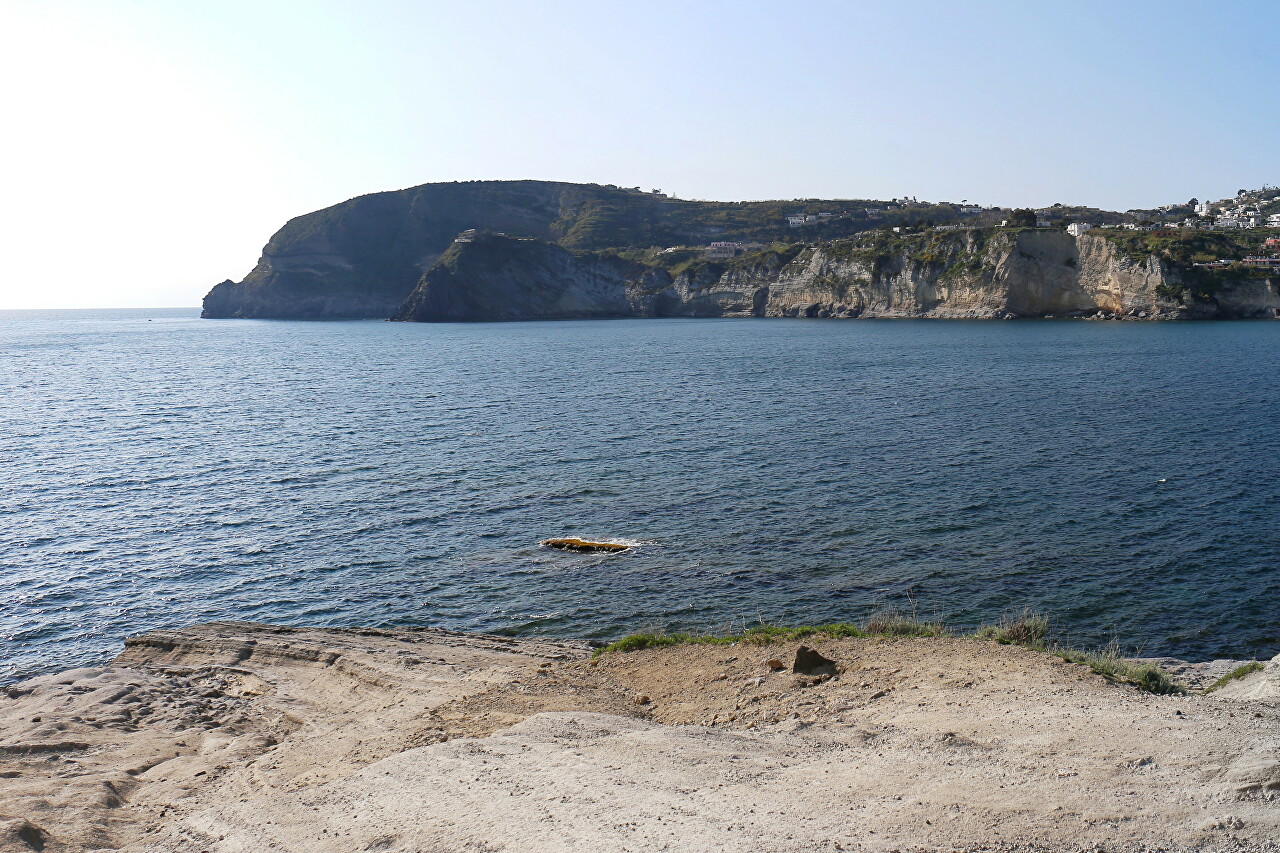 On the left, we can see the southwestern tip of Ischia-Capo Negro (black Cape), and Punto Chiarito on its background. 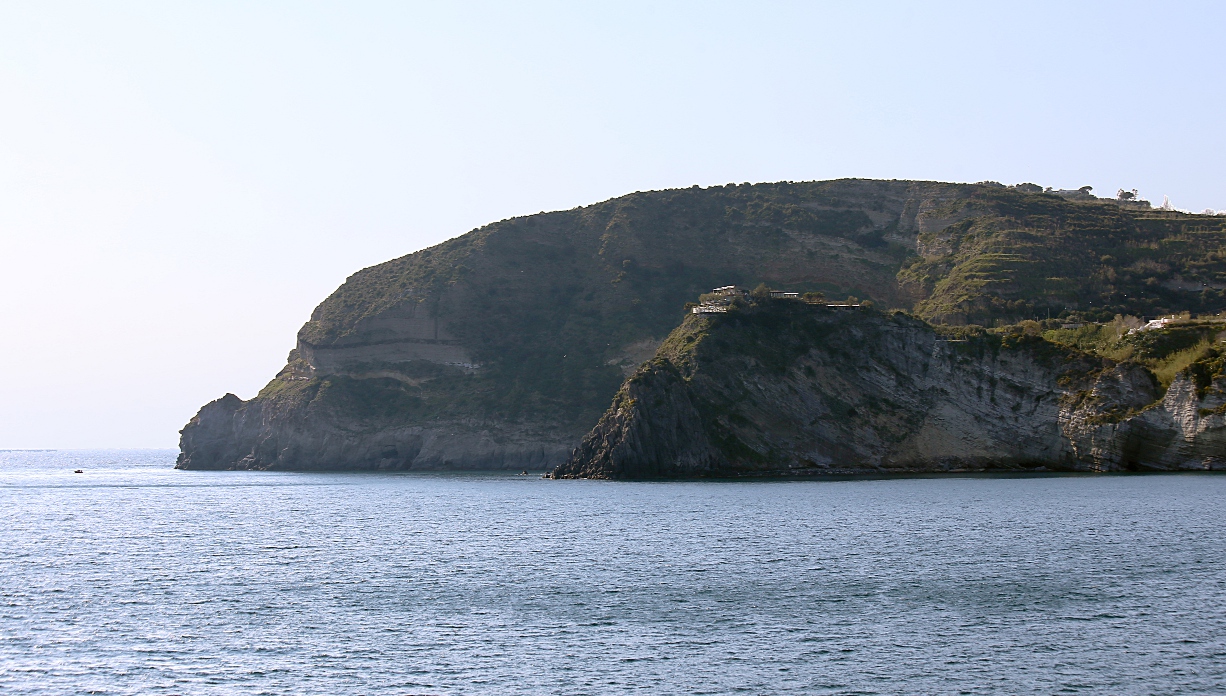 Between them and Sant'Angelo stretches a high steep Bank. 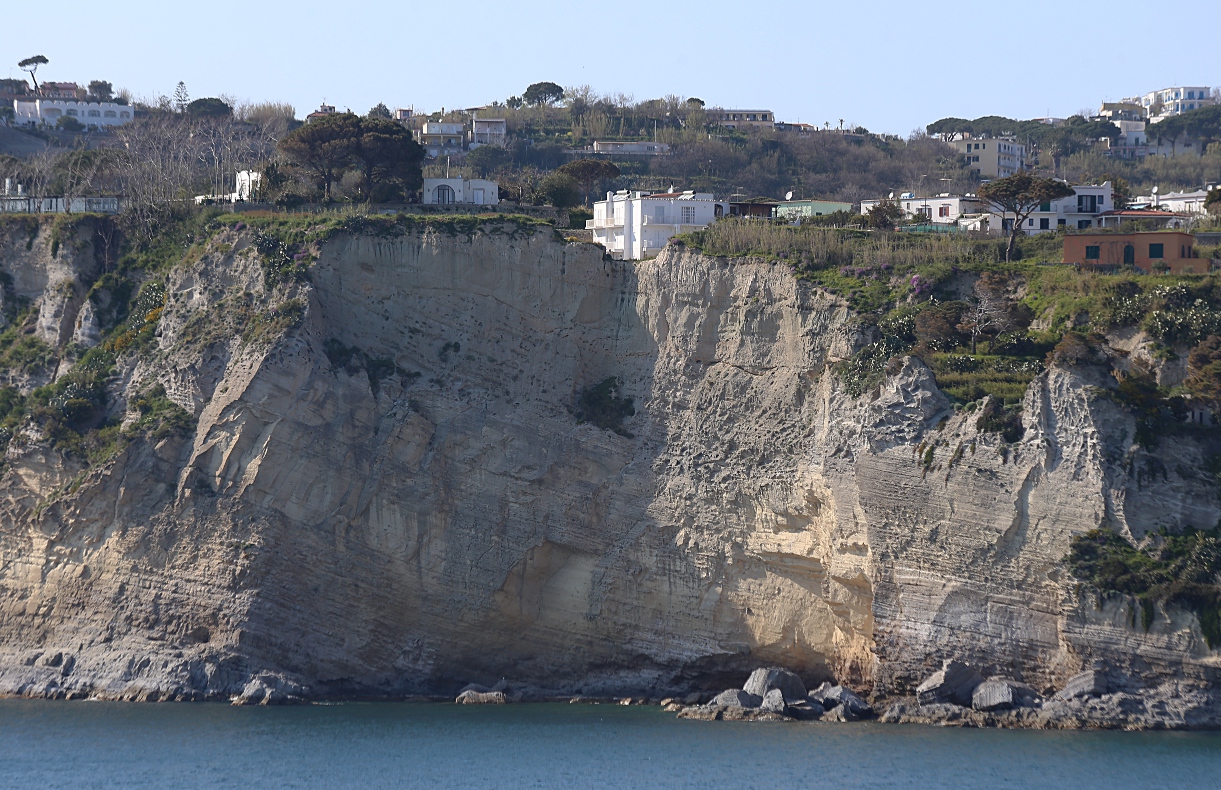 Above the cliff are small hotels built on the exits of thermal waters, as evidenced by light clouds of steam rising here and there. 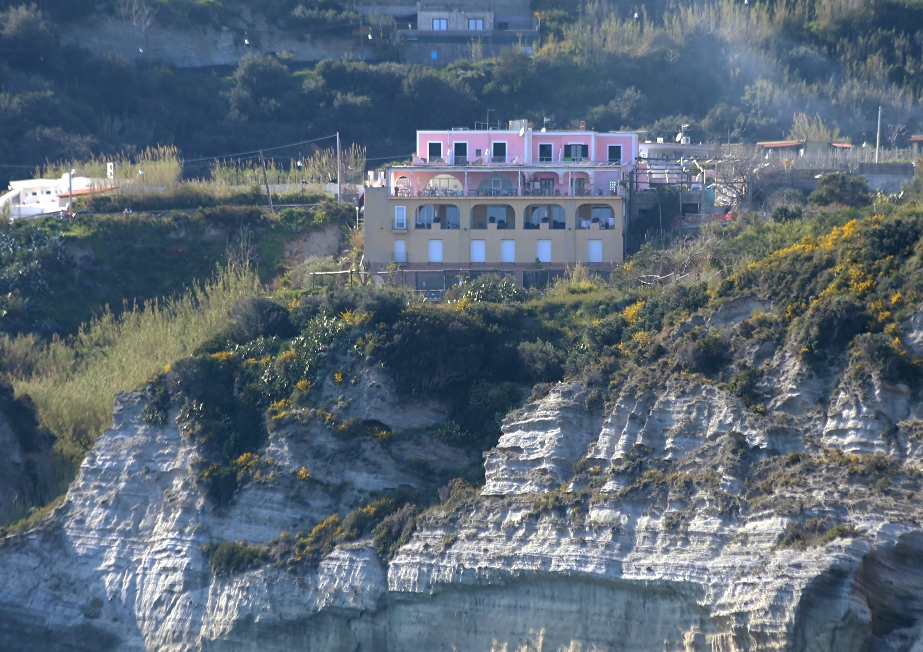 Closer to Sant'Angelo, the arches of the Romantica SPA hotel (Park Hotel & Terme Romantica 4*) can be seen above the road. 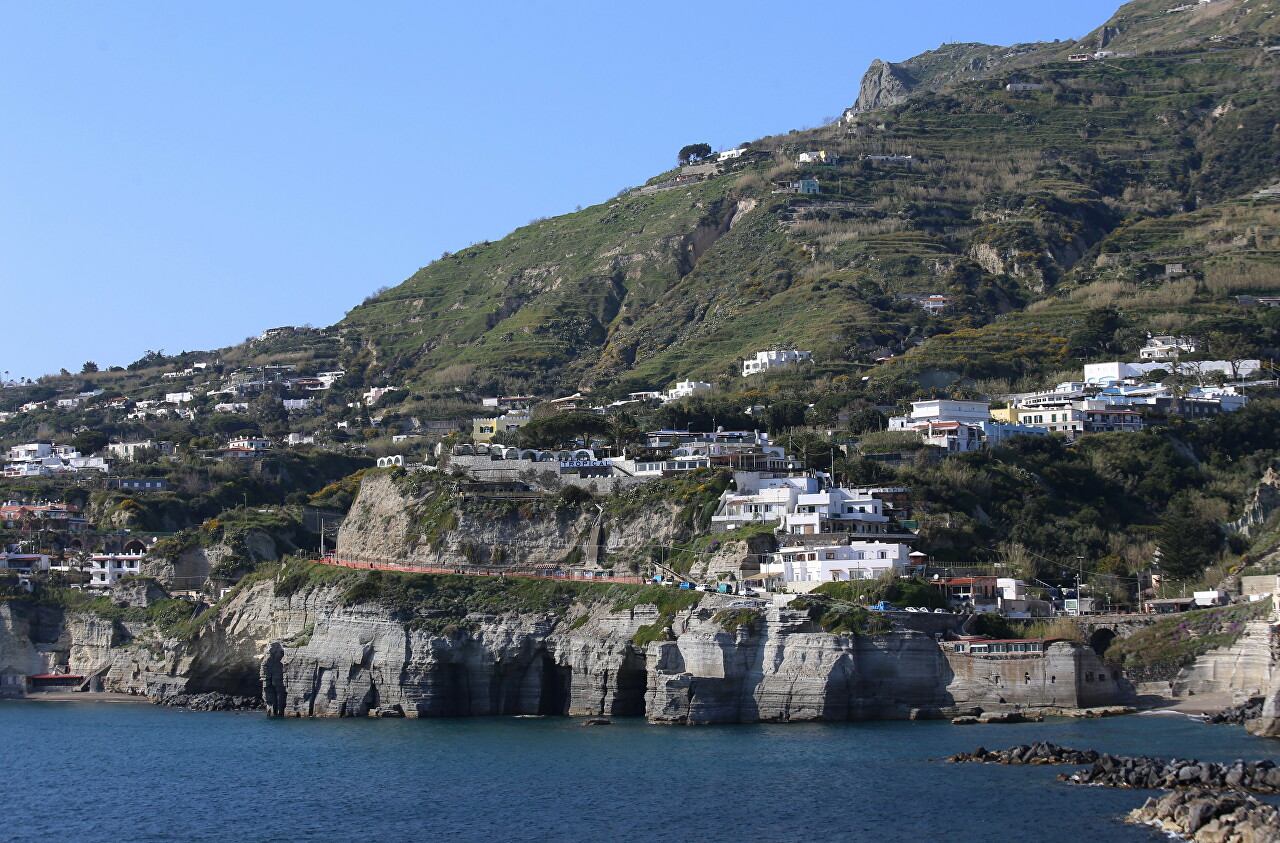 Below the hotel there is a small beach and a restaurant carved right out of the rocks. 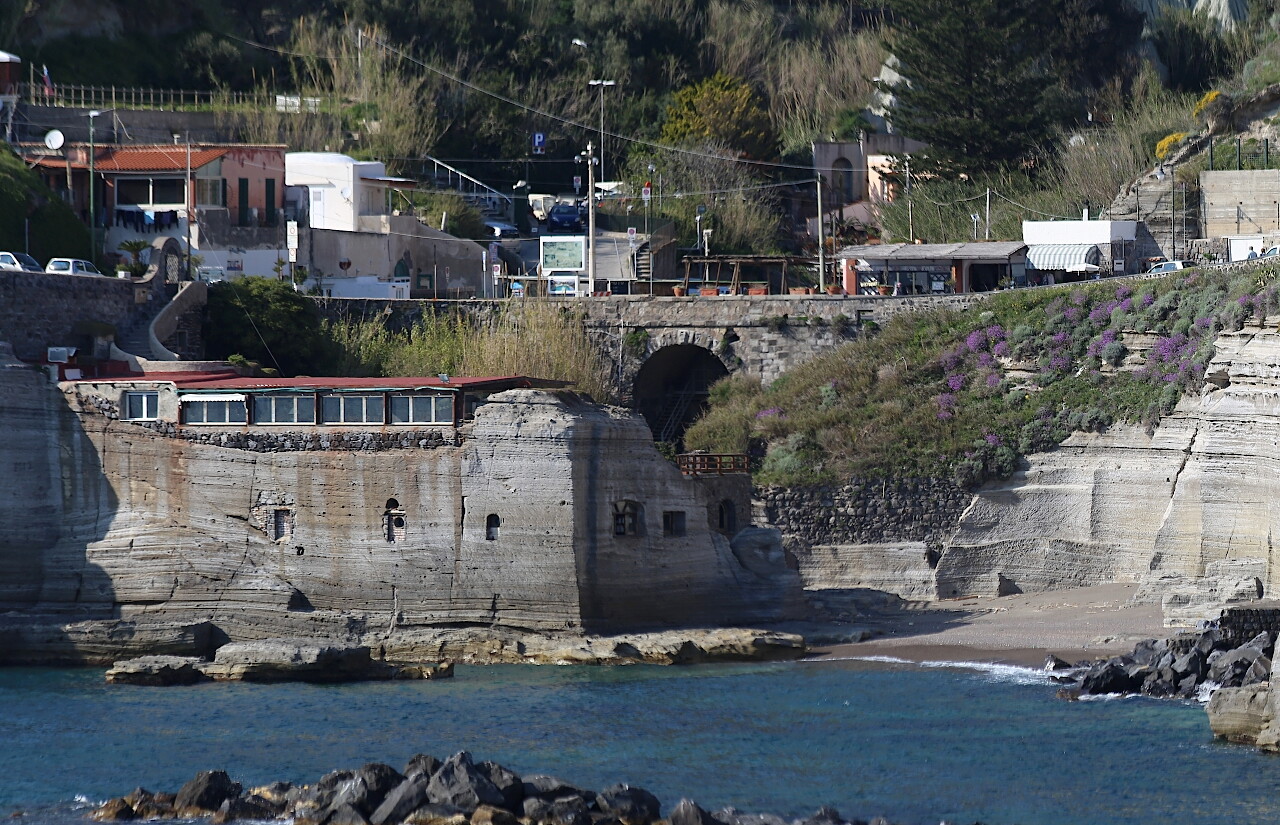 On the other side of the beach is the restaurant Deus Neptunus Ischia. 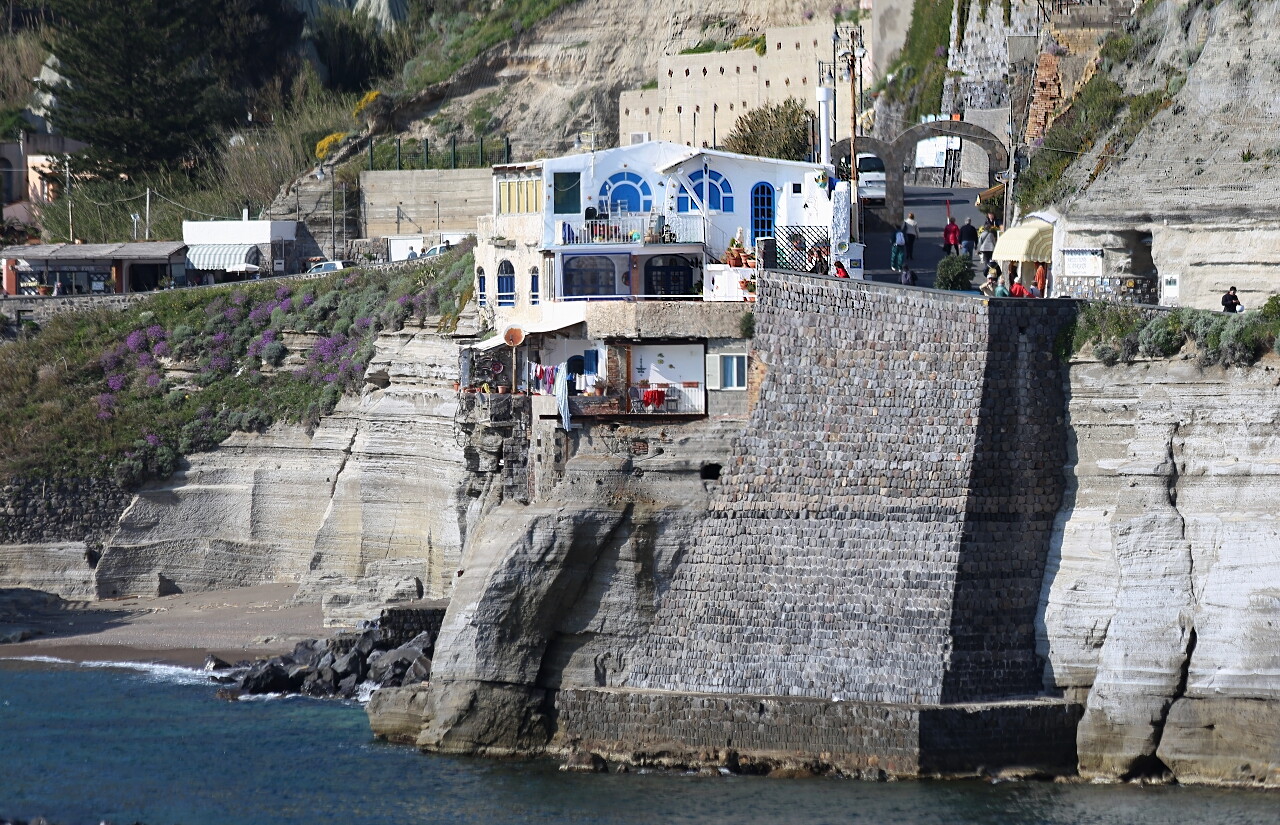 Closer to the water is the hotel and restaurant Casa Celestina. 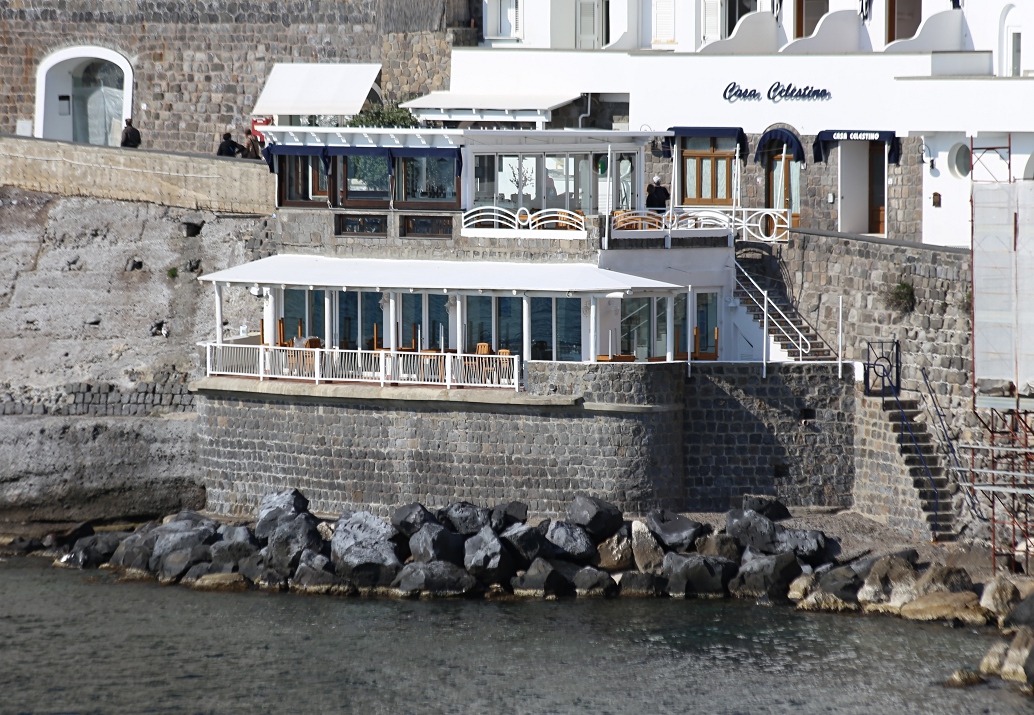 Sant'Angelo is no longer a fishing village, but a famous resort, expensive and prestigious. 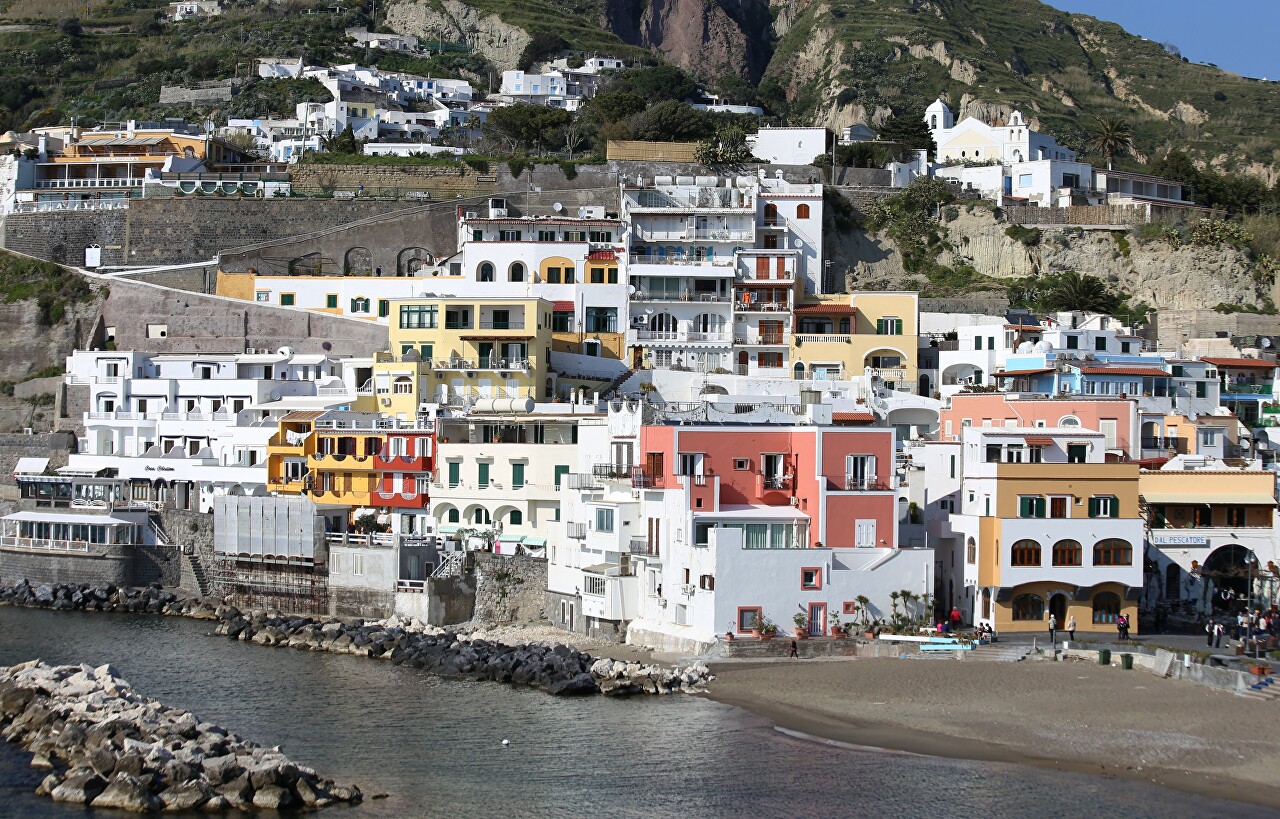 The most famous guest of the town is Angela Merkel. The German Chancellor and his wife have been spending their summers here for many years holidays. 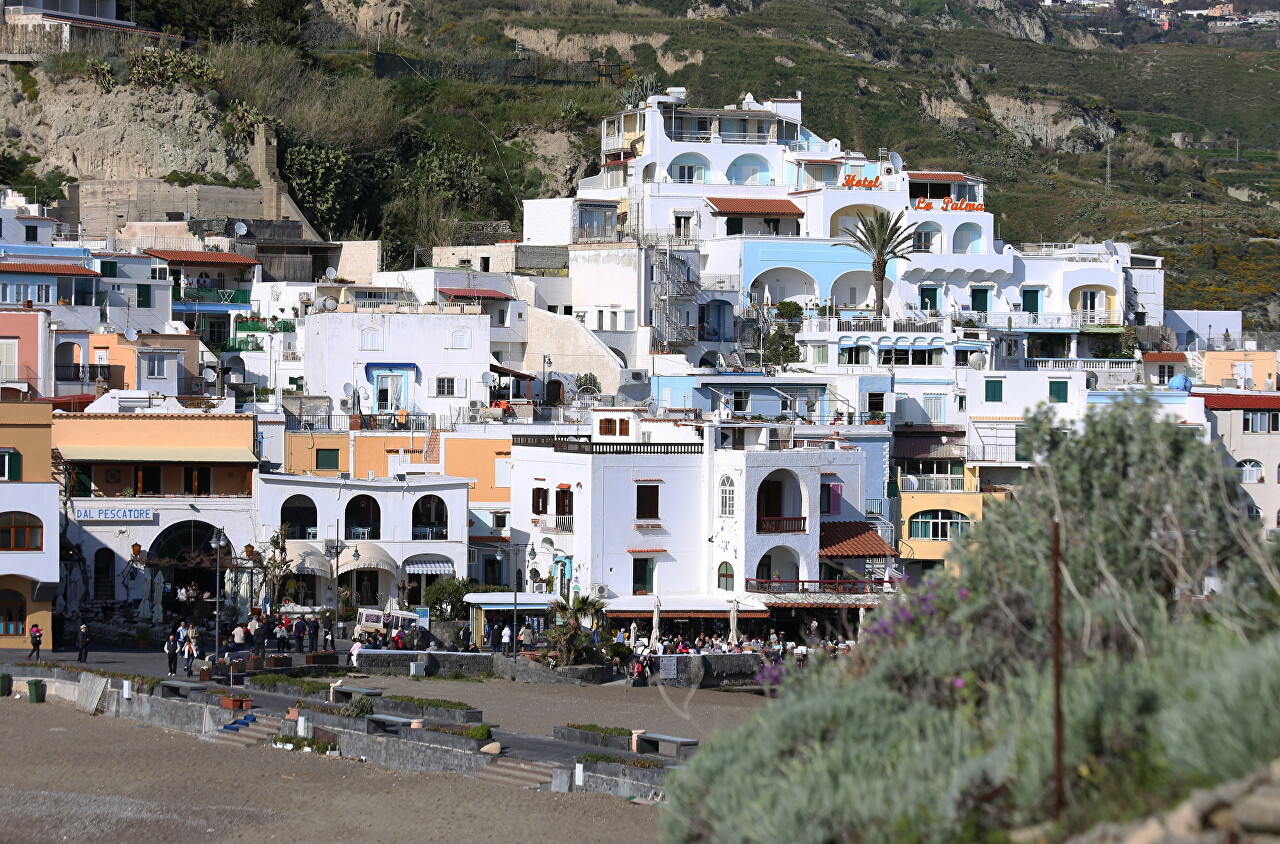 Stone embankments protect a wide sandy beach from the waves. 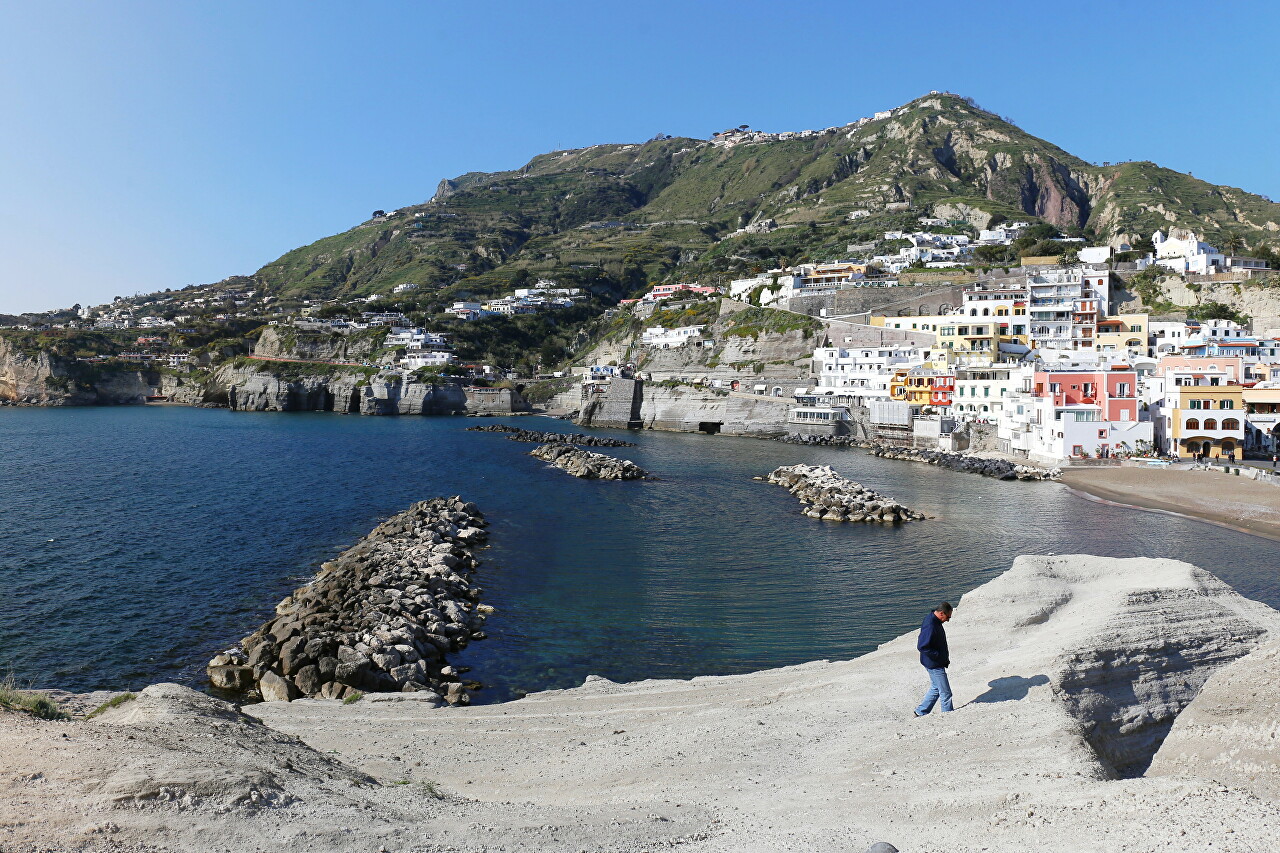 At the highest point of the town, you can see the Church of St. Michael the Archangel (Chiesa di San Michele Arcangelo). We'll be there again. 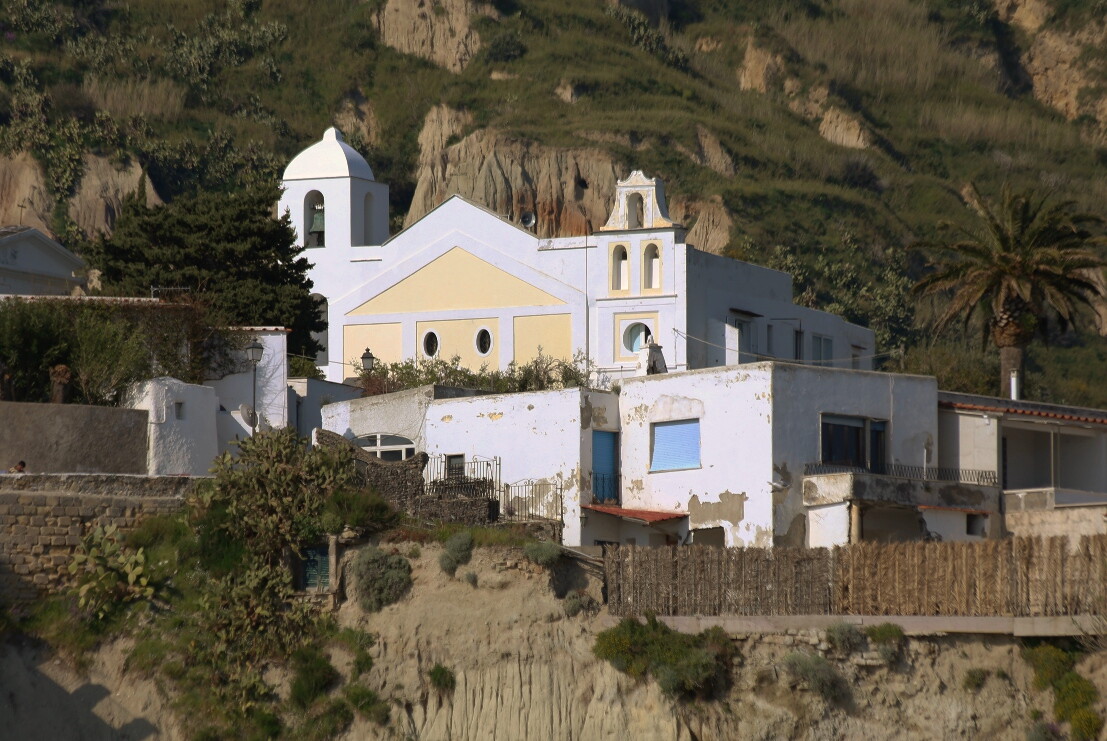 The fault zone, which stretches along the southern coast of the island, from Sant'Angelo to the Aragonese castle, is saturated with thermal water outlets and fumaroles. The ancient Greeks knew about the healing properties of these springs, now a series of SPA hotels stretches along the fault. 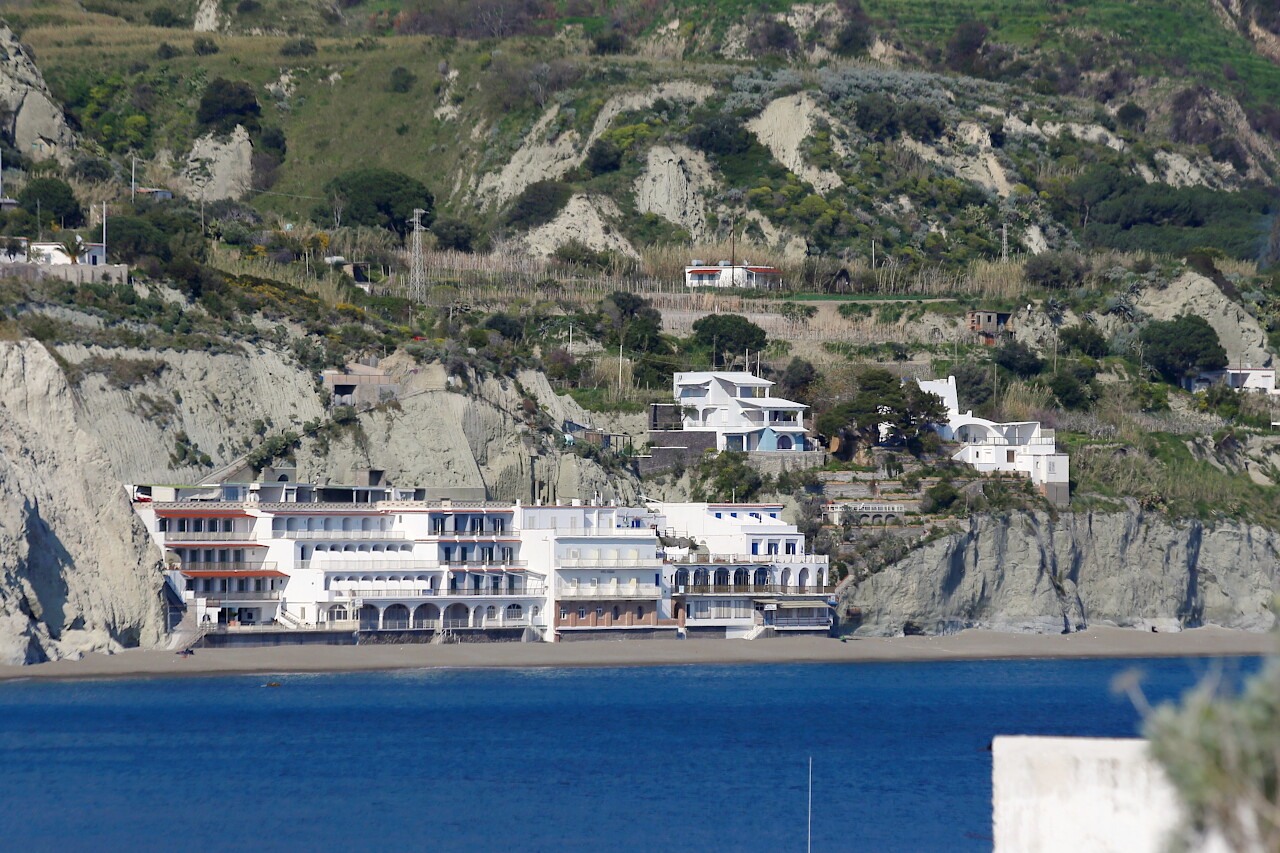