Having settled in a small cozy hotel Del Postiglione ("Postman"), located in a quiet green street near the port, I went to the first acquaintance with the main city of the island - Via Alfredo De Luca and then, Via Antonio Sogliuzzo in the direction of Ischia Ponte. 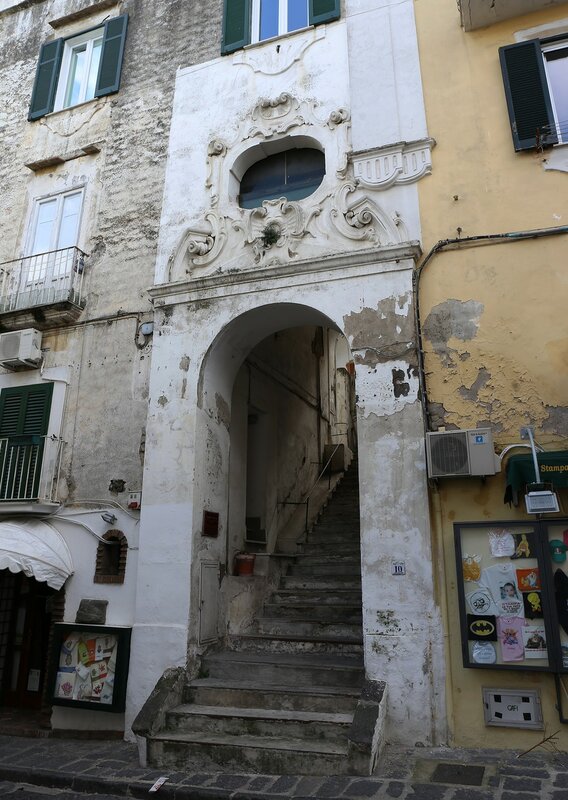 Although on the way from the port I visited the tourist information office, where got hold of the map, but its study left for the evening, and he went where the eyes look - just to "navigate the terrain" and feel the spirit of the town. For the latter, it is better to deviate from the routes trampled by tourists, and delve into the usual residential neighborhoods. 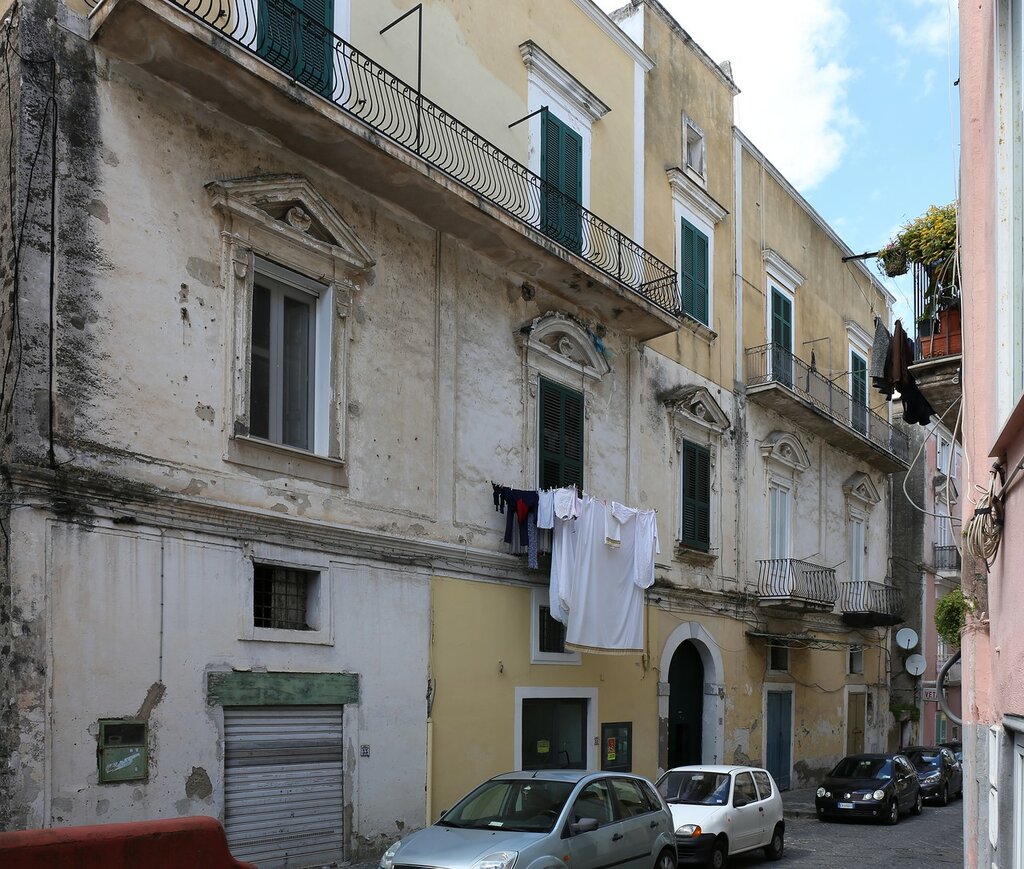 So I turned to the first street, where there were no luxurious restaurants and boutiques, and the facades of the houses did not Shine with impeccable whiteness. 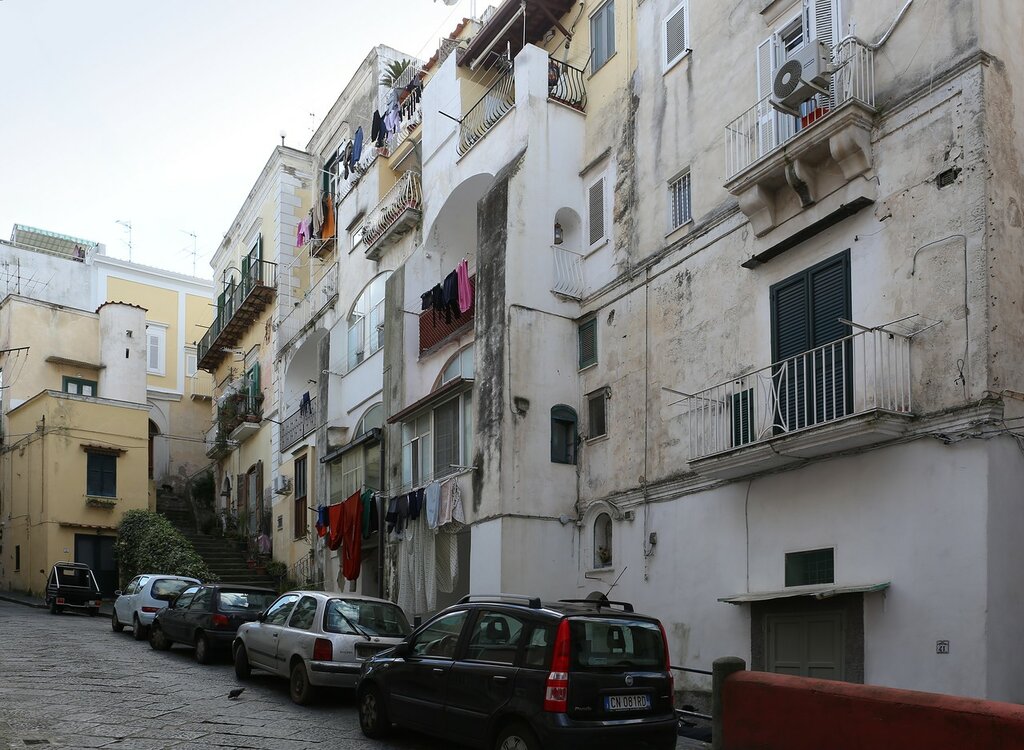 The street was called Via Gian Battista Vico and climbed the mountain. A couple of blocks of nondescript apartment buildings began low-rise buildings, pleasing to the eye with its diversity. As for example, this Villa with an abundance of terraces and balconies. In such houses are often placed family hotels, where more than one room is not like the other, or live a few families in different levels, with a separate staircase and veranda. 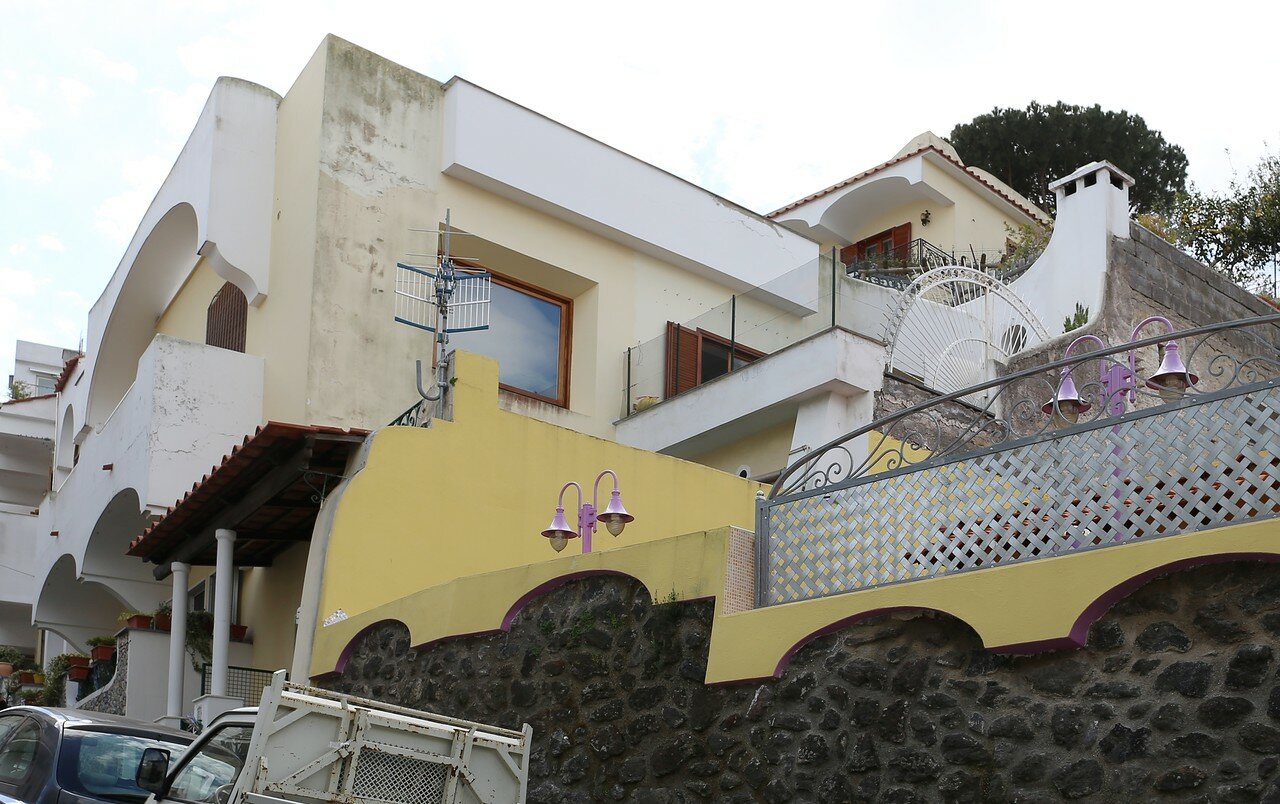 If facades of such houses are covered with beautiful facing materials, then on lateral walls do not hesitate to lay open communications and to hang various mailboxes. 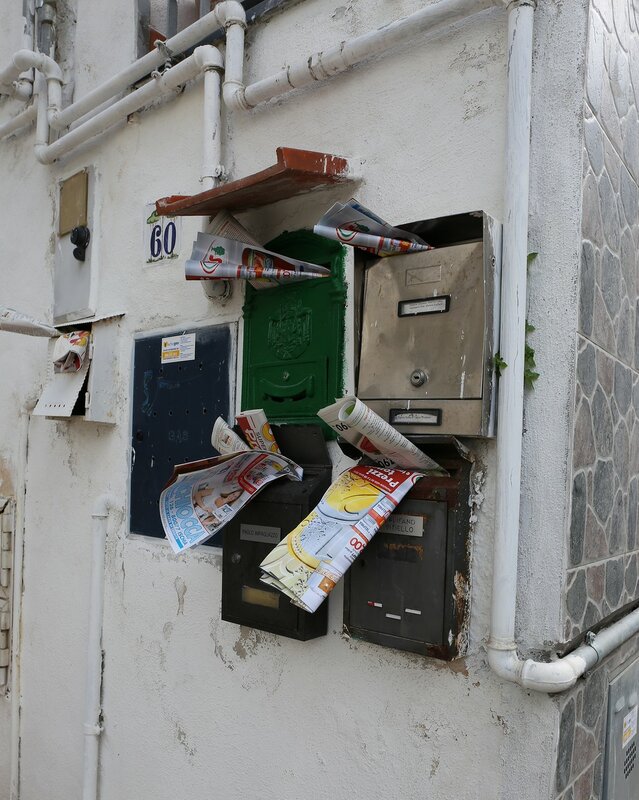 After another quarter to the right revealed an ancient arch, with a ceramic plate Via Procidano, where I turned without thinking. 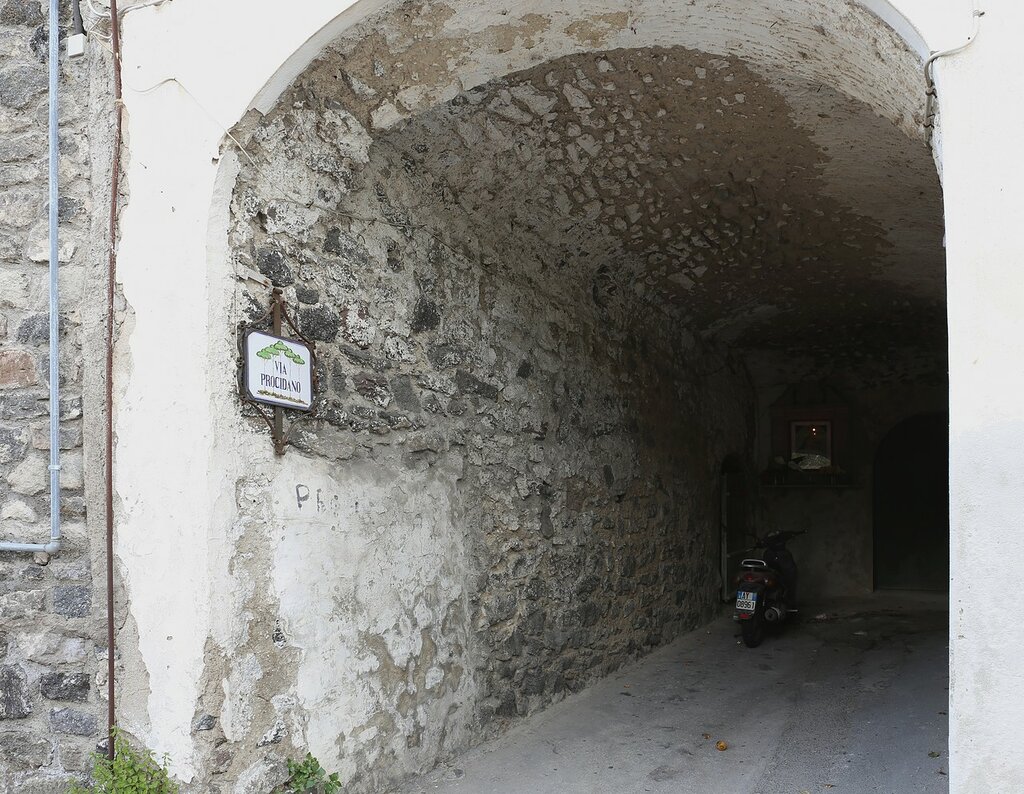 Dark tunnel, making two turns and led into a narrow street leading into the mountain. 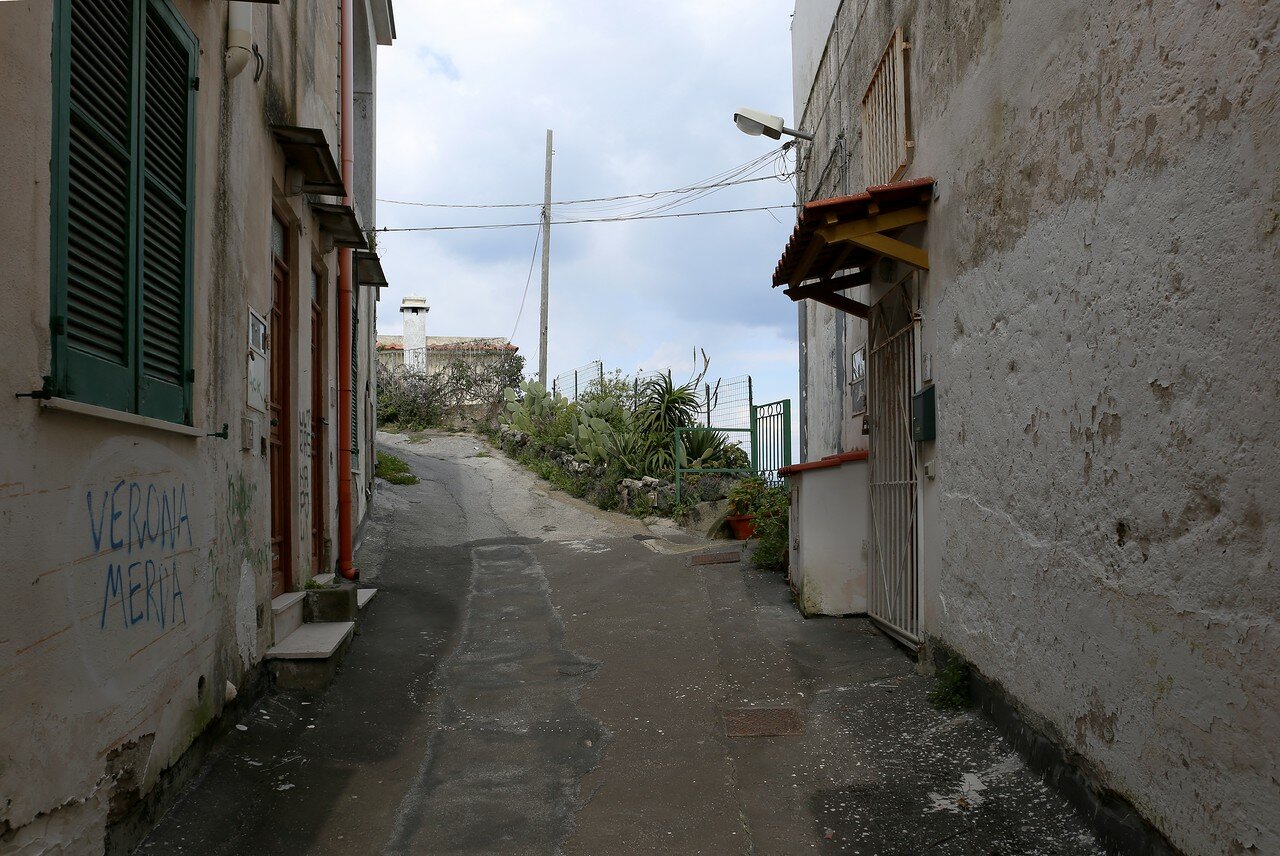 Coming out into the open, I realized I did the right thing, turning into a dark alley - from there we had a wonderful view of the Strait between Ischia and Procida. Perhaps, therefore, the street was called Procidano. 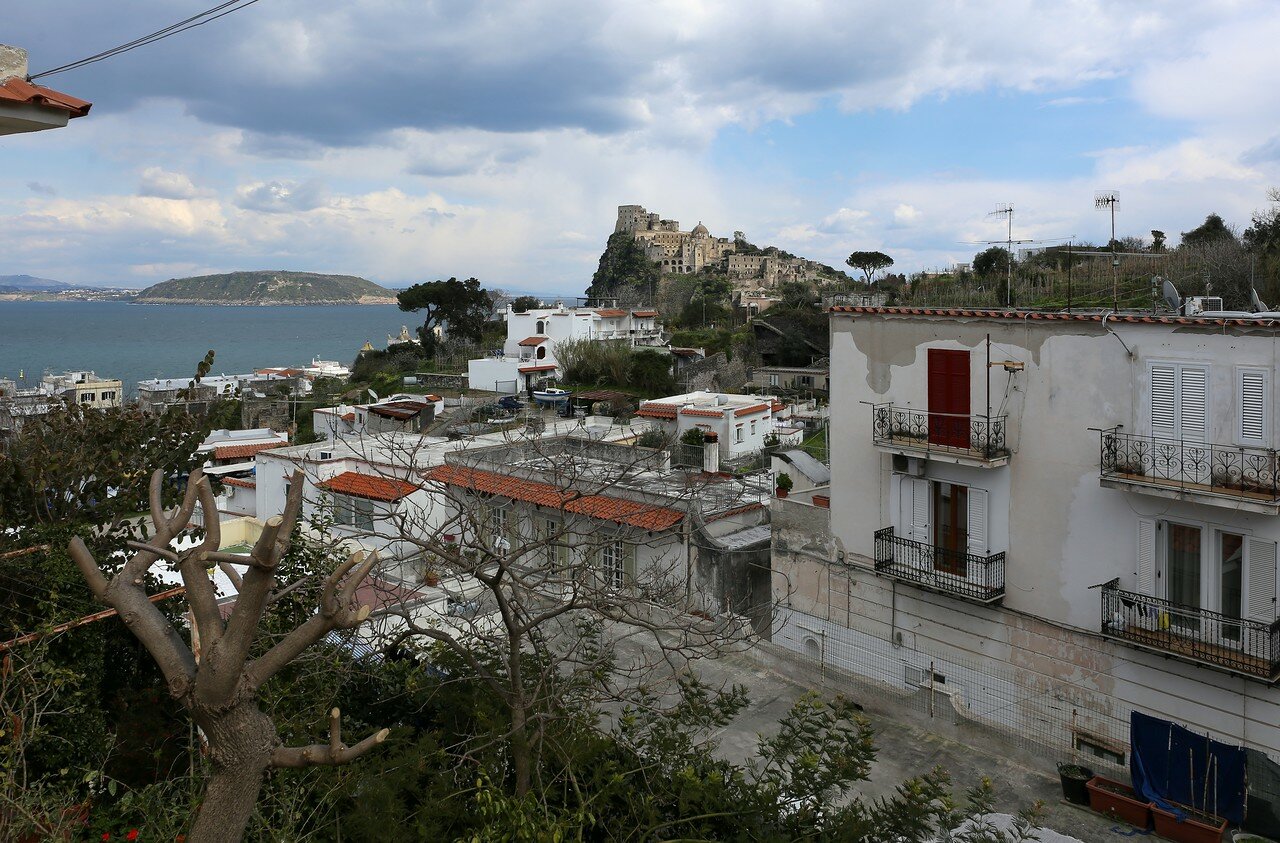 According to the map, at the bottom lies district Cimitero Vecchio (old cemetery). 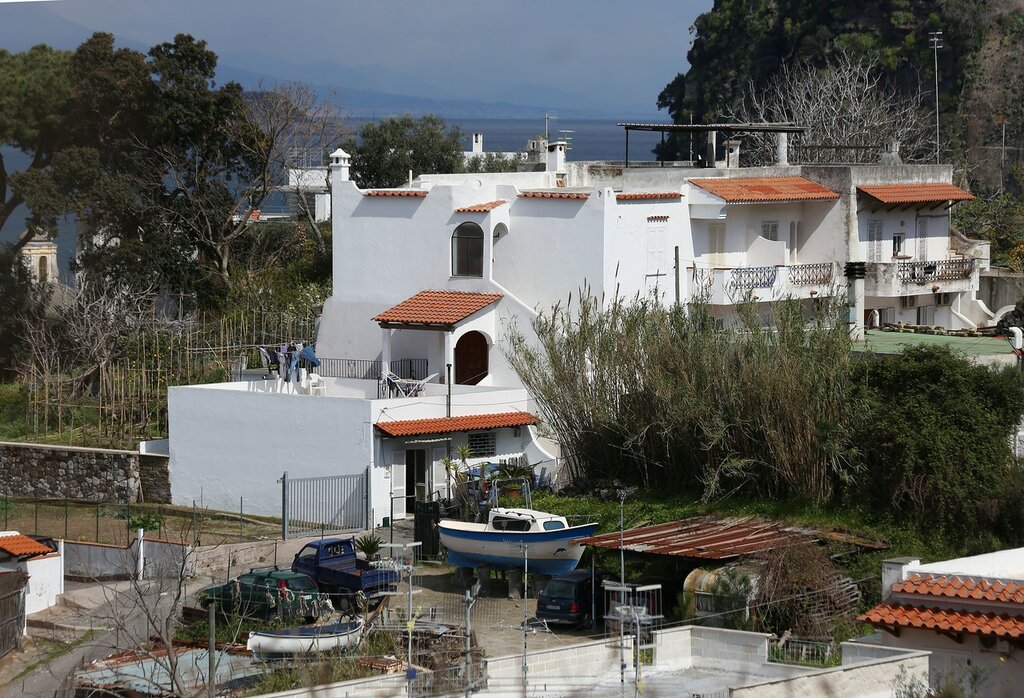 And above its roofs stood the Aragonese castle. 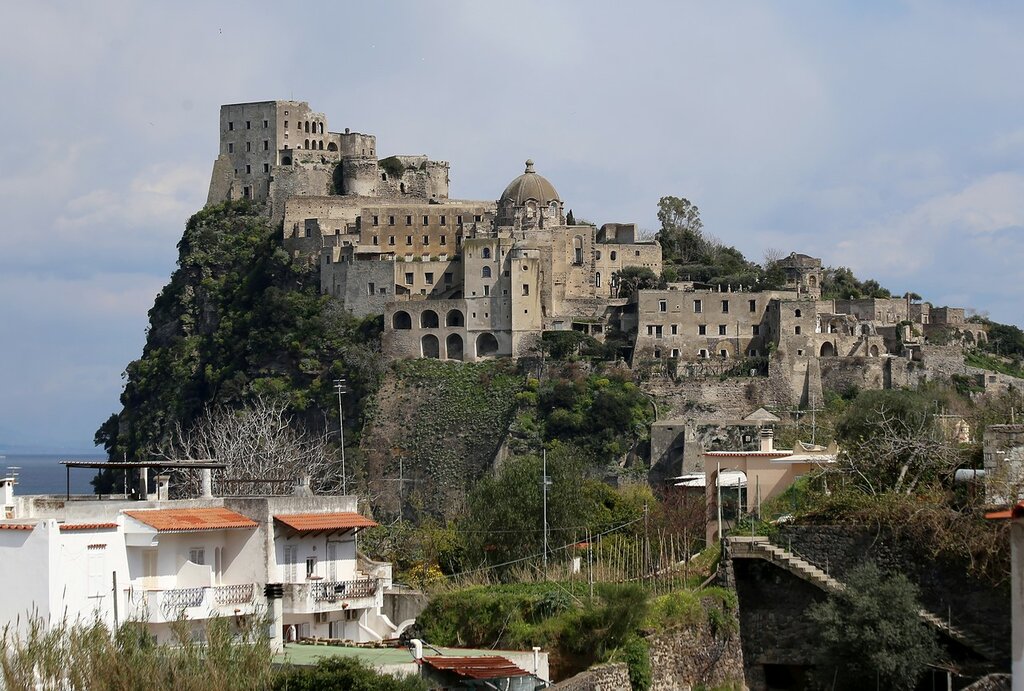 The top of the castle is now occupied by the exclusive hotel Albergo Il Monasterio. 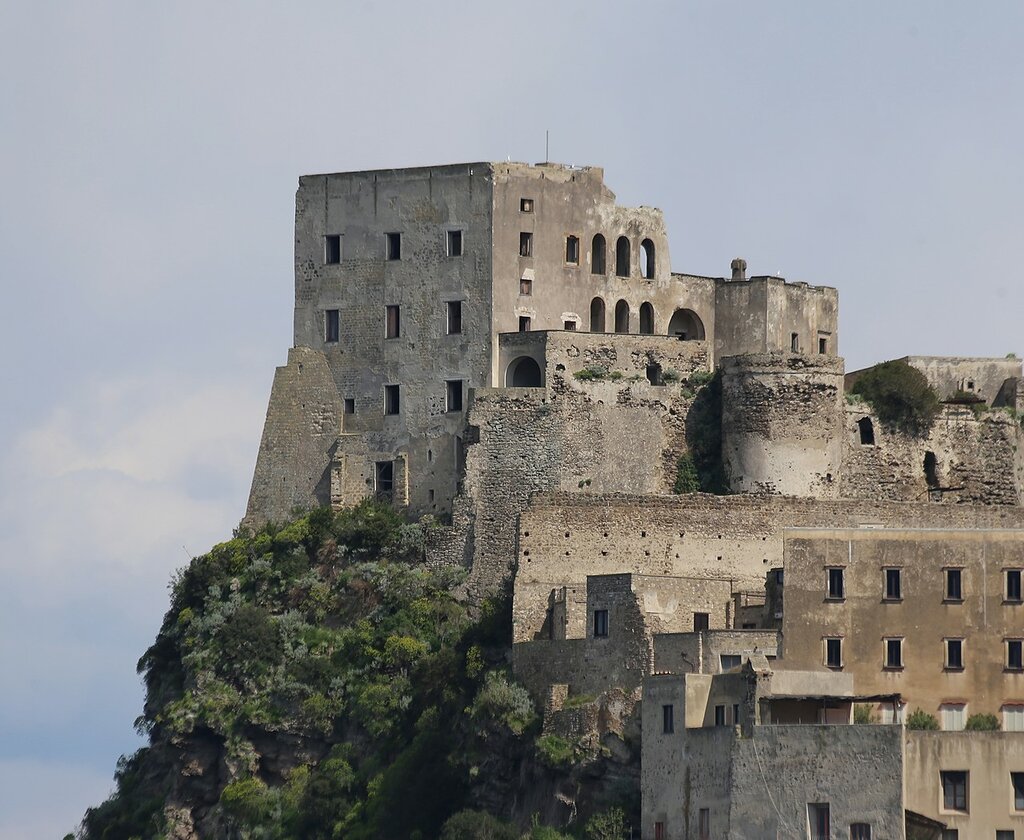 To the right of the hotel is a complex of the convent of the poor and see the dome of the Church of the Immaculate (Chiesa Dell'immacolata). 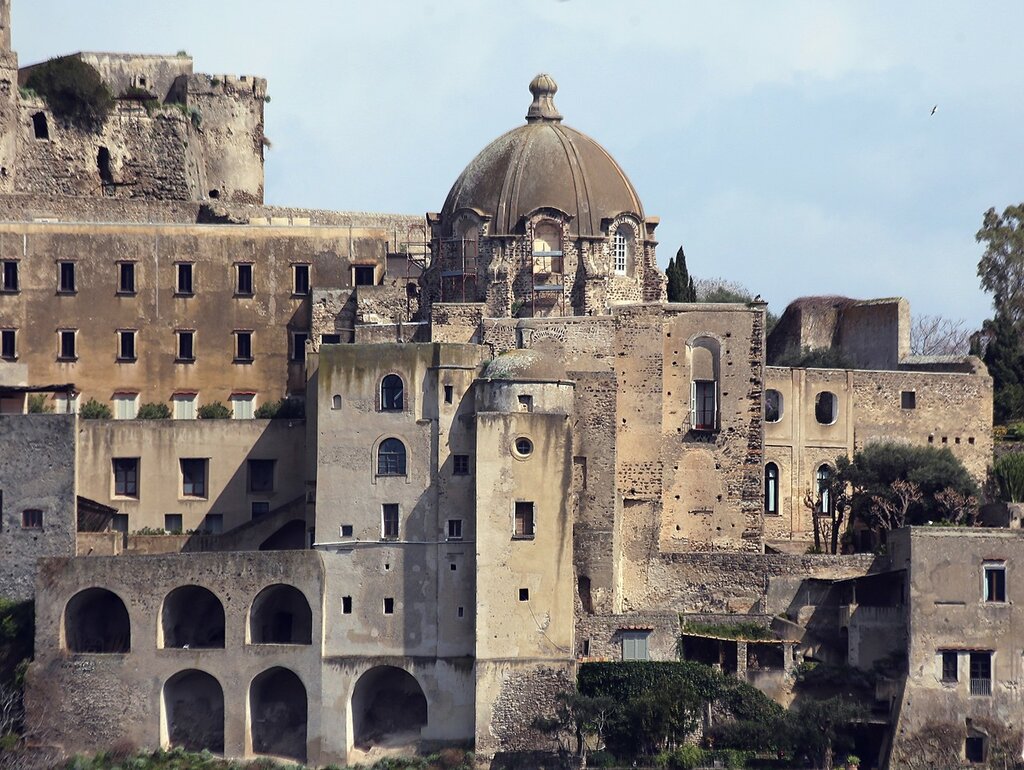 Further to the right you can see the ruins of the Cathedral of the Assumption (Cattedrale Dell'Assunta), destroyed in 1809 during bombardment of the fortress, a squadron of the British fleet. 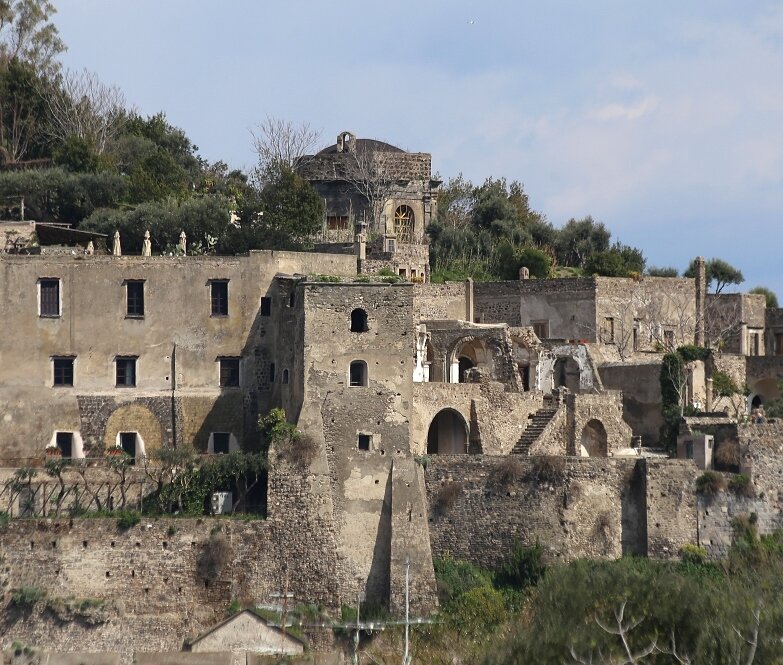 Honestly, the best place (map), where so well visible upper part of of the castle, I more not know. 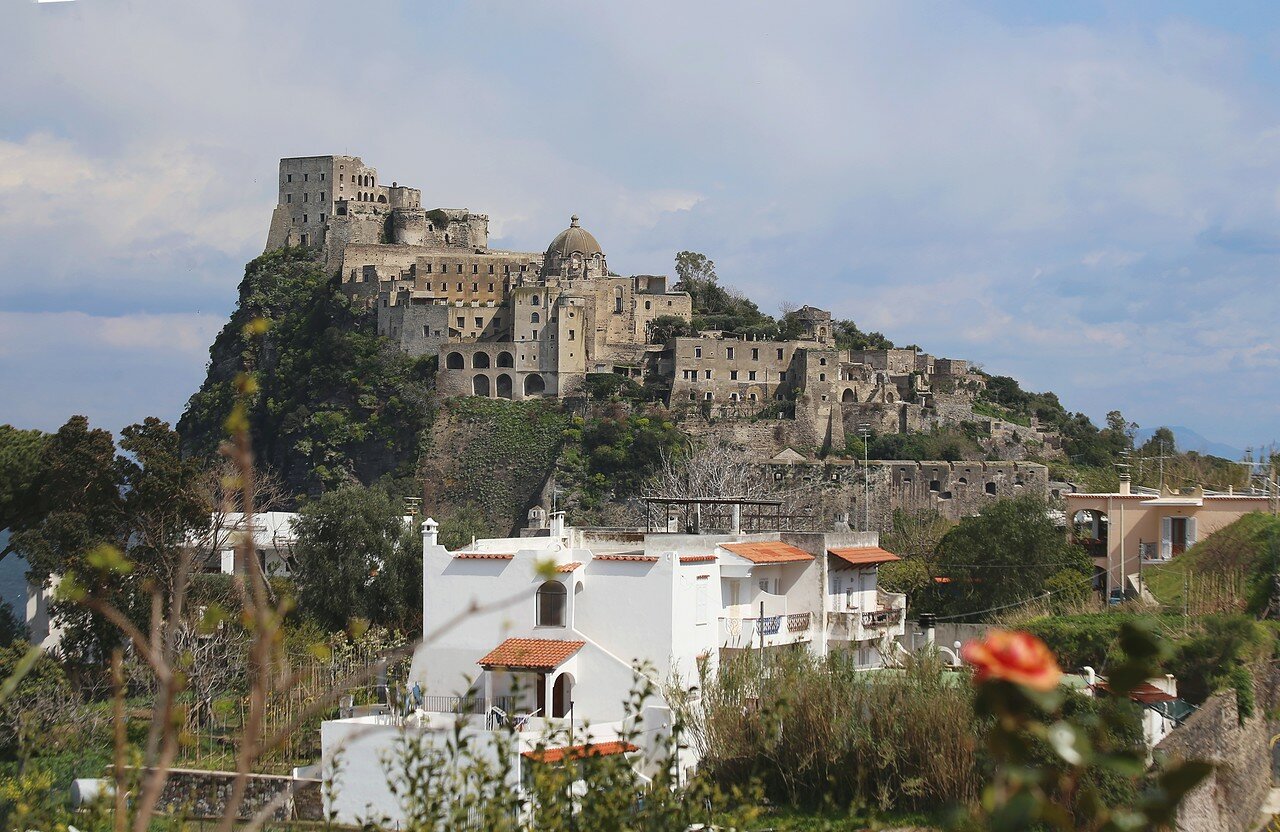 Moreover, in the frame of blooming roses. 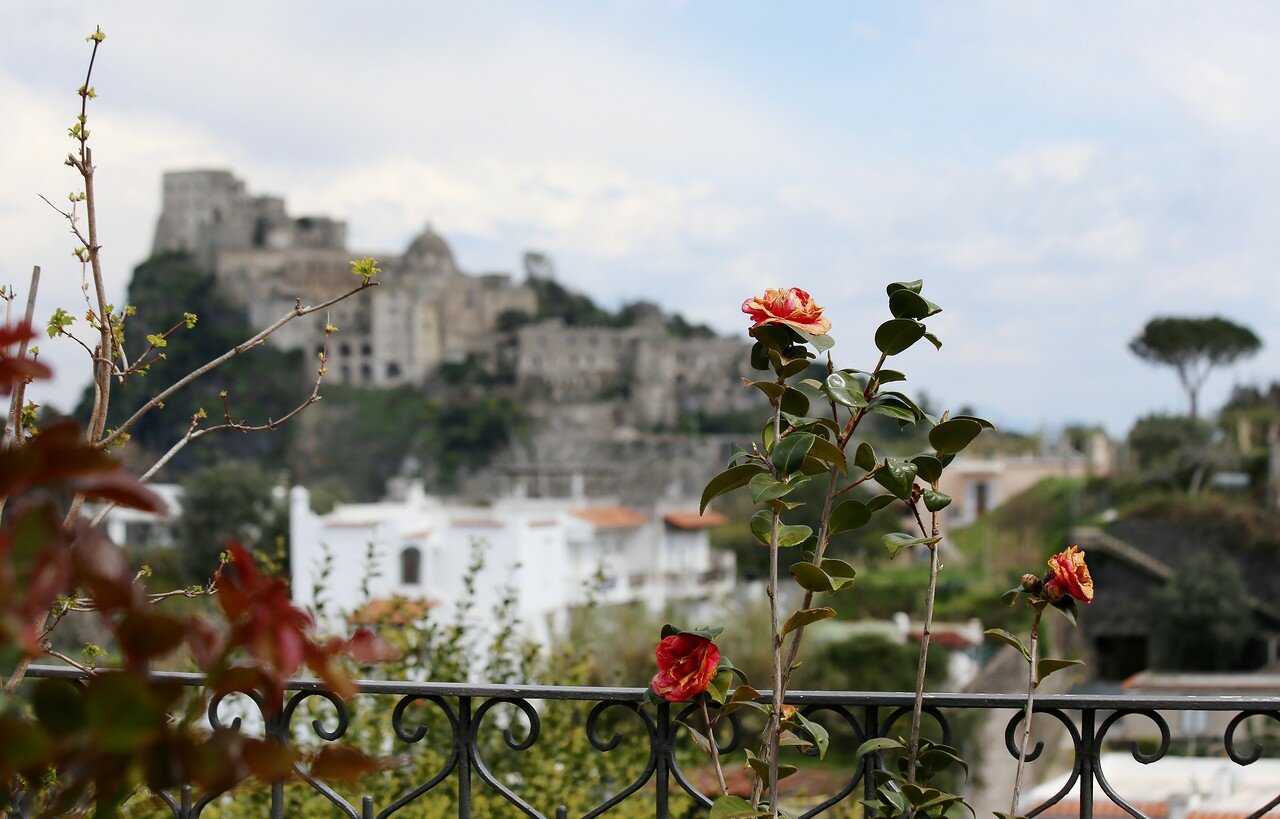 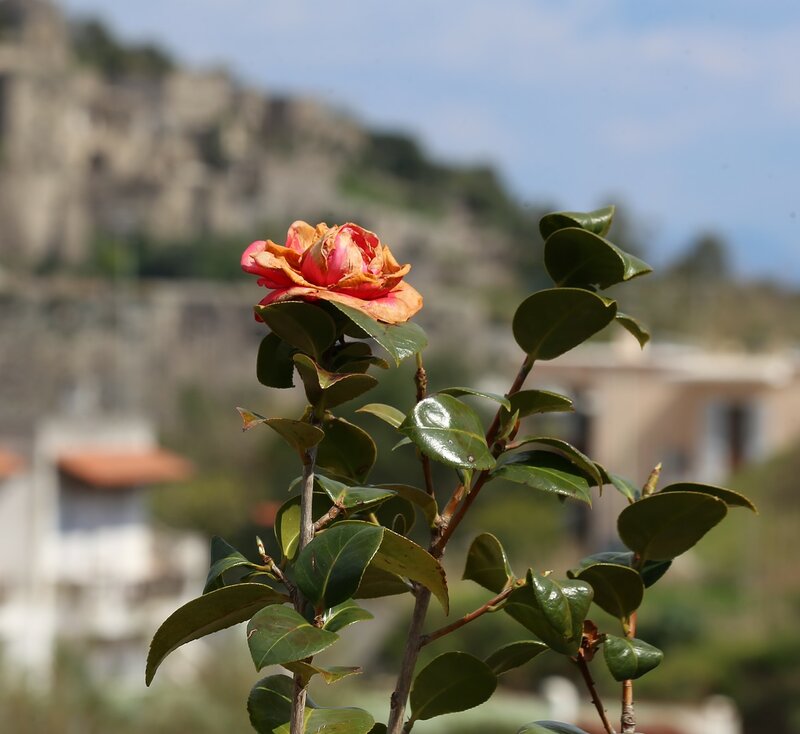 The street with a wonderful view was very short and went out on a wide Via Nuova Cartaromana. Sidewalks on this street are absent completely - they are replaced by a narrow strip of asphalt , separated from the carriageway markings. However, I was able to see, it is quite common on the island. Most of the roads are old trails, designed for the movement of mules, which does not allow to expand the terrain or buildings. 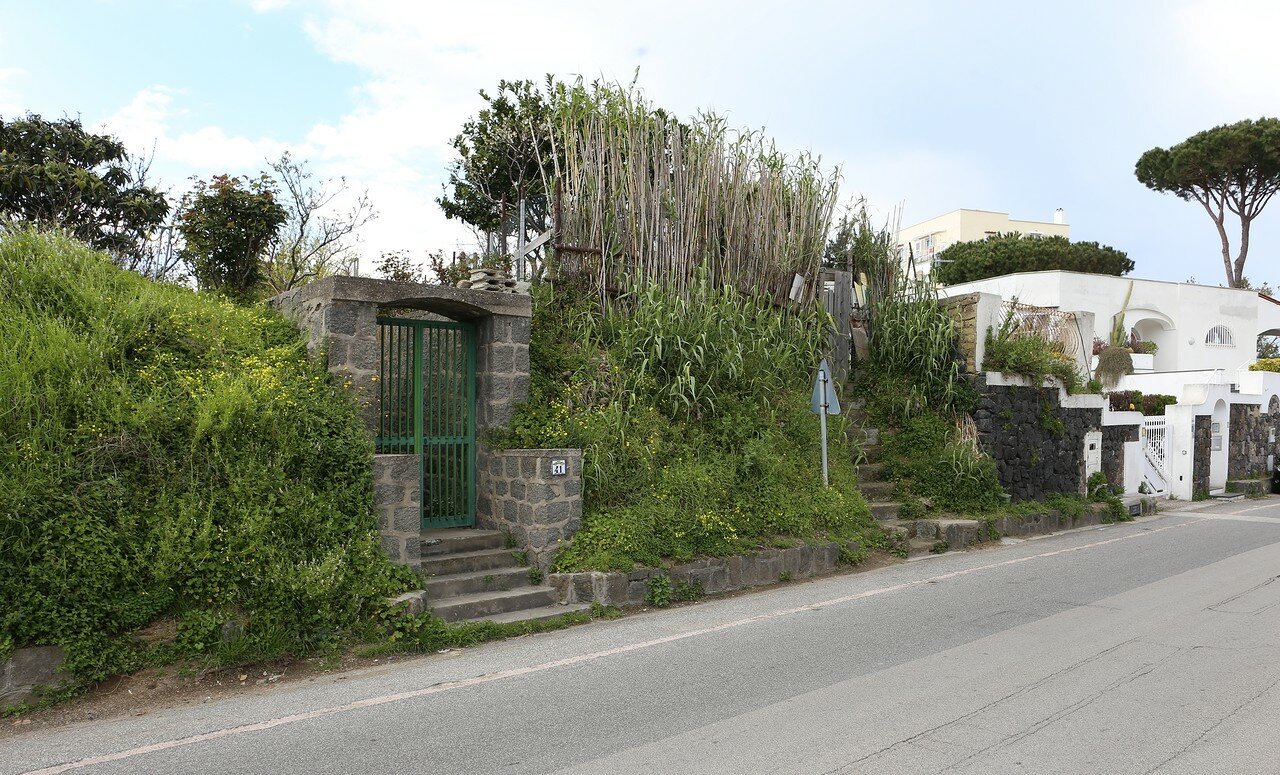 After a hundred meters I was again Via Gian Battista Vico, and a quarter found a small Church named Maria del Carmine (map). The temple was closed, but I was able to look there the next day. In the meantime, I followed. 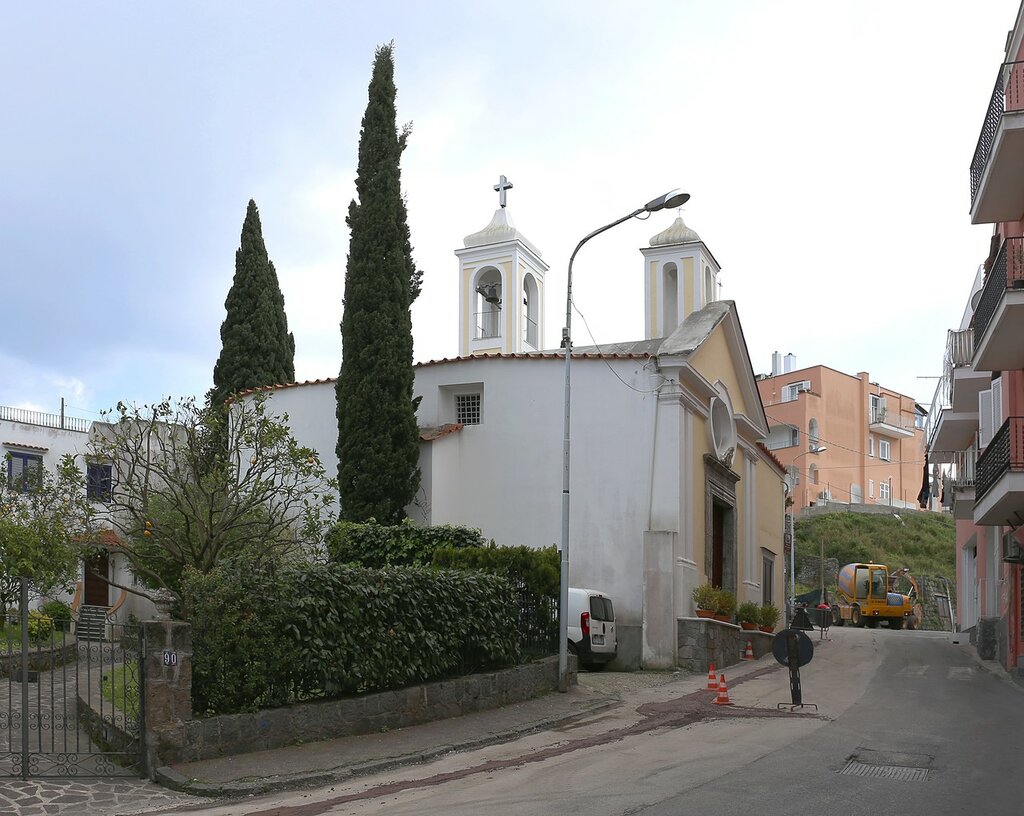