Finishing my walk around the port, I looked into the Church Of St. Mary-the Guardian of the port.. 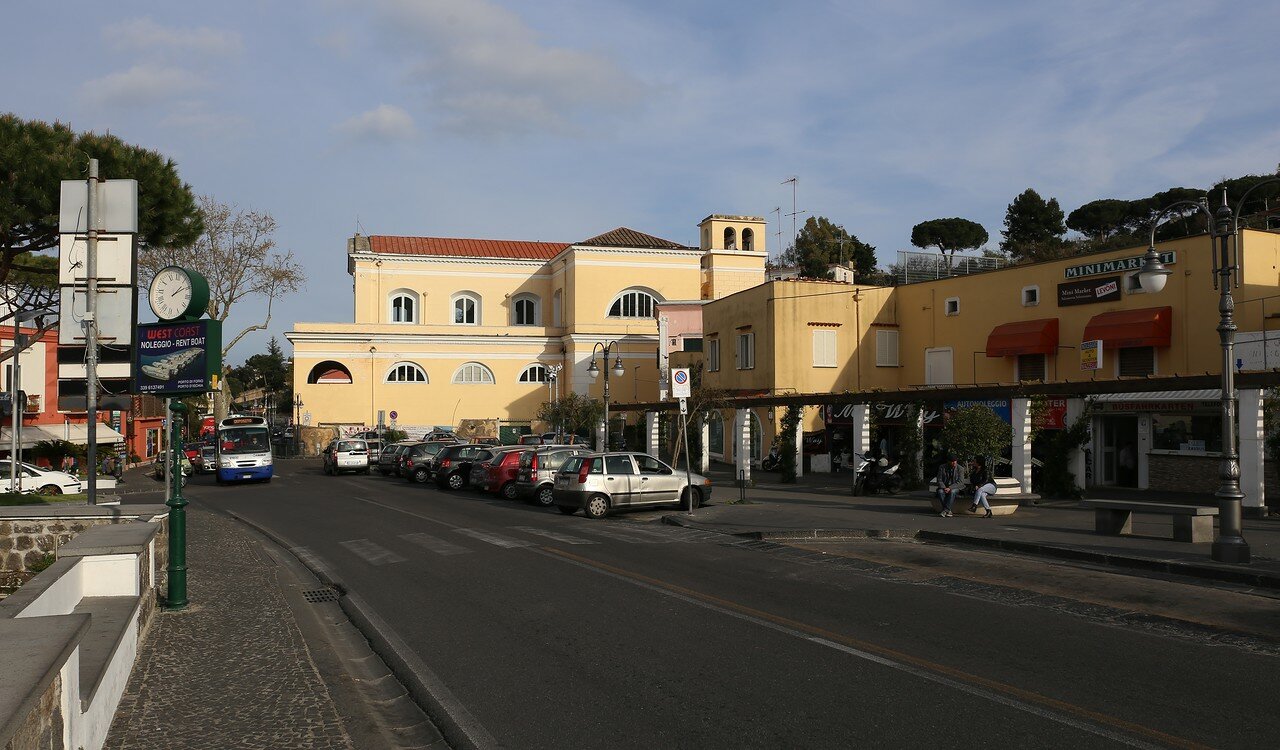 I walked along the fundamental fence and gate of the sanitarium belonging to the Ministry of defense (Stabilimento balneo-termale militare). 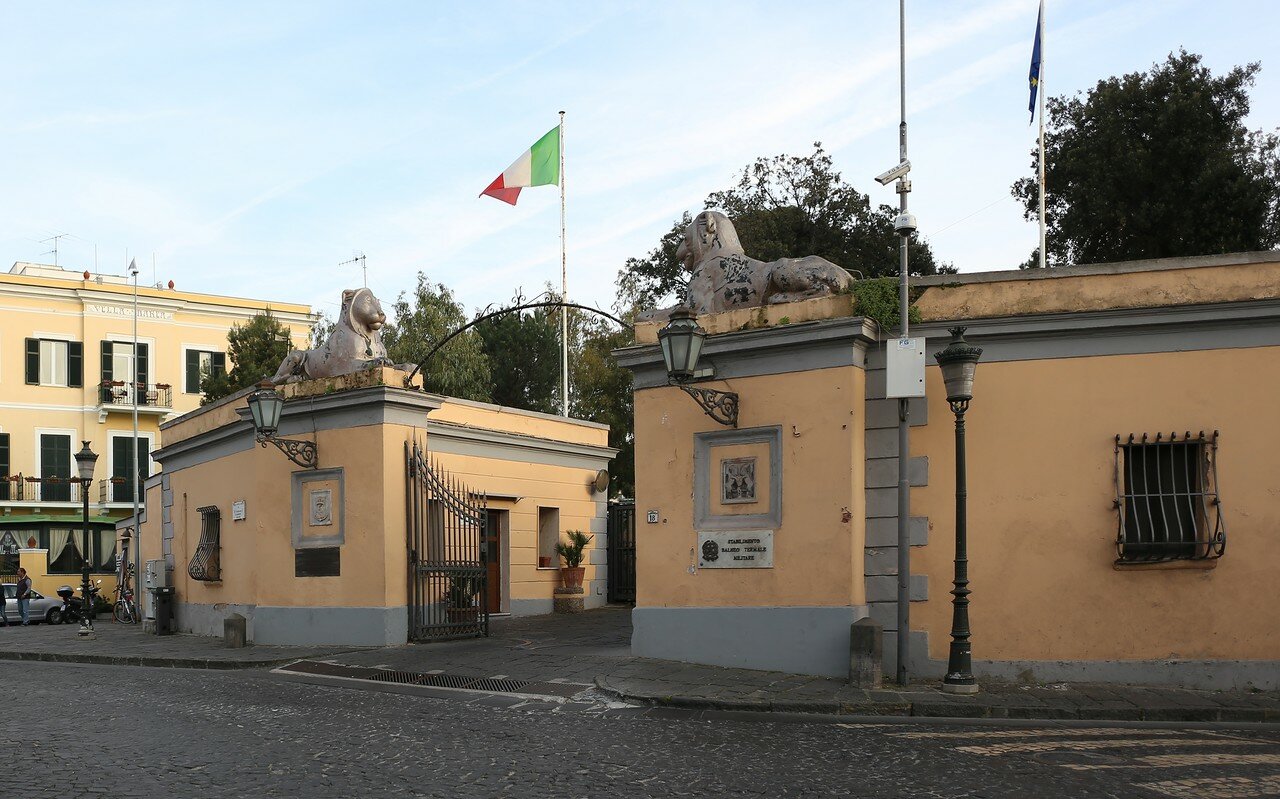 Then he turned onto via Porto, which runs along the right Bank of Porto di Ischia.

This embankment is famous for the best (and expensive) restaurants, the menu of which consists of gifts of the sea. 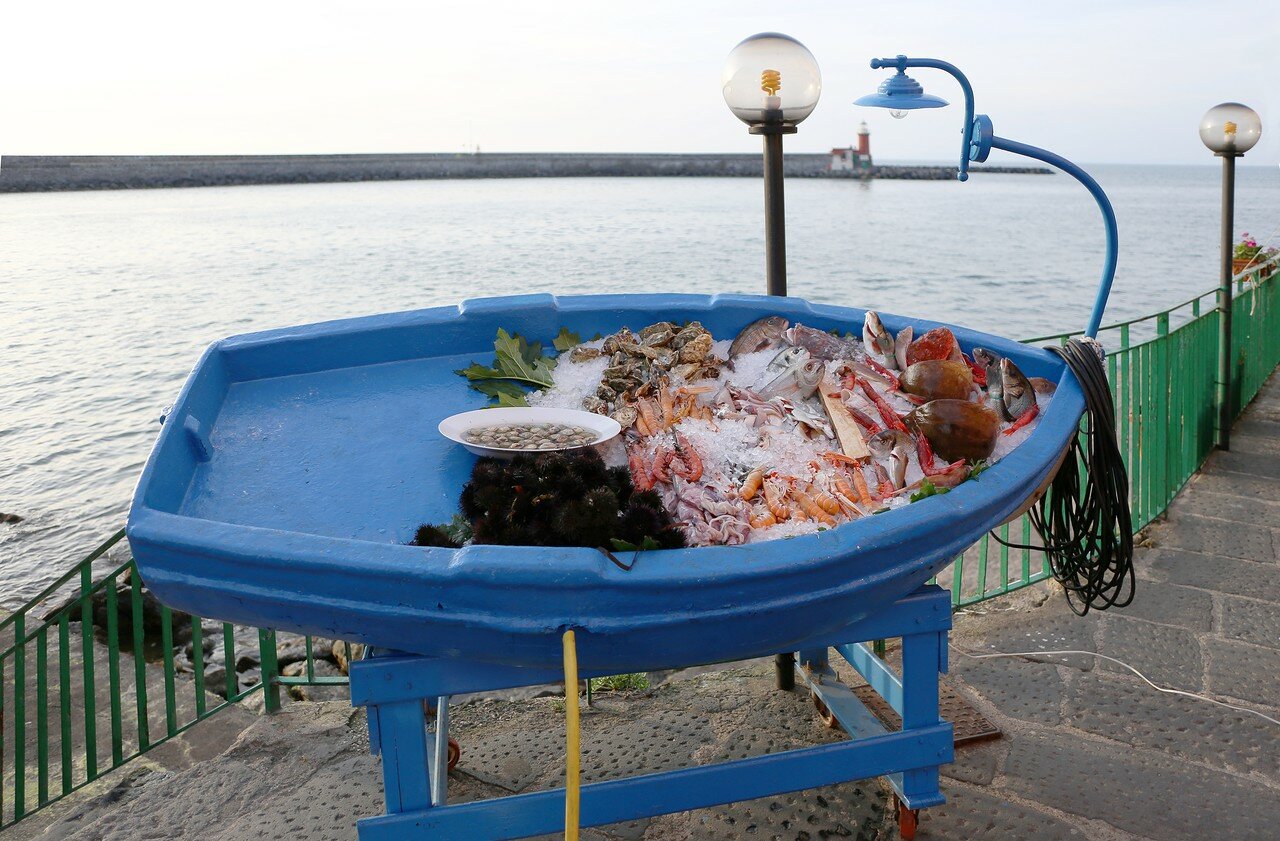 They say that during the season it is full of people, but today the establishments were completely empty, despite the "zamanukha"put on the street. 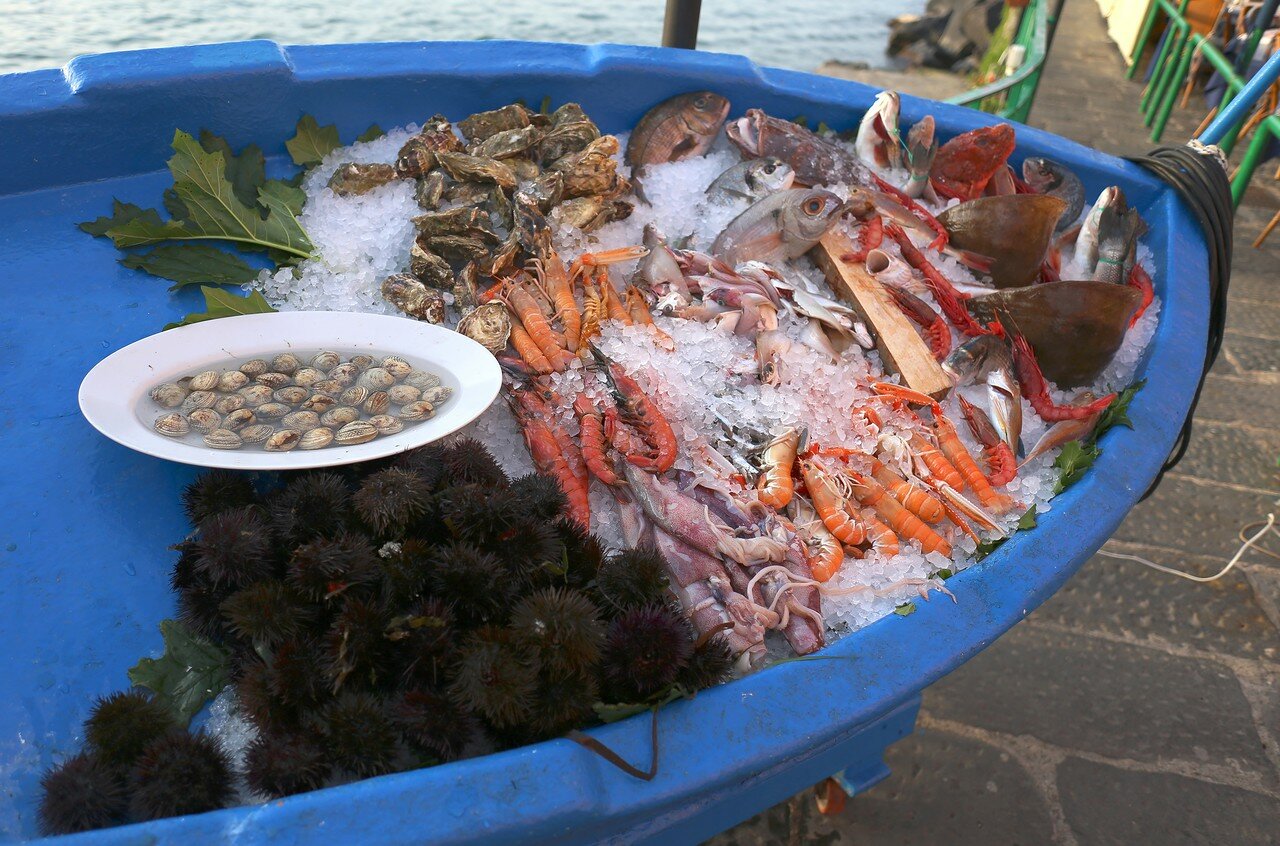 Here you can also visit the famous Perrazzo wine house (Perrazzo Vini d'ischia on the map), whose history goes back to 1880. Winemaking on the island has been engaged in for a long time, but Don Alfonso Perrazzo this business was put on a large scale, and the products of his plant became known far beyond the island. The products of the Perrazzo factory produce elite varieties of wines and liqueurs, taking not the quantity, but the quality, so its products are valued even in regions where they know the Tolok in wine - in Tuscany and Piedmont. Bottles with the image of the Aragonese castle are known in many countries of the world. 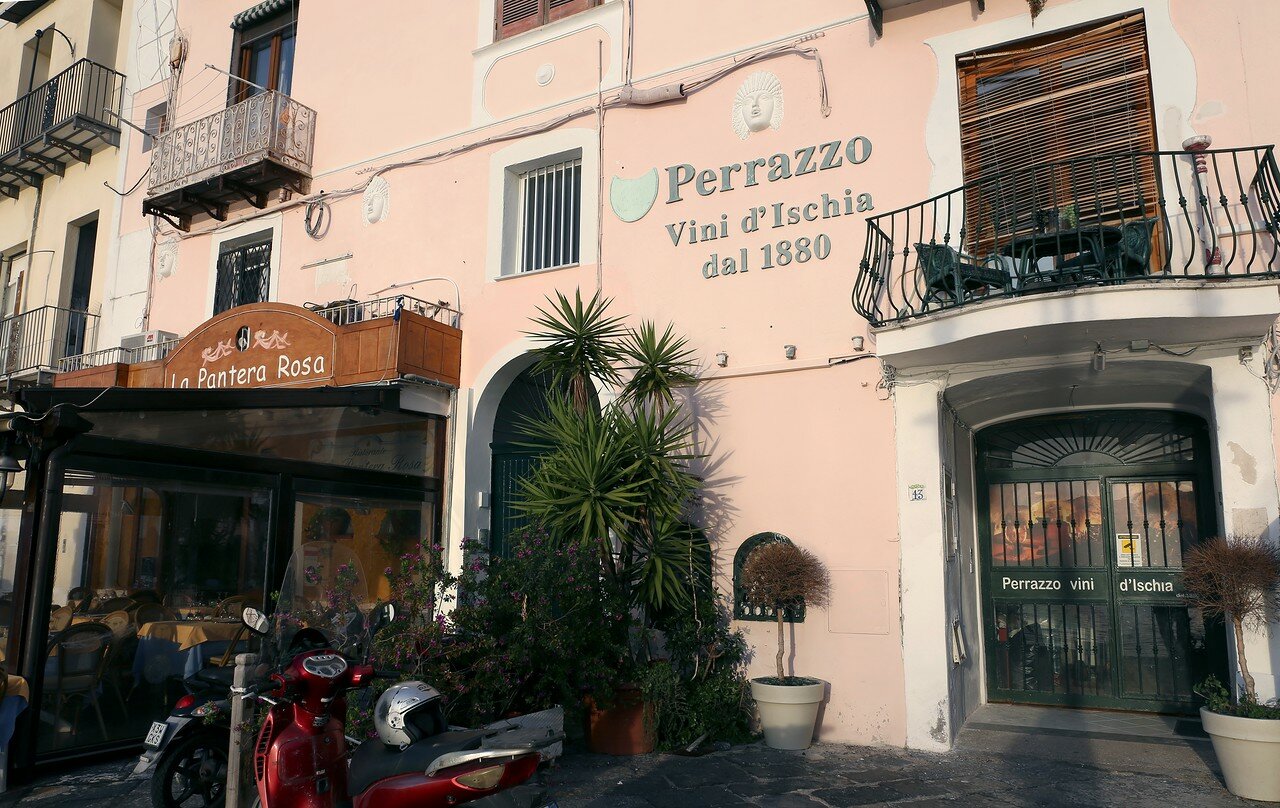 Having rounded the hill of San Pietro, I looked at the beach of the same name (Piaggia di San Pietro). There were more people here than on restaurant street.

Visibility was excellent by sunset, the beach itself was already in shadow, but the entire coast of the Bay of Naples was bathed in the soft rays of the evening sun.

The island of Procida is visible to the right, and beyond it the blue bulk of Vesuvius. From here to Procida 5 kilometers, to the famous volcano - 40. In the upper part of the island, you can see the castle of Terra Murata. 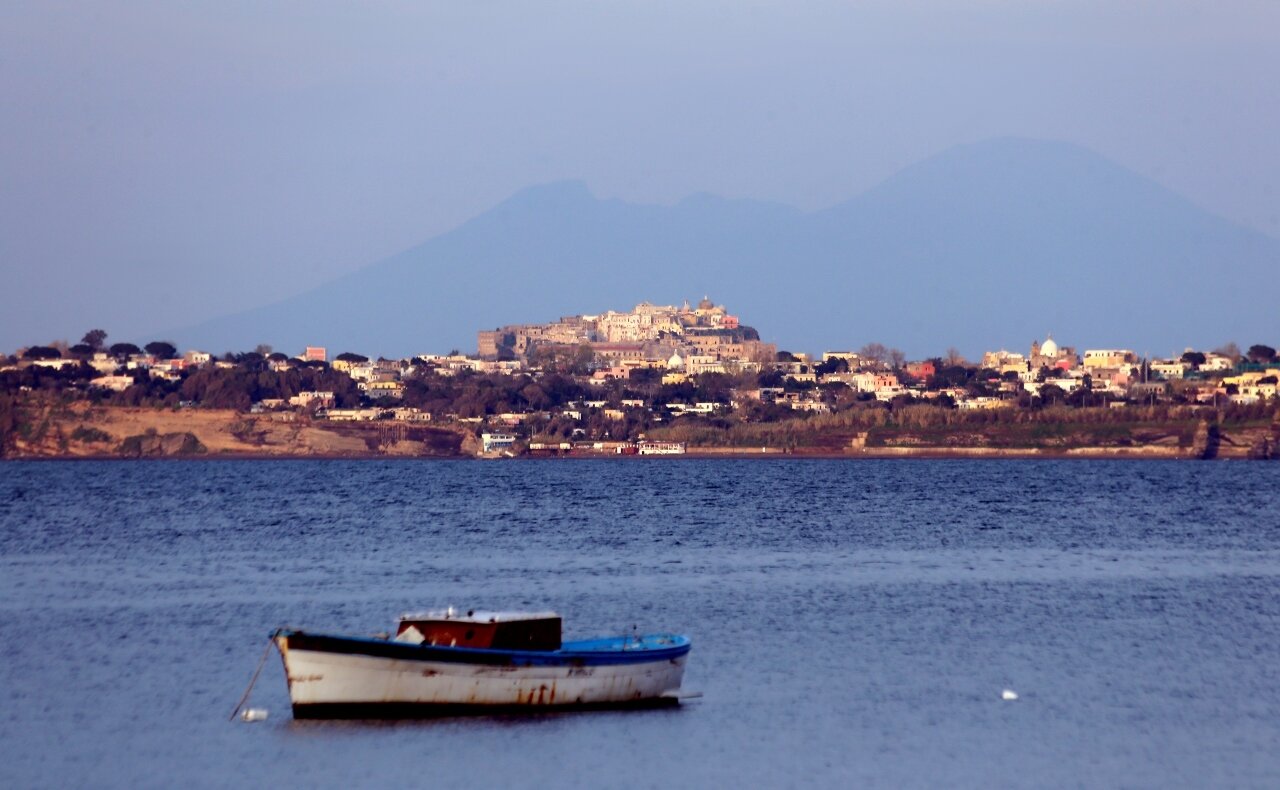 Procida is a small fishing island, little developed by tourists, and completely in vain. 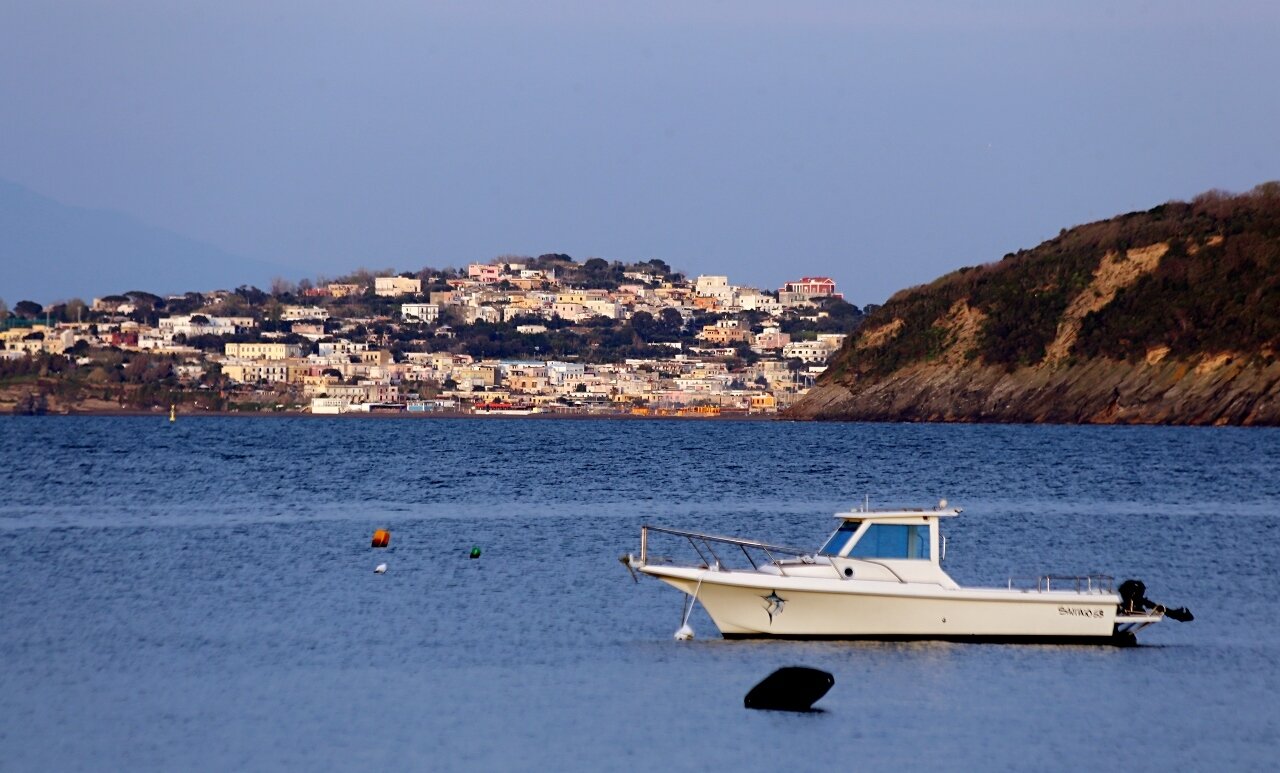 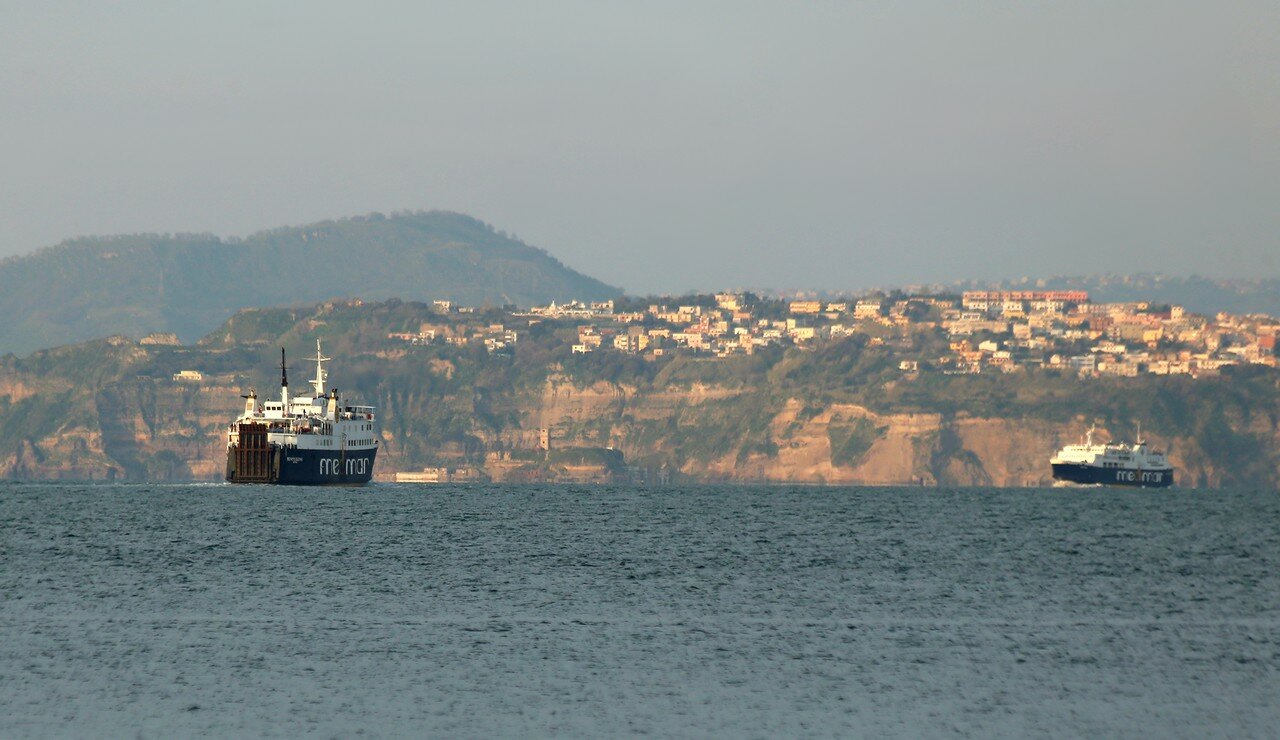 The wide beach of San Pietro stretches for half a kilometer, the width of the strip of sand in the widest place is 75 meters. The beach is protected from the sea by small stone jetties. In summer, the entire strip is lined with umbrellas and deckchairs, and in April you can only find beach volleyball fans here.

Via Roma is the main shopping street of Ischia-Porto. 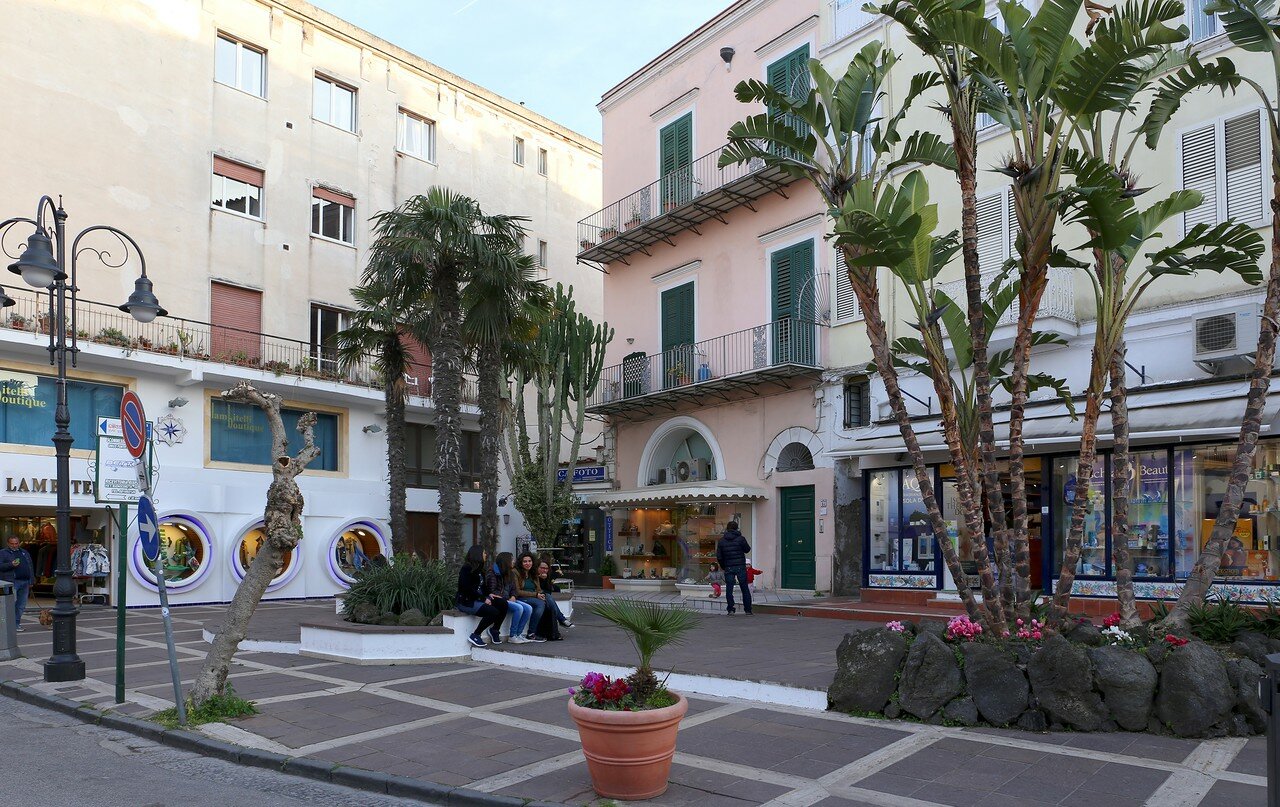 Today is Saturday, the streets are much busier than the previous days. 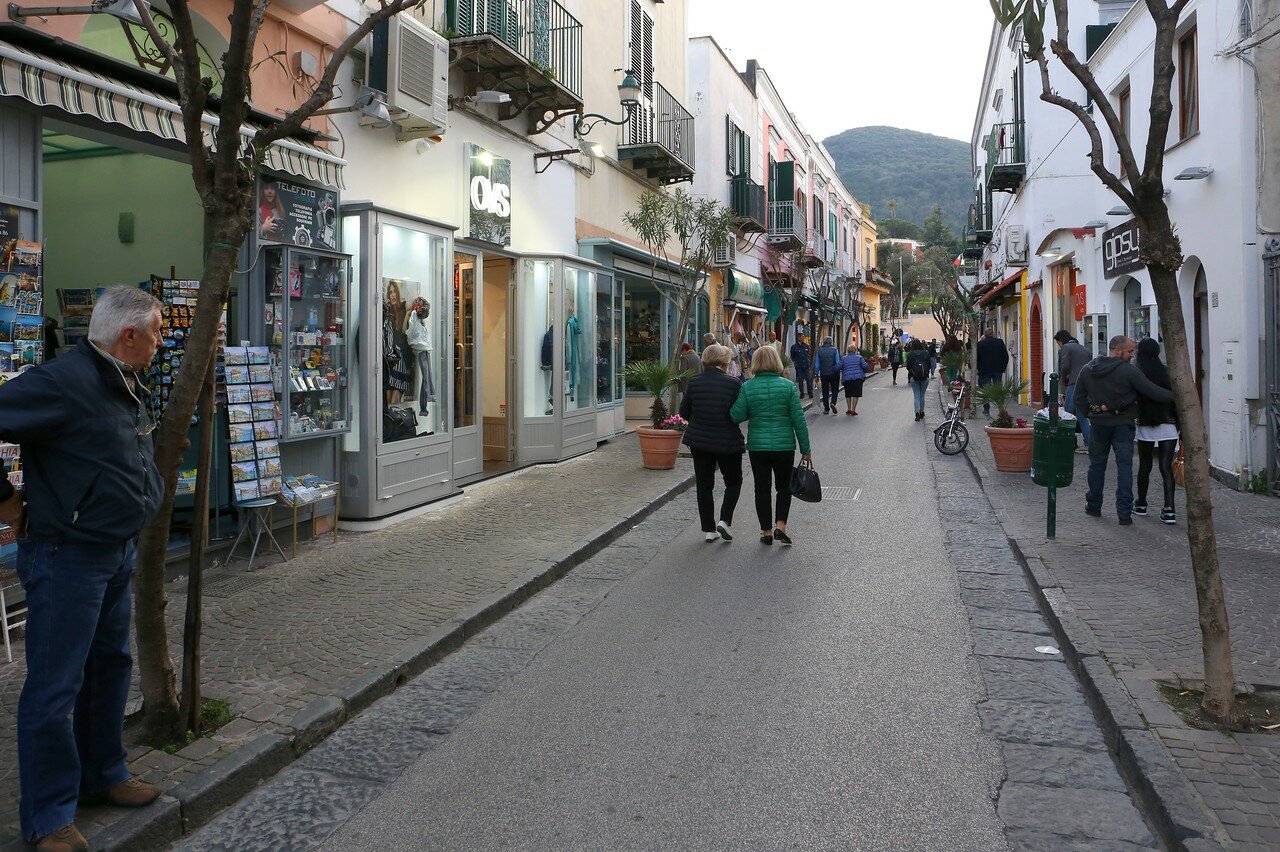 The island is popular not only with "distant" tourists, many Neapolitans spend a weekend here. 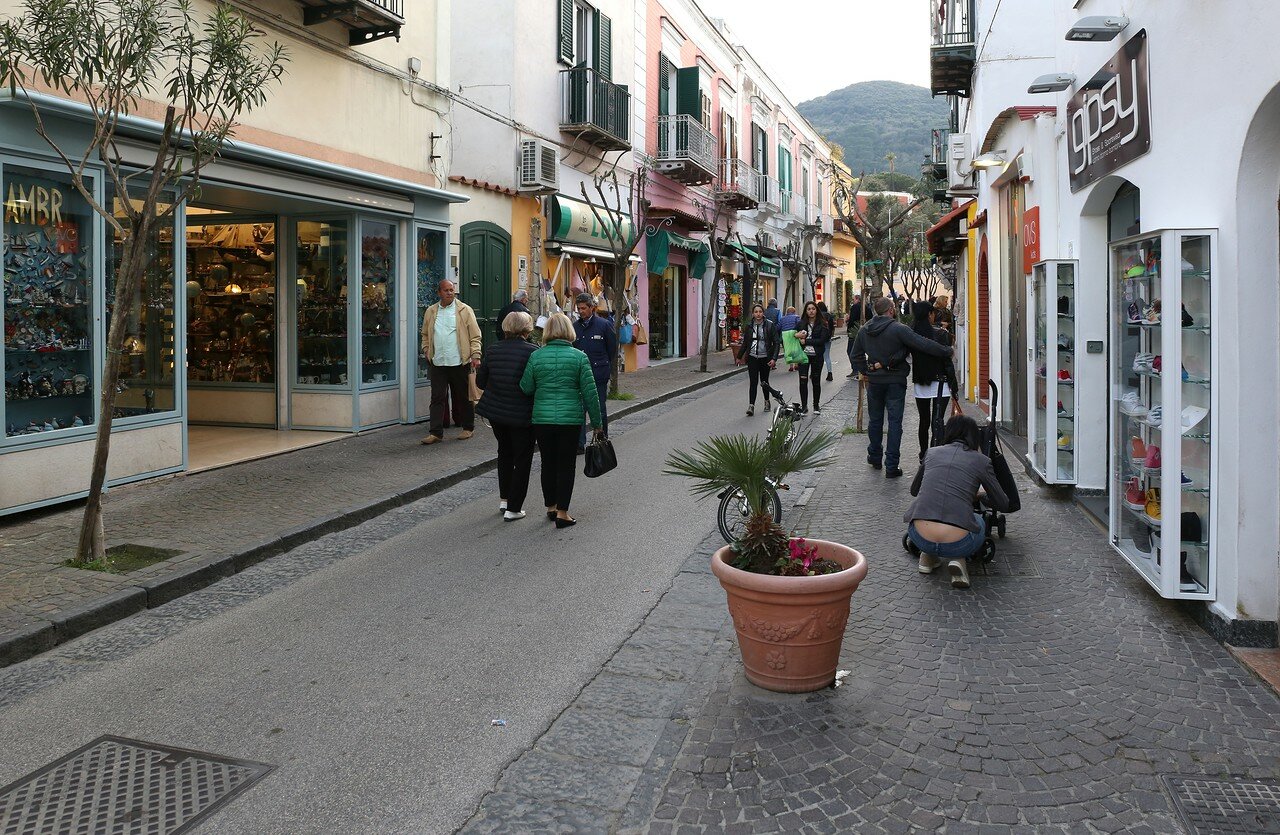 Via Alfredo de Luca is the main bus route. On the right, there is a full-fledged budget supermarket (on the map), which also operates for up to 22 hours. This is quite unusual for the island - here food stores are open from 8 to 12, and in the evening from 17 to 19. In addition, it is not easy to find them, they are practically absent in the" hotel " quarters. 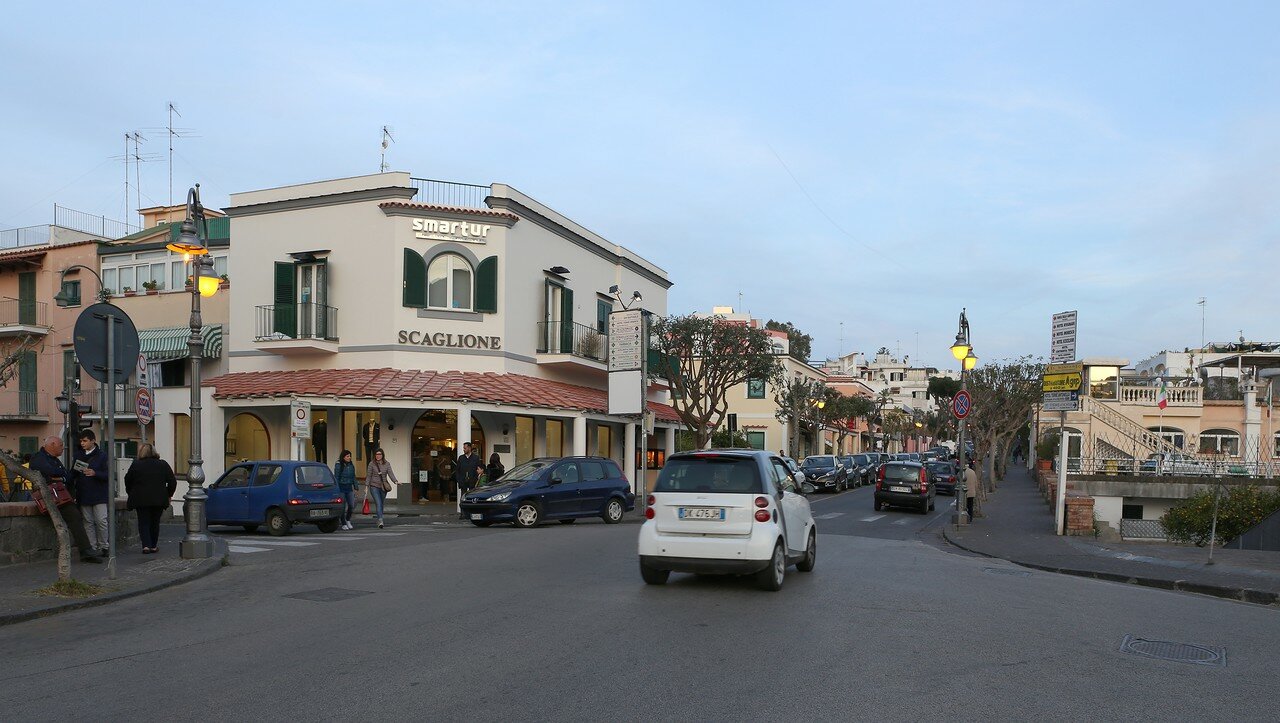 Via delle Terme, hotel Oriente. Although 3 stars, but quite pretentious. 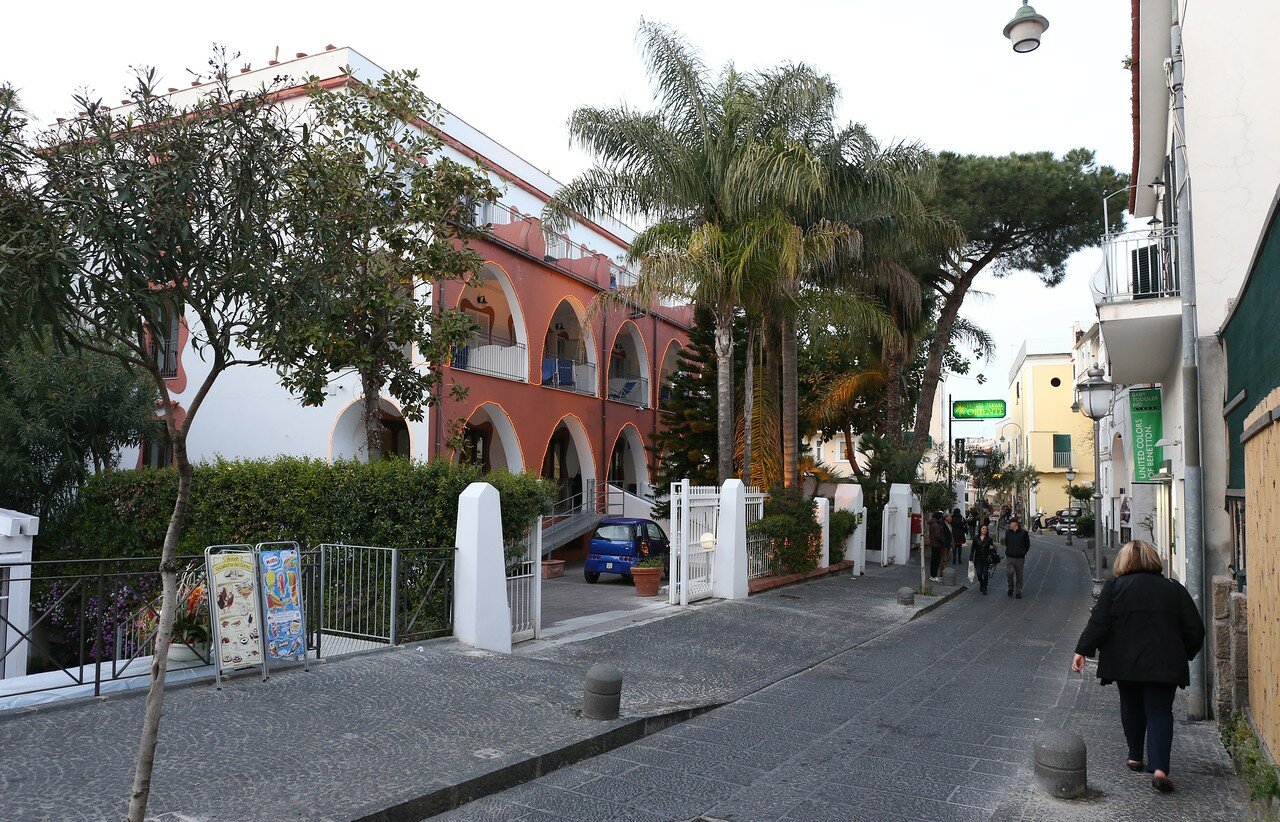 A simple and beautiful solution - in the evening, traffic in the center is blocked by such mobile flower beds. 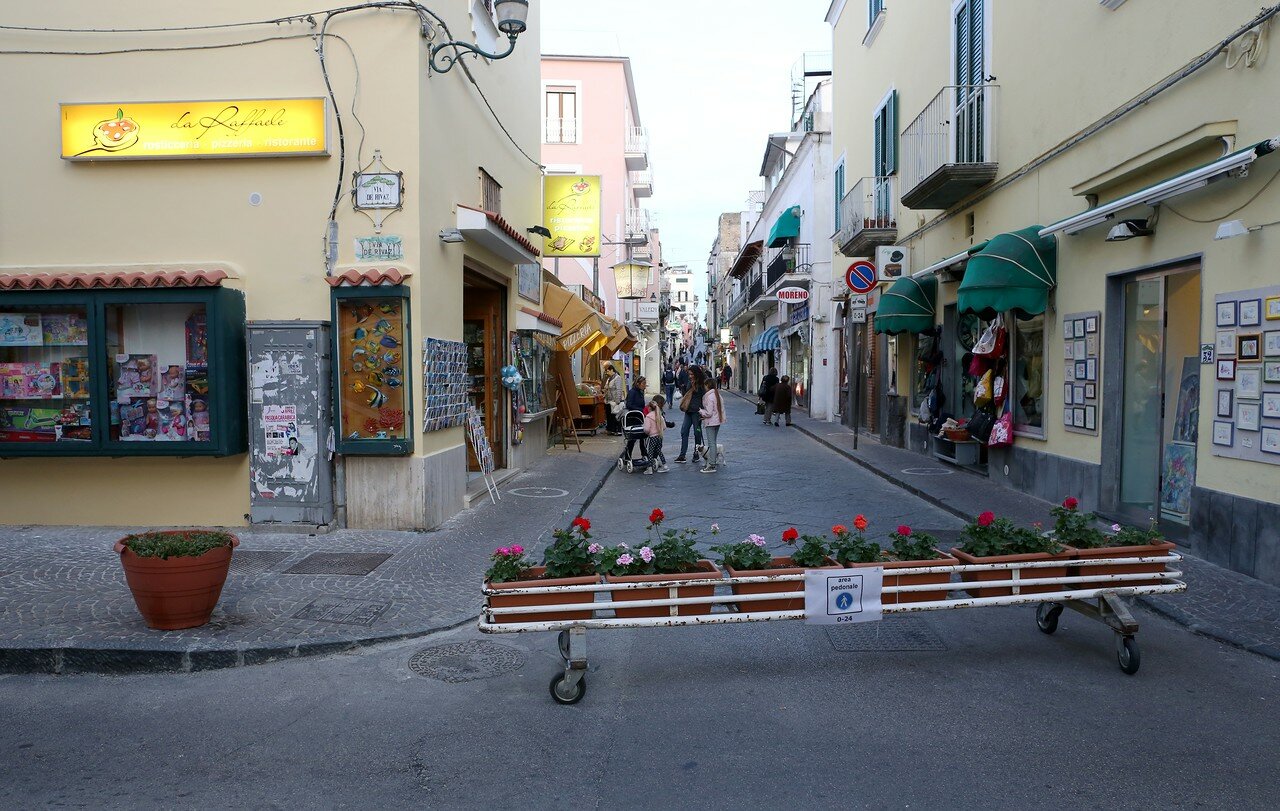 Let's go back to via Roma. 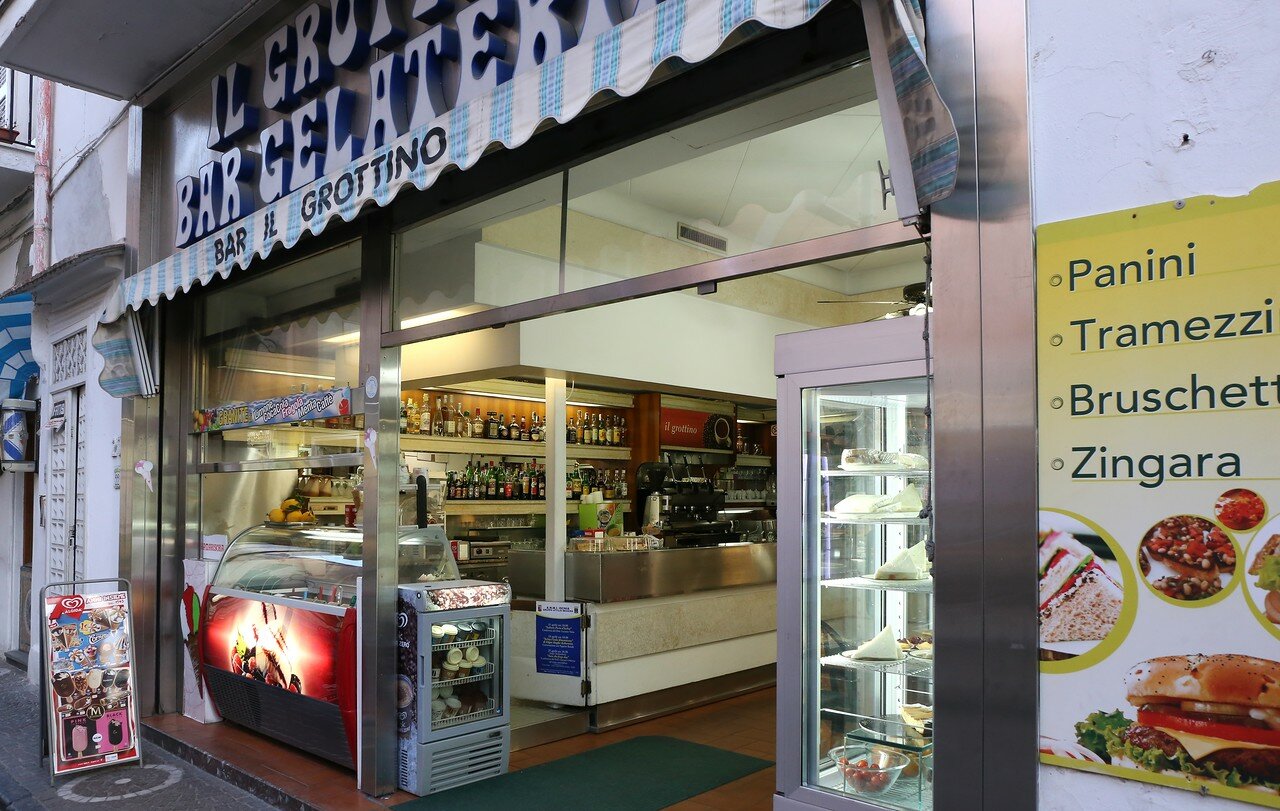 Here, as on the embankment, the restaurants are empty. Maybe later in the night and they will have visitors - a lot of young people have come to the island for the weekend. During the week, even late at night, I did not see more than one customer in them, although the places Shine lights until late at night. 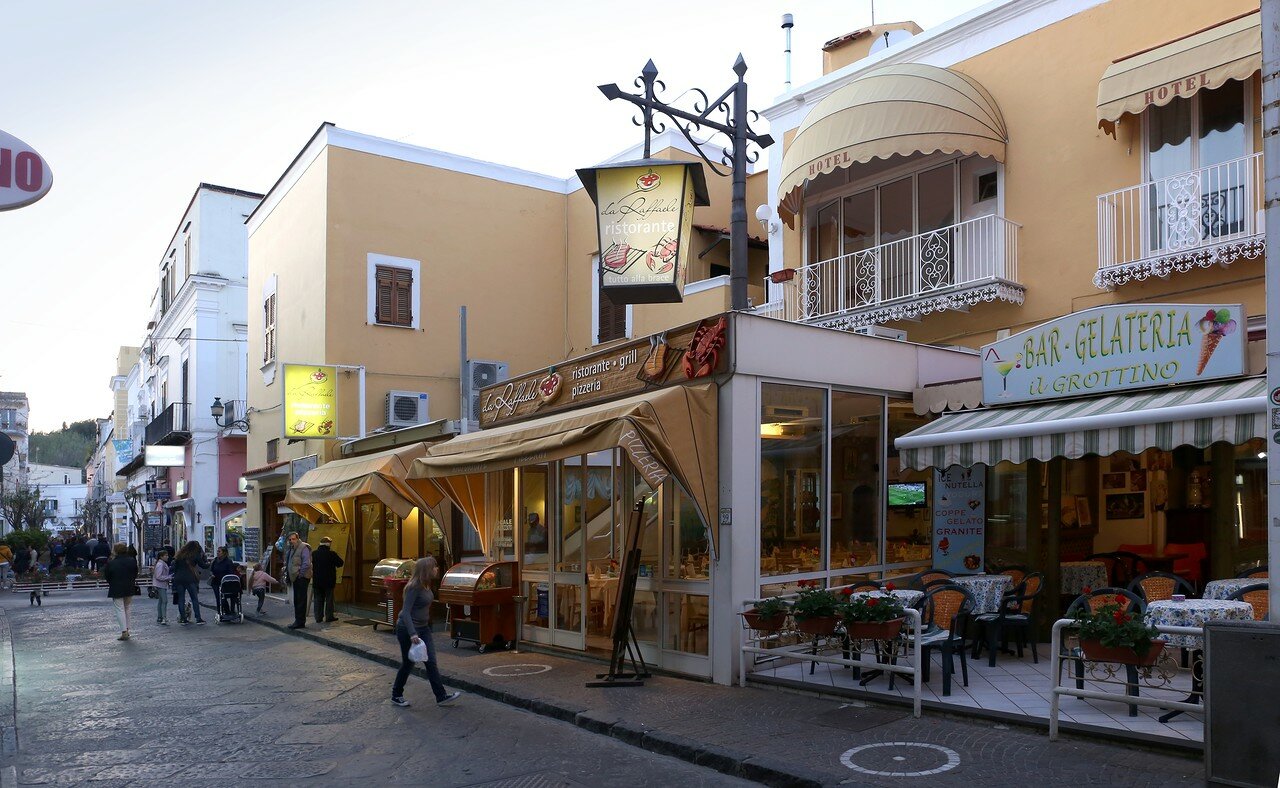 Church Of San Pietro. Although my hotel is 50 meters away, and I passed near it several times a day, I never managed to get acquainted with its interiors. 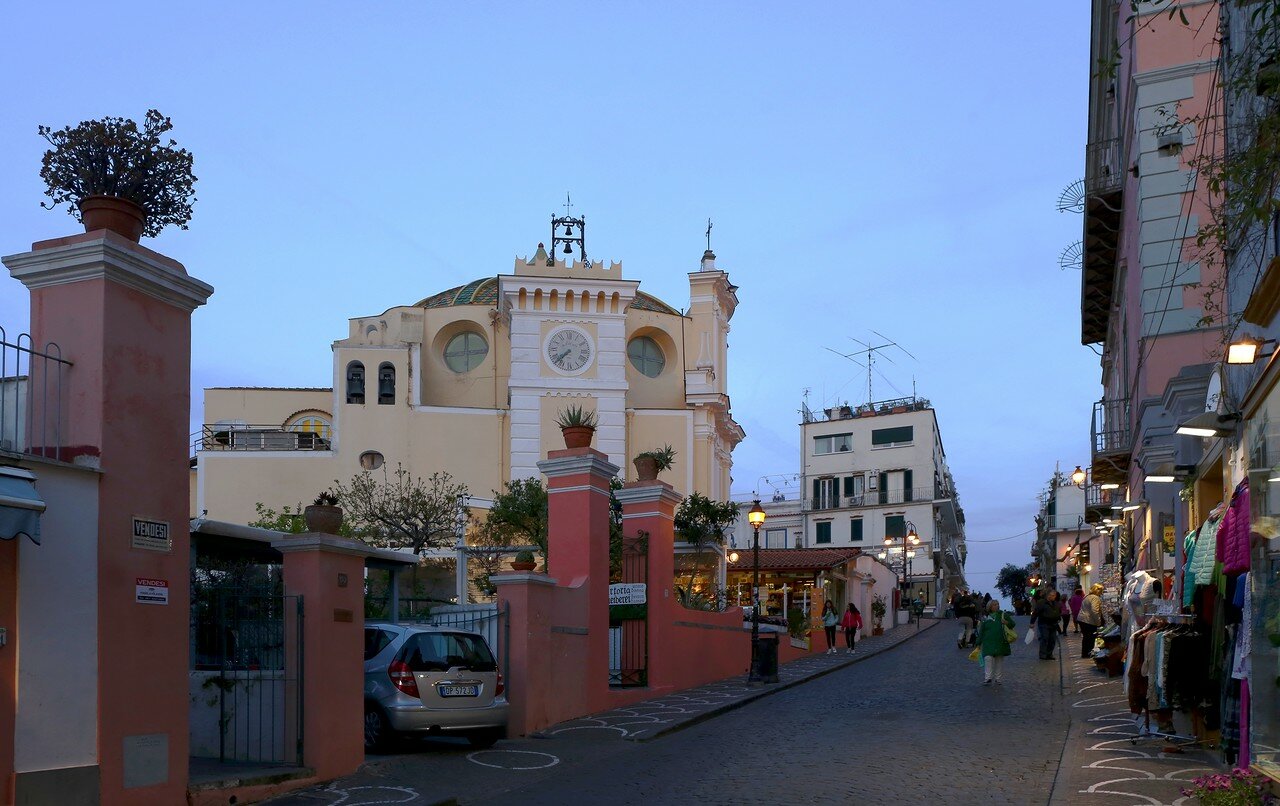 Now the Church was open for Saturday mass, but it was impossible to enter - it looked as if the entire population of Ischia Porto had gathered in the small Church. 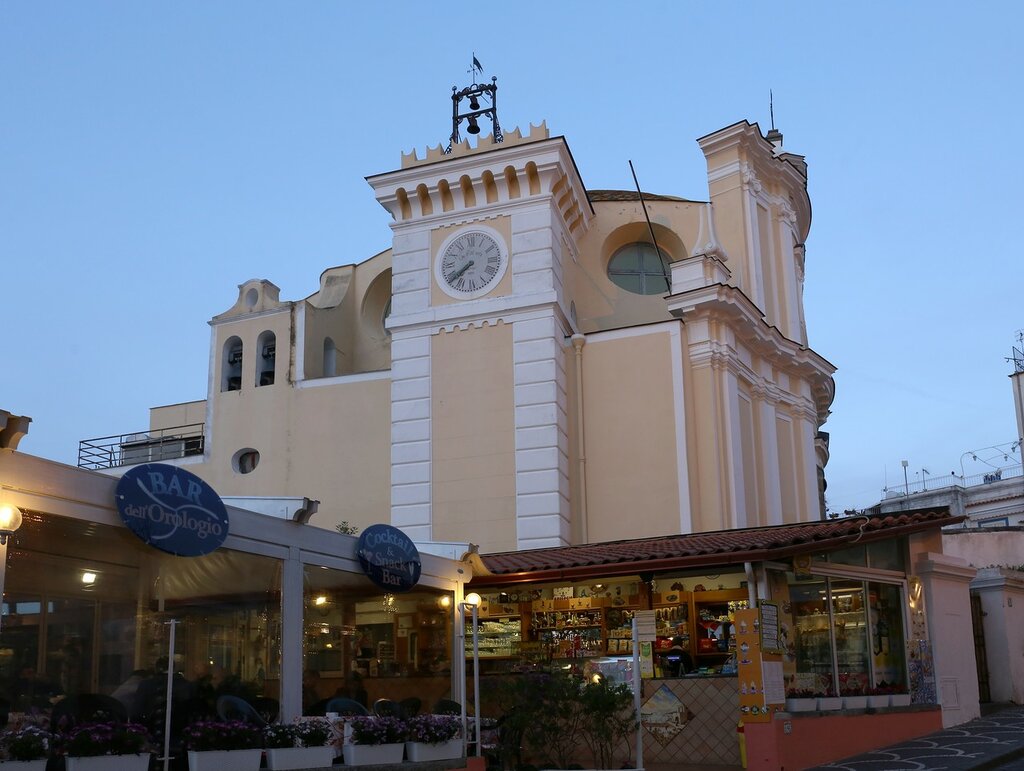