After Ischia Ponte I had planned a visit to the tower of Guevara (Michelangelo). Although in a straight line until it was 300 meters, the Navigator drew a pretty intricate track length of over a kilometer. The route began Via San Giovan Giuseppe della Croce. The street is named in honor of a native of the island, the monk, the colleague of Peter of Alcantara, reformed order of Franciscans. 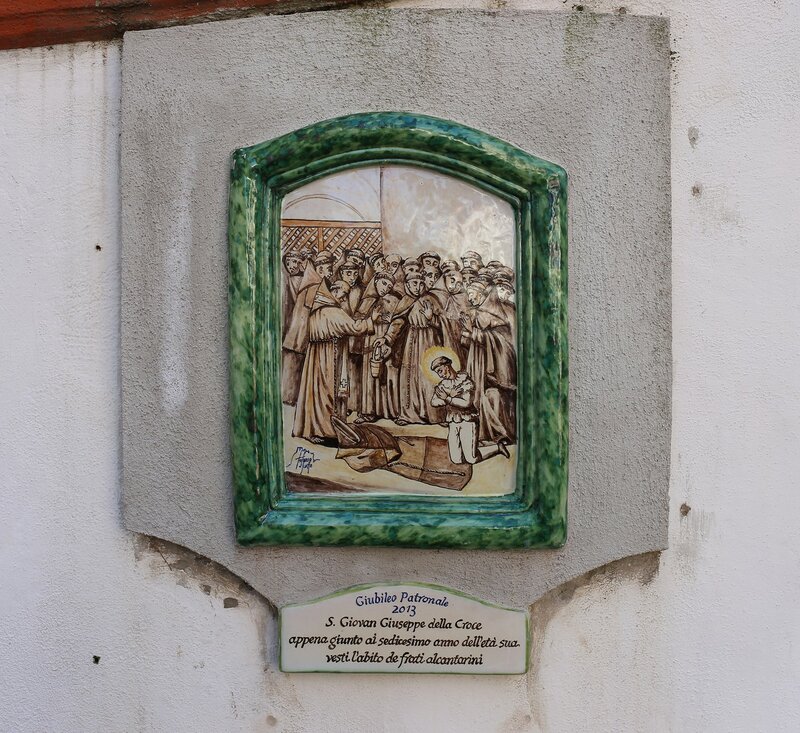 Then narrow preblock Vico Montagna, hiding behind the houses above the left side of the street. 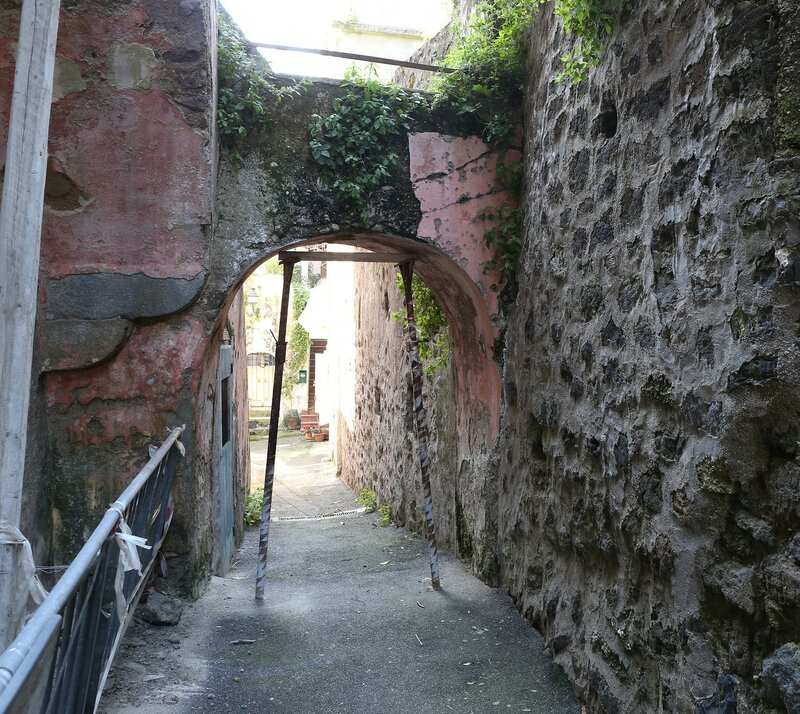 At the end of the lane showed up here like this cheerful courtyard. 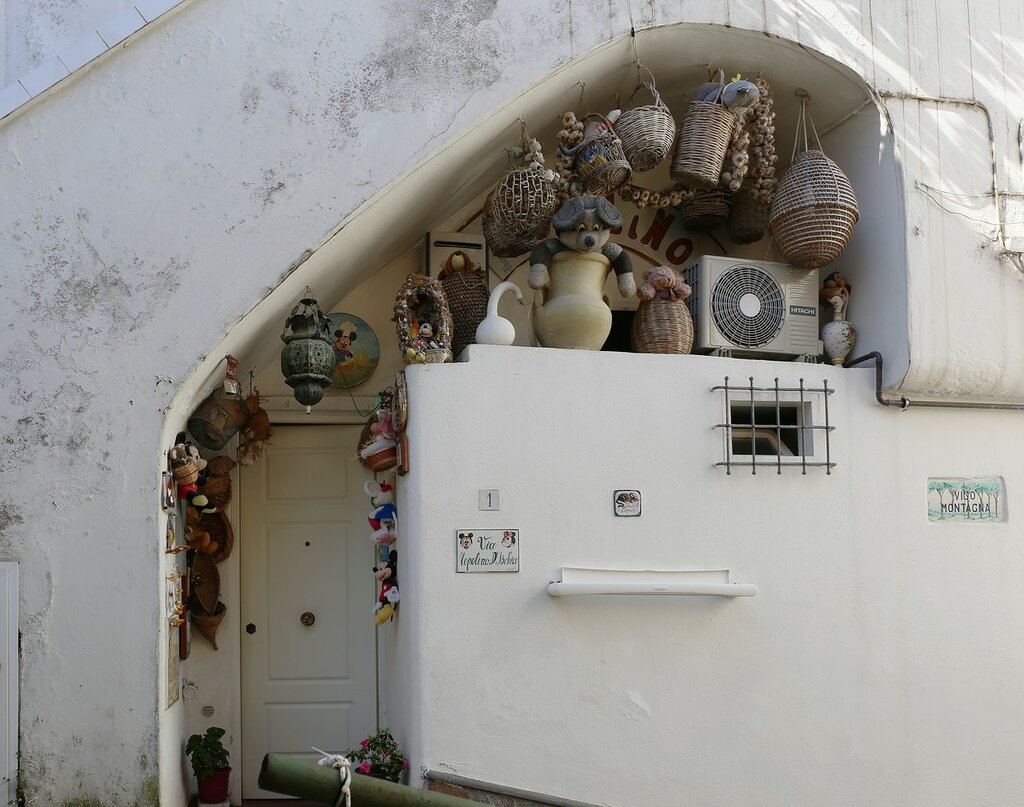 And another one. Interestingly, this decor I have not seen anywhere else on the island, only in this small alleyway. 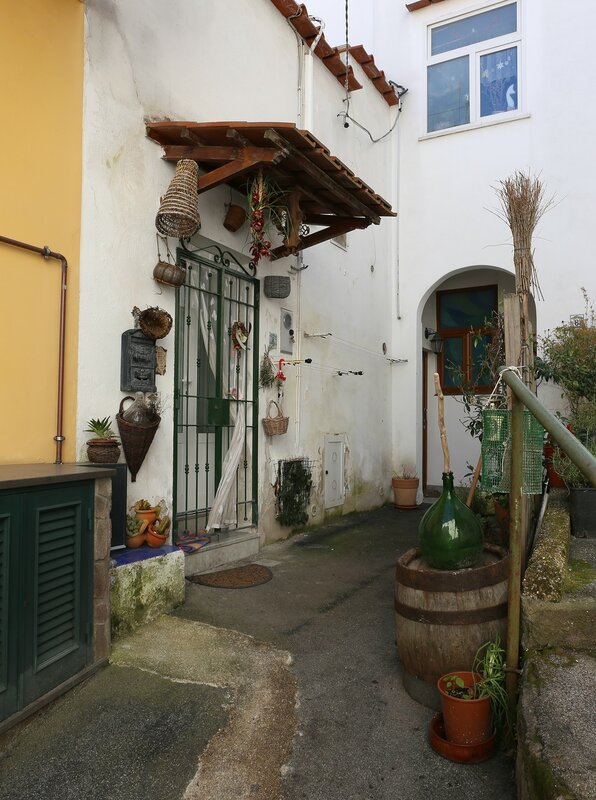 Then the path went up among the deaf stone walls. Notice that in this remote part of the wall and even the steps carefully plastered and sometimes veneered. 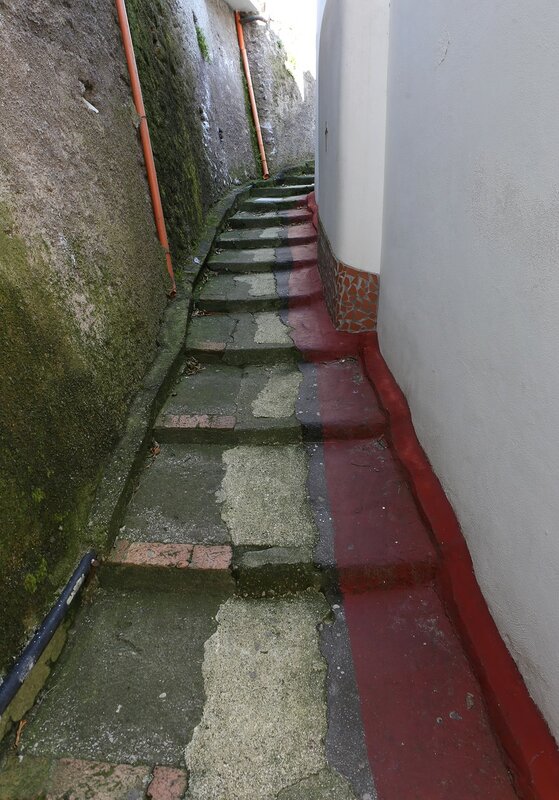 This part of Ischia Porto the most ancient, it was here that the first settlement house outside the Aragonese castle. 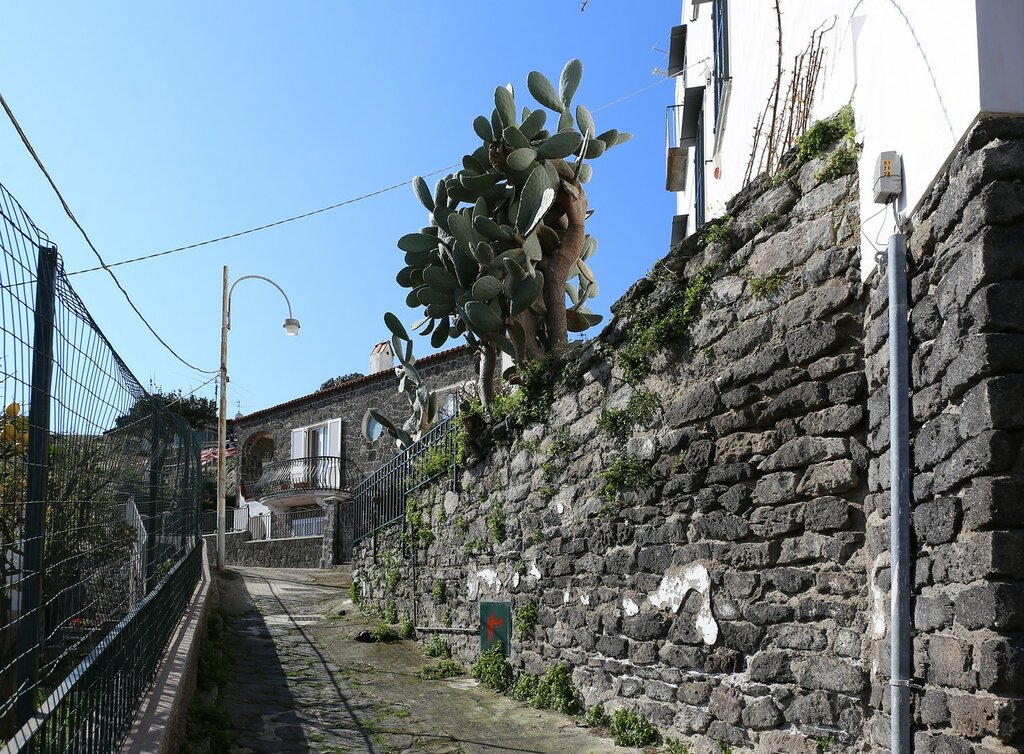 After a steep turn lane went in the opposite direction, after receiving the name Via Soronzano. 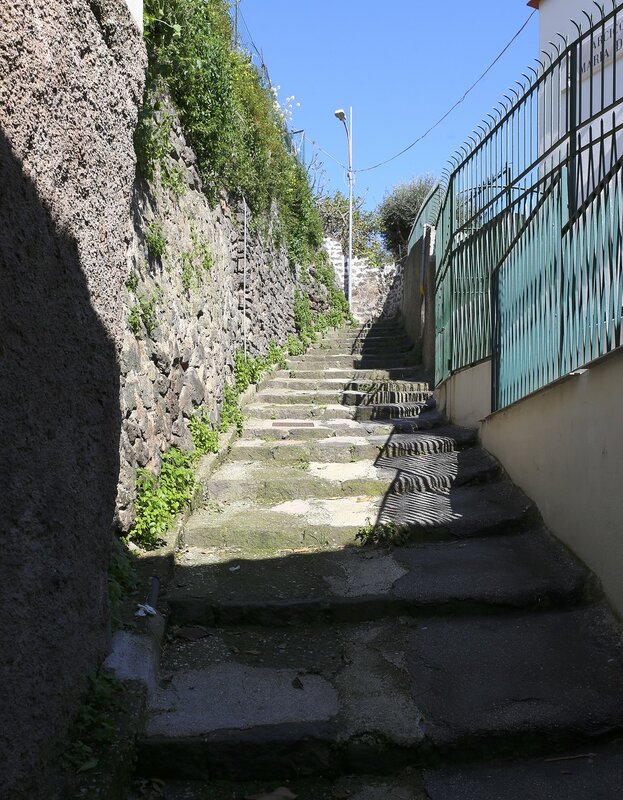 Here the wall of the recess thoroughly fortified stone walls. 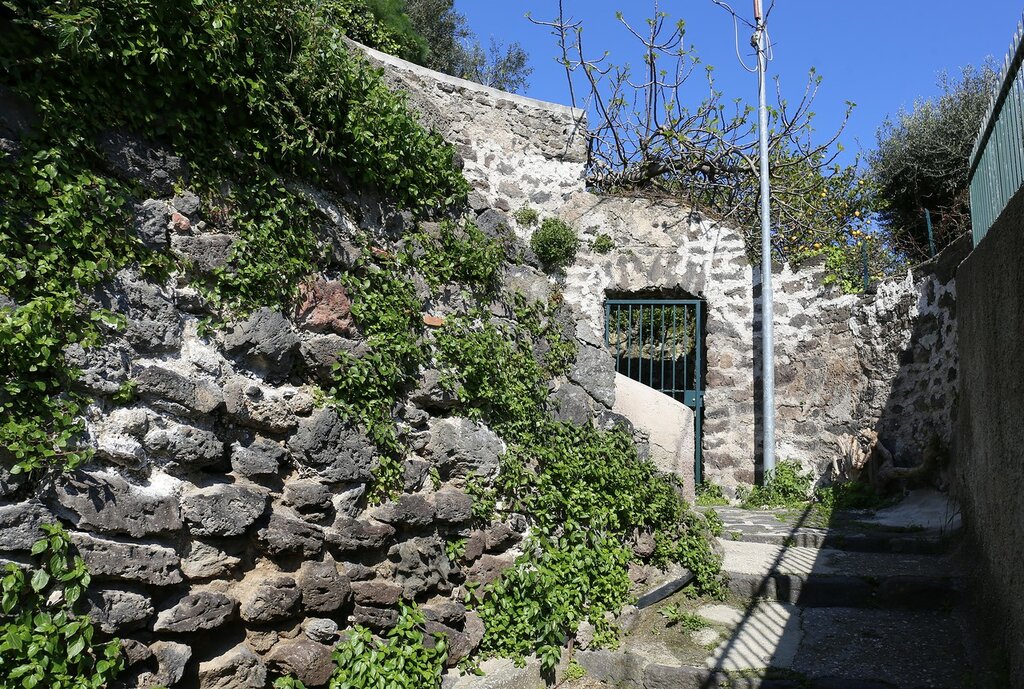 After a hundred meters on the left opened a view of the Bay and the domes of the churches of the district of San Antonio. 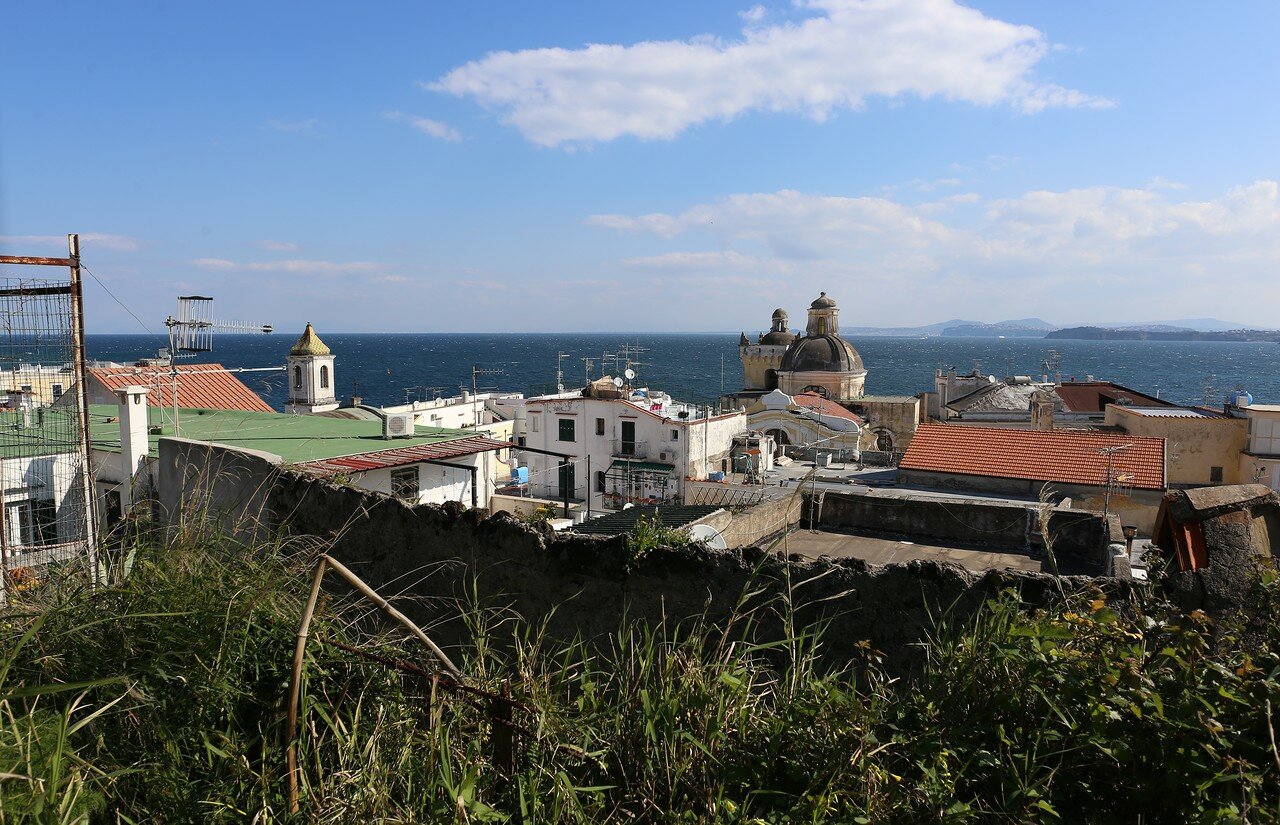 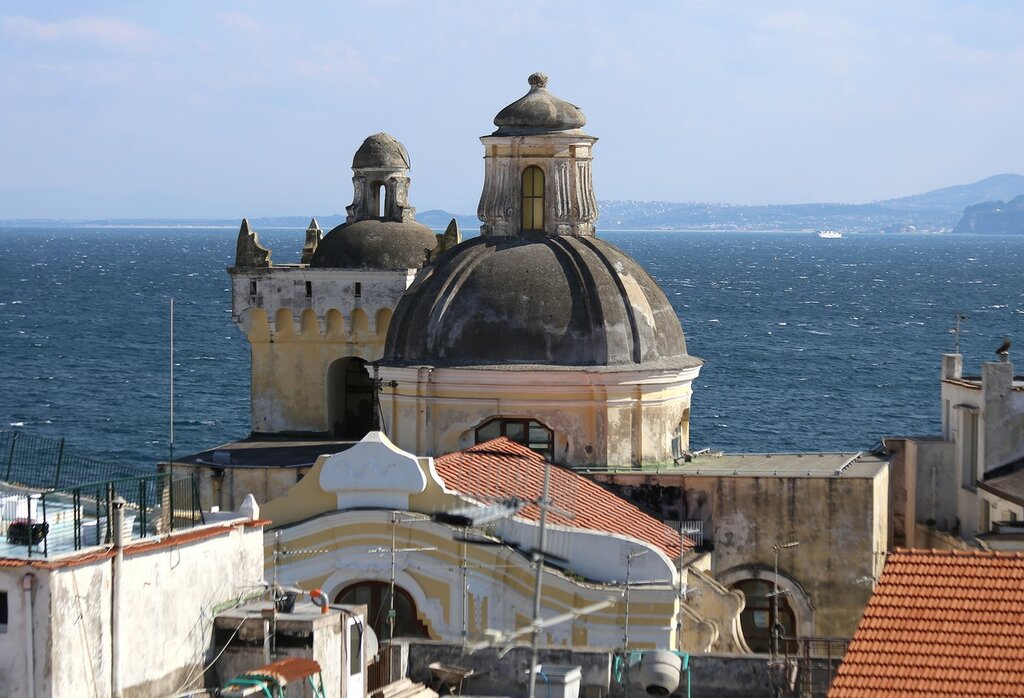 And the bell tower of the Church of the Holy spirit, covered with bright glazed tiles. 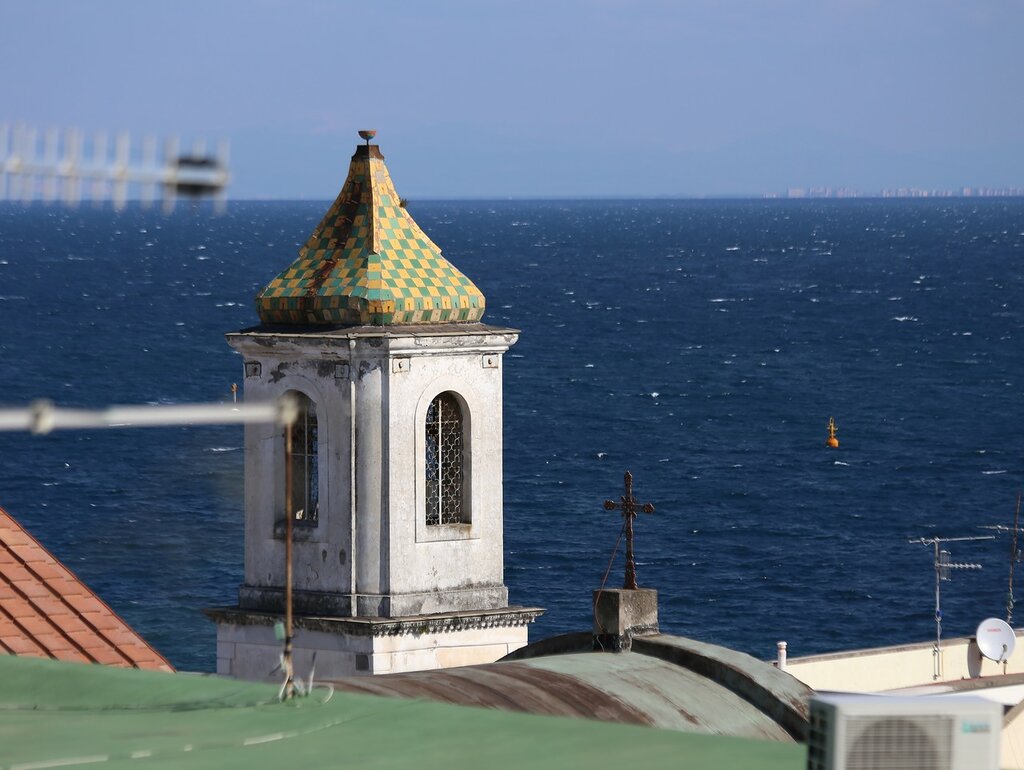 When he reached the end of the street, see black Sands of Fisherman's beach (Spiaggia dei Pescatori) and the Cape Molino (Molino Punta). 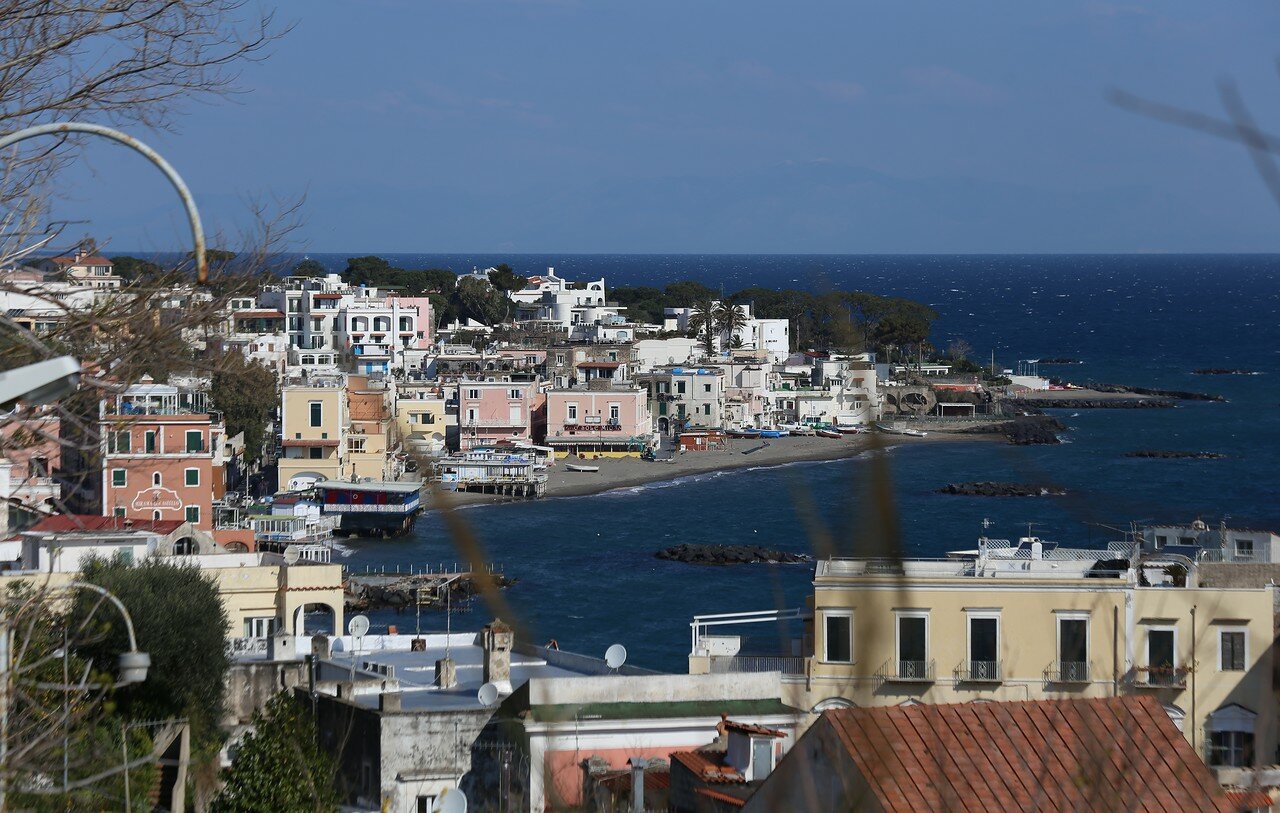 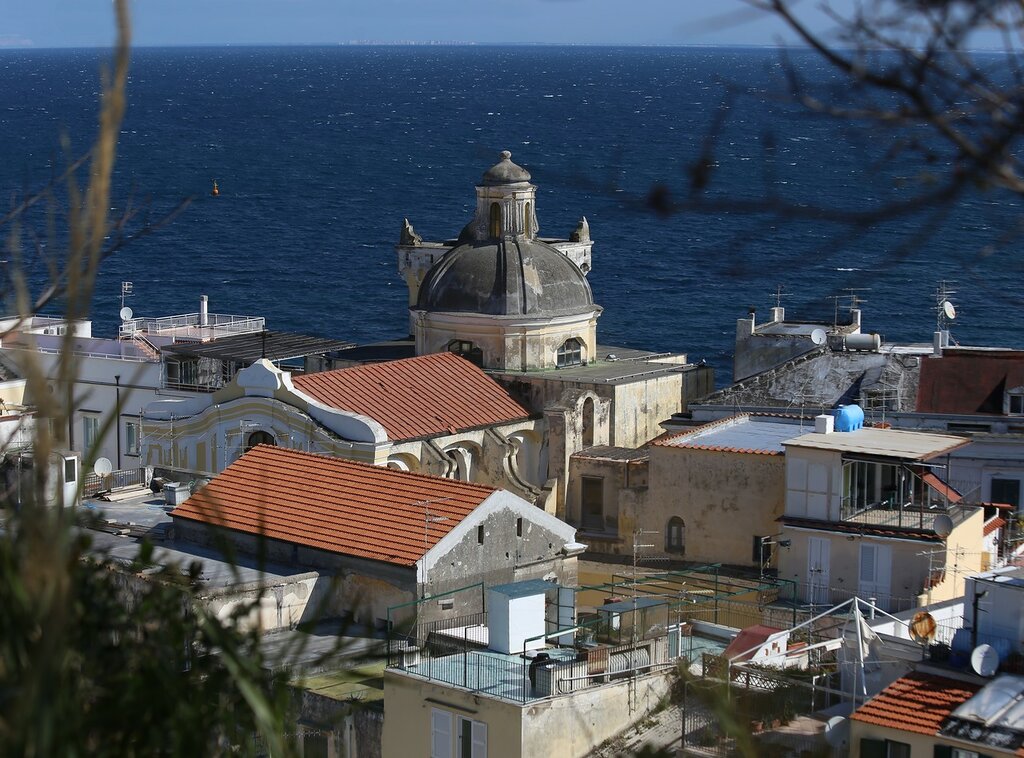 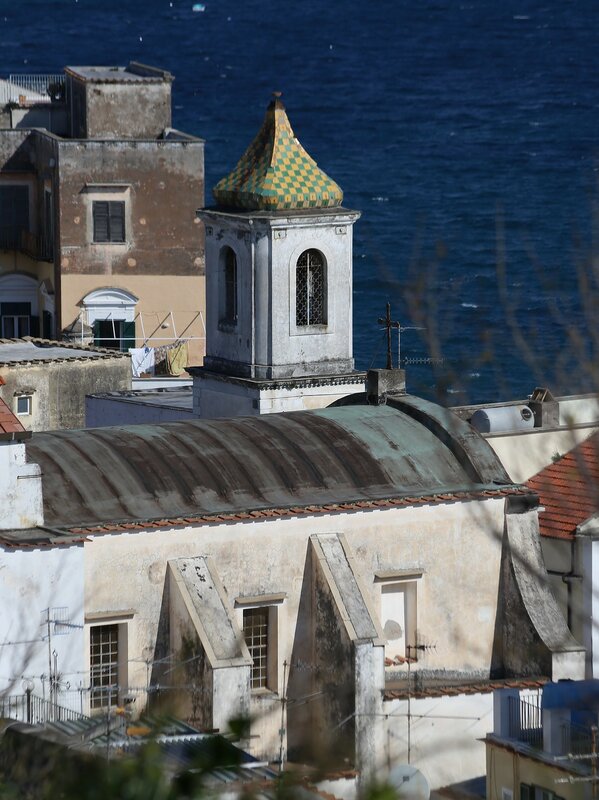 Looking at the Bay, see Phlegraean coast of the Peninsula and the island of Procida. 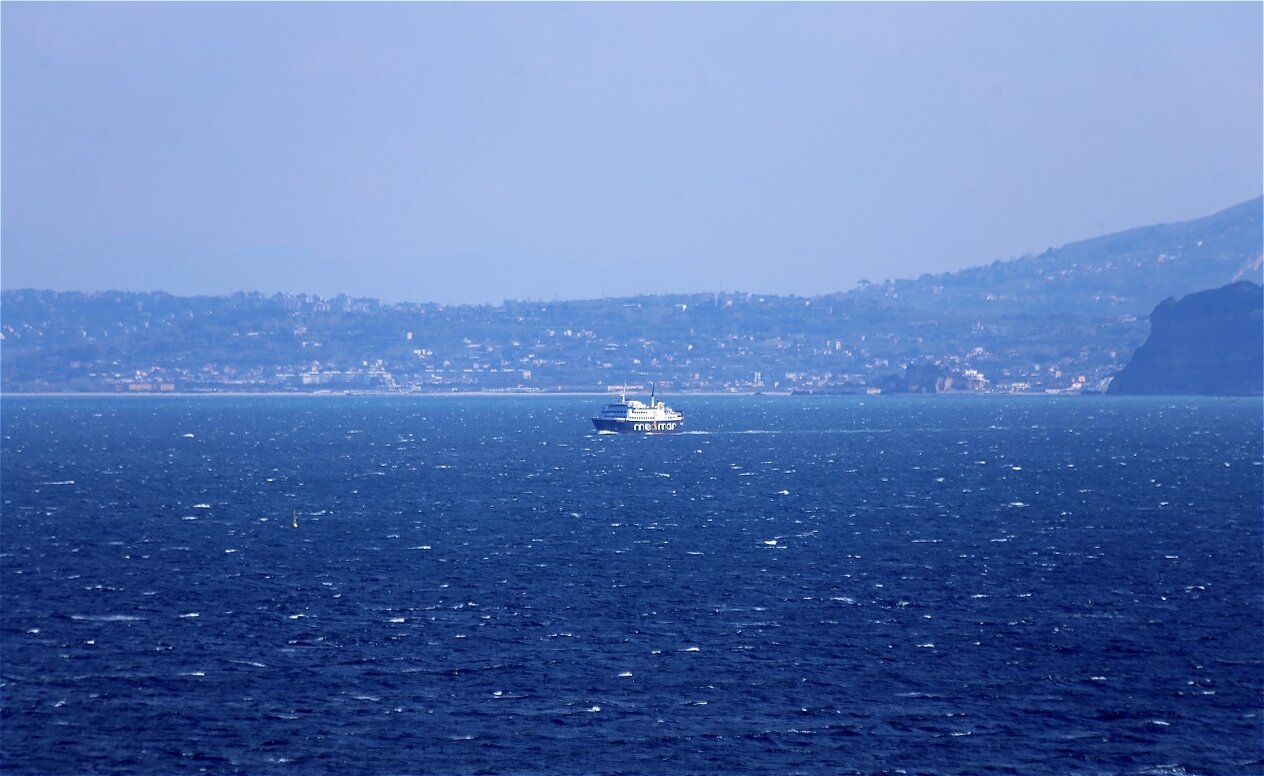 Go ahead, all for the same Via Soroncano, turning to the right. On the map this area is designated as Cimitero Vecchio (old cemetery), but instead of graves on the sides of the track lush blooming lilacs. 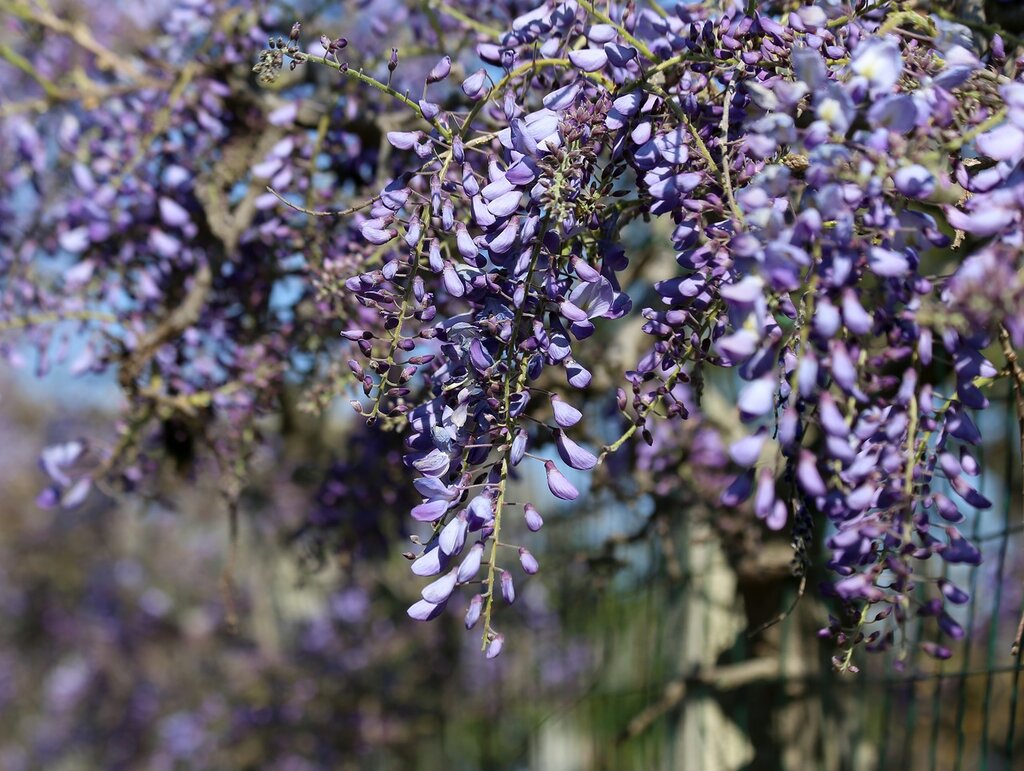 Reaching wide Via Nuova Cartaromana, I came to the finish line - to the tower, there was nothing left, and the road went downhill. To the left you could contemplate orange and lemon gardens, which looked out Aragonese castle. 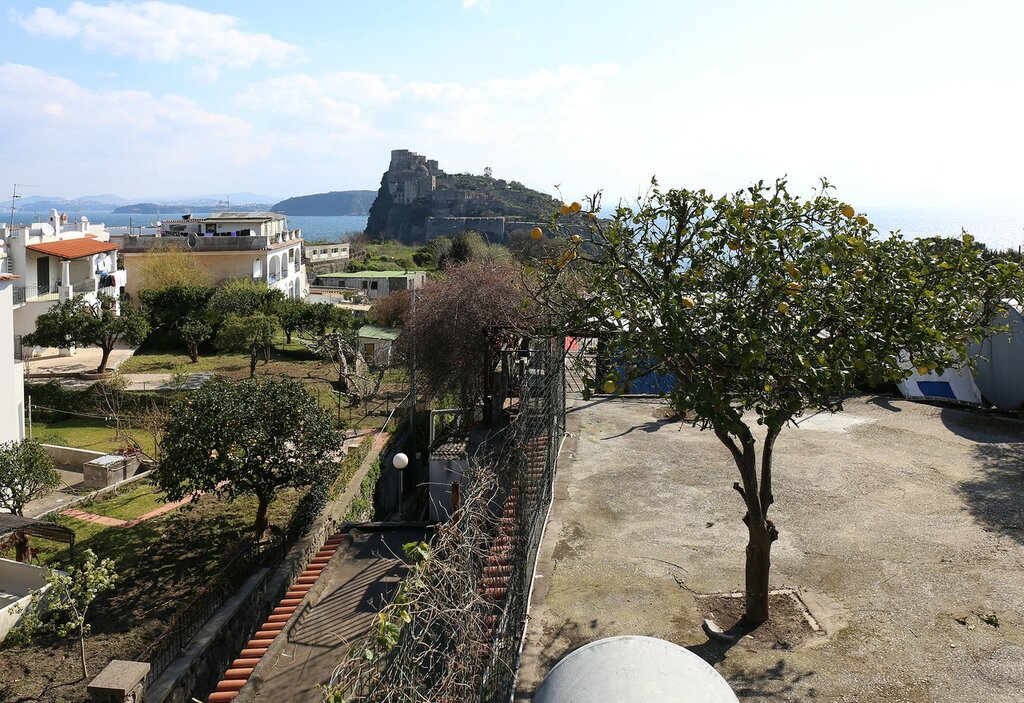