Off the coast of Ischia

Our ferry skirting Procida from the open sea, so the waves here are much more than in the Gulf of Naples. 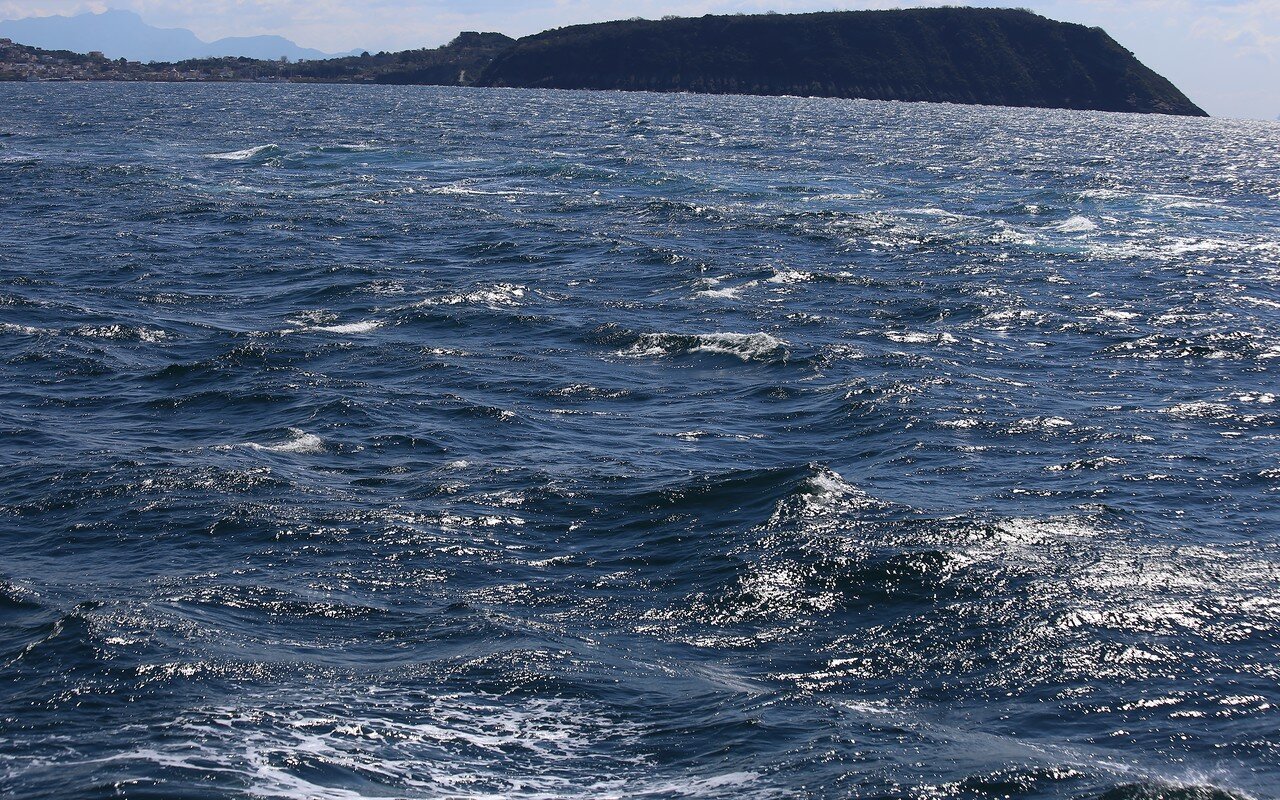 If our big ship shakes so that you have to grab hold of the horrible, you can imagine that is done on such a small boat. 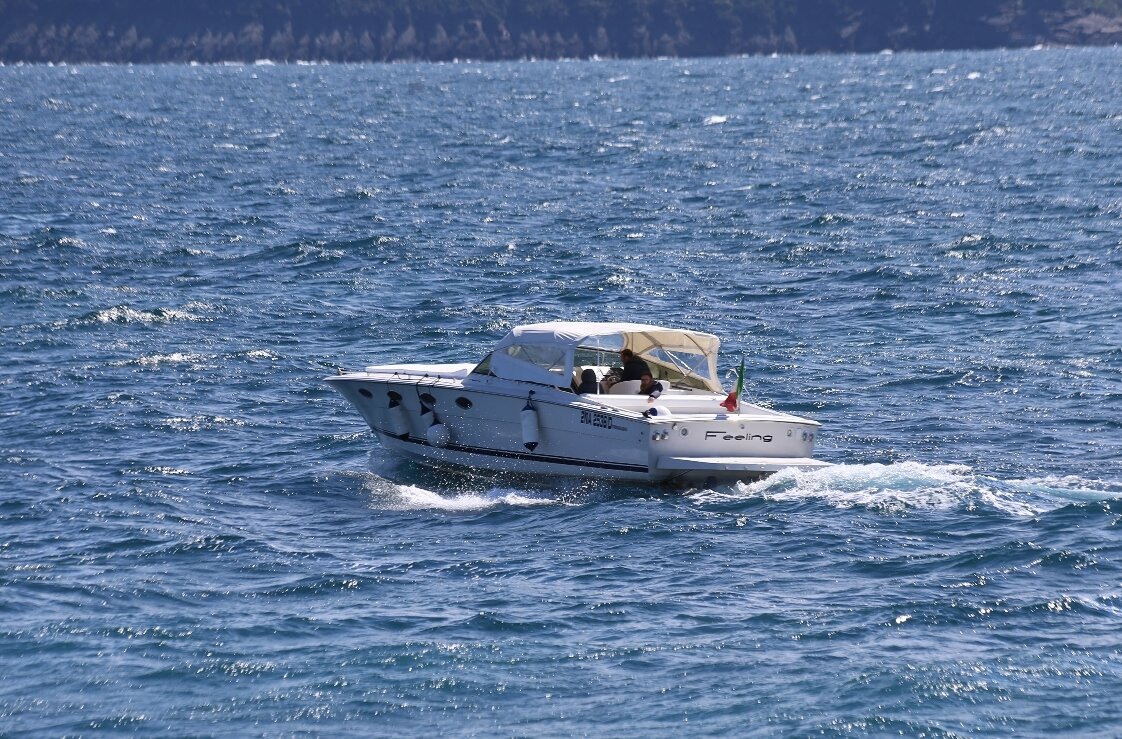 Approaching the end of the route. Ischia island-the largest in the Phlegraean archipelago, and like all the others, is a product of volcanic eruptions. The island stretches for almost 10 kilometers from East to West and 7 from North to South, the length of the coastline is 34 kilometers. The island is formed by a dozen volcanoes, so most of its territory is occupied by mountains. Top point of the island, Monte Epomeo, has a height of 788 meters. 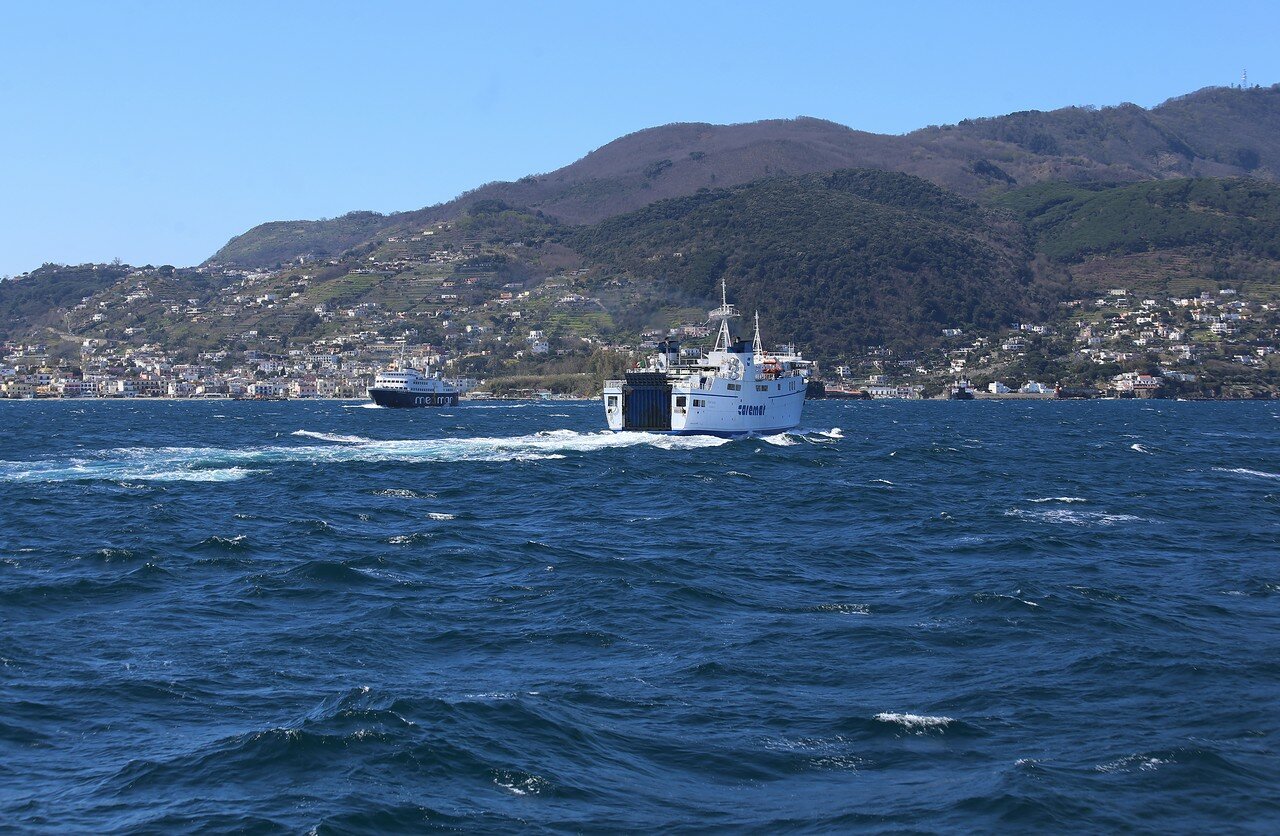 Archaeological excavations prove that the island was inhabited in Neolithic times,and in 790-780 year BC the Greeks founded a colony, which bore the name of Pithecusa. The inhabitants of the colony were mainly engaged in pottery, so it is assumed that the name of the Acropolis is based on the word "Pithos" - pot. In the fourth century BC, the island came under the rule of the Roman Empire and became a major metallurgical center - here melted tin and lead. In Iliad Virgil, the island is named Arime and is associated with the myth of Aeneas. The name, similar to the current (Iscla) is first mentioned in 813, according to one theory it came from the erroneous spelling of the Latin insula. (although this word is often called Roman apartment buildings, but still its original meaning " island"). 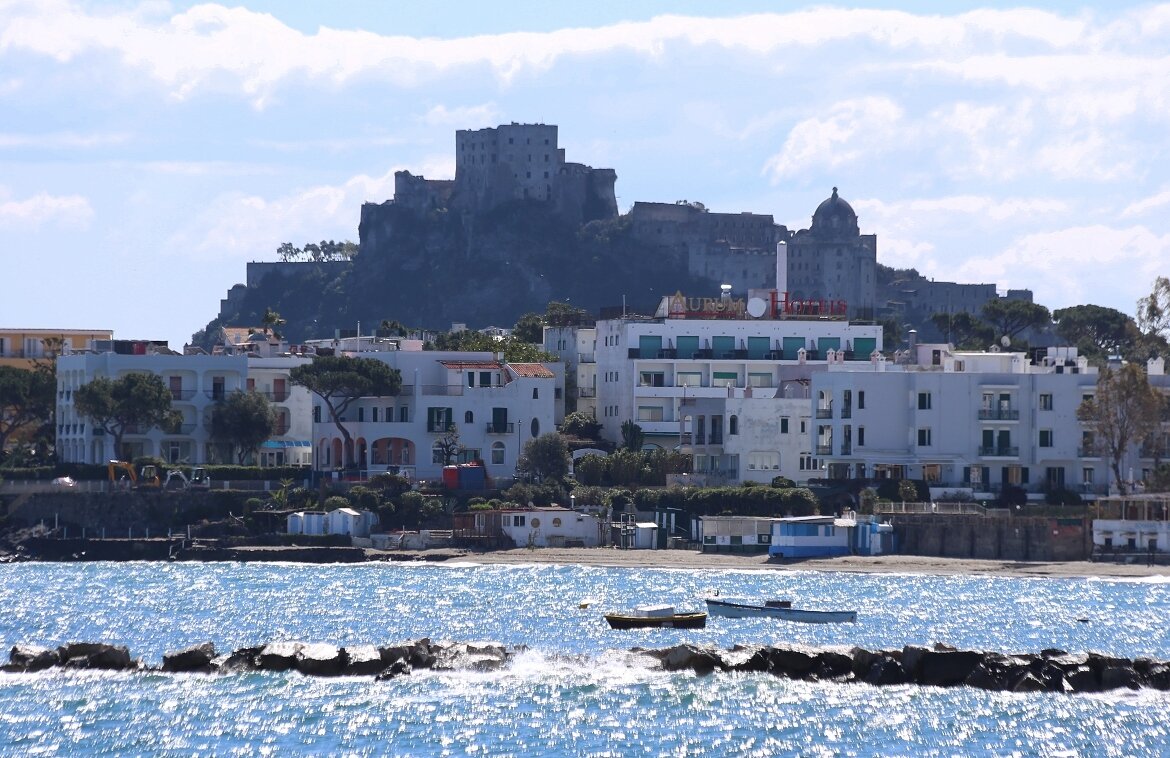 The thermal springs of the island were used for therapeutic purposes by the ancient Greeks, since the 17th century Ischia has become known as a Spa resort for the nobles, and only in the sixties of the twentieth century the island became an object of mass tourism. 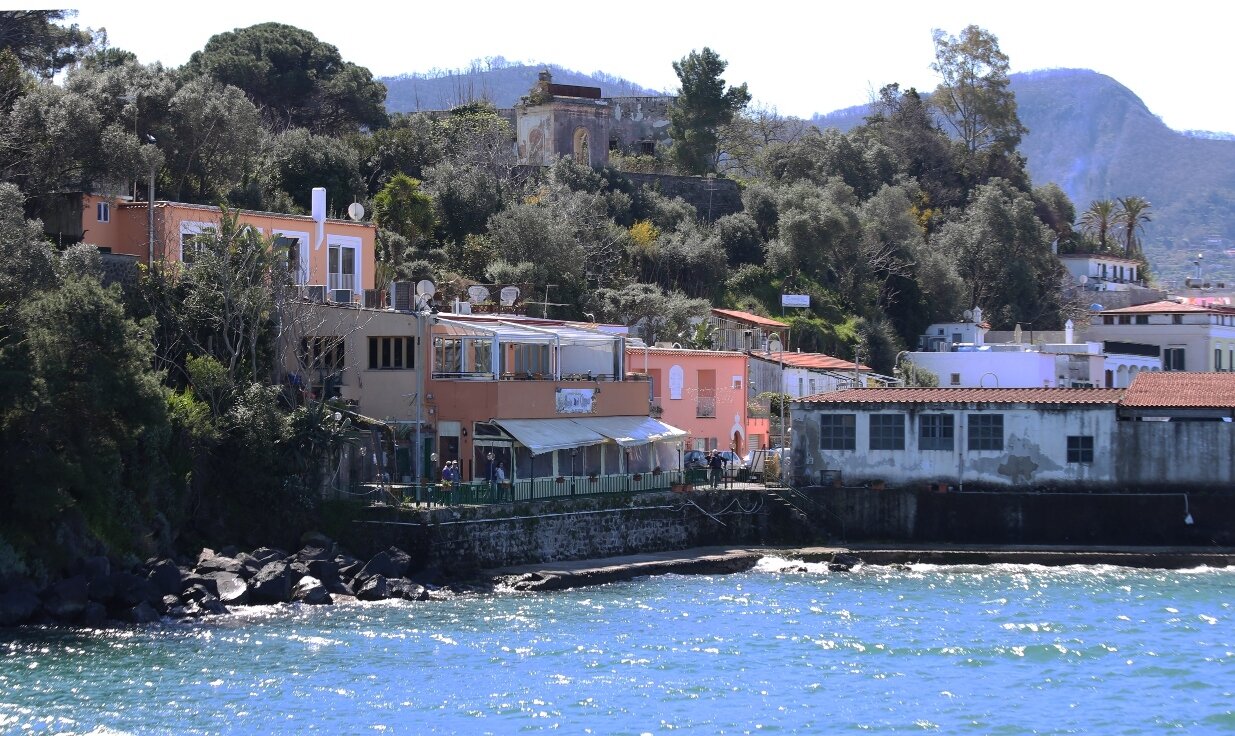 The cheapest and, in my opinion, the most convenient way to get to the Islands are the ferries of Medmar and Caremar, which operate flights from Porta di Massa in Naples. Direct flight, no approach to Procida takes an hour and a half. Ferries run at intervals of 2-3 hours. The schedule can be found here: Caremar, Medmar. Can and faster speed boats to take this route in an hour and go more often, but are almost twice as expensive. 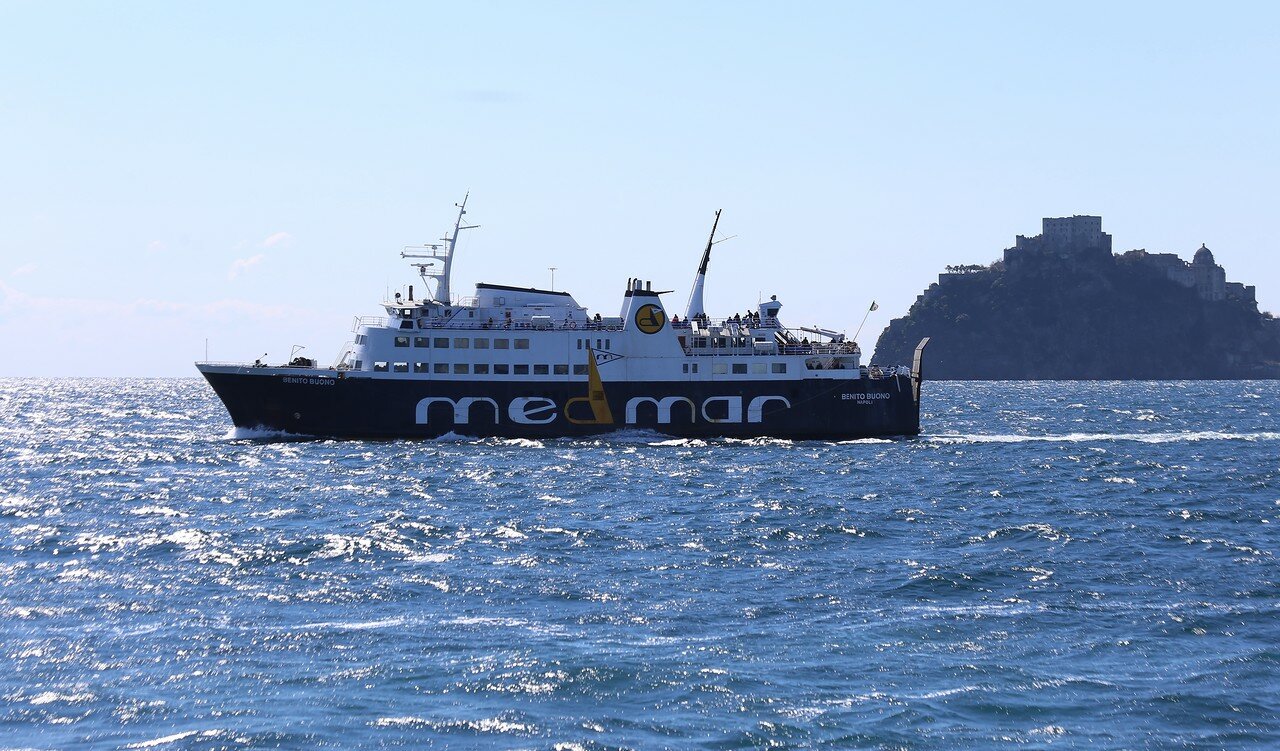 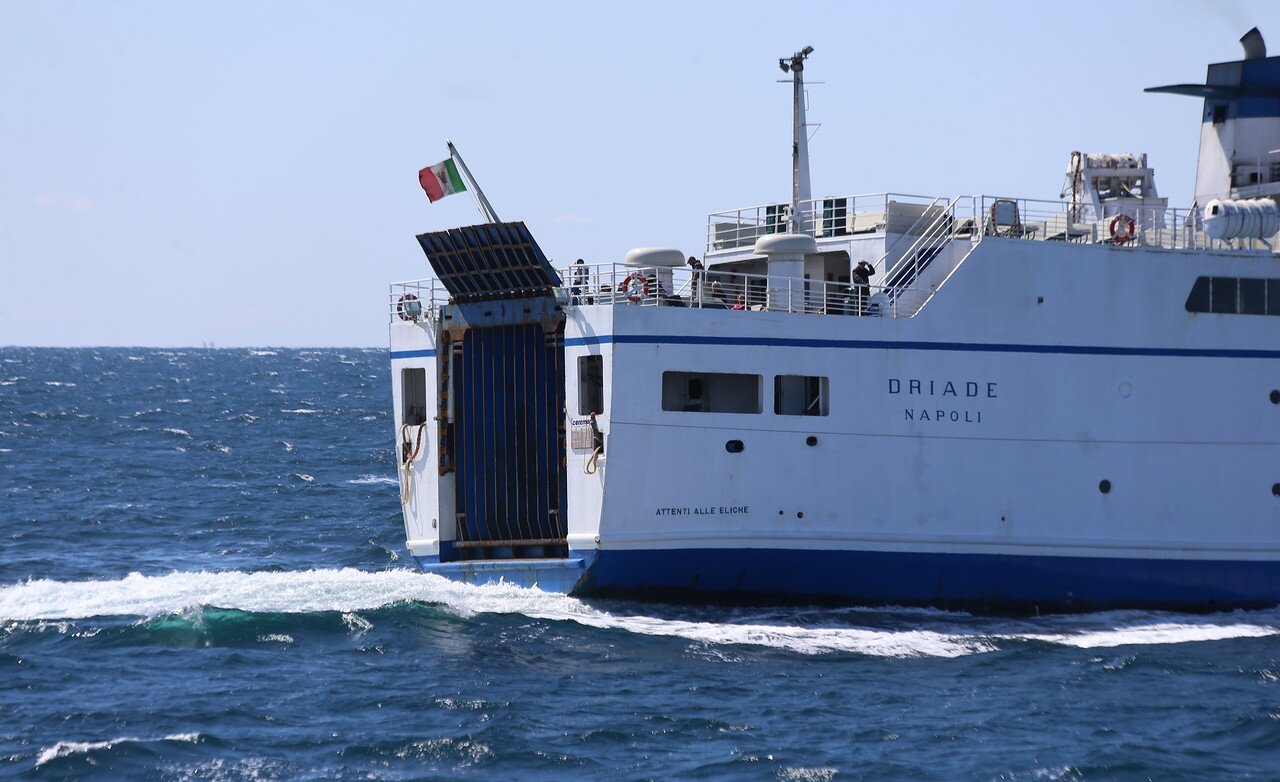 Agata ferry operates on the Ischia Porto-Procida line, it is the shortest waterway to the island. 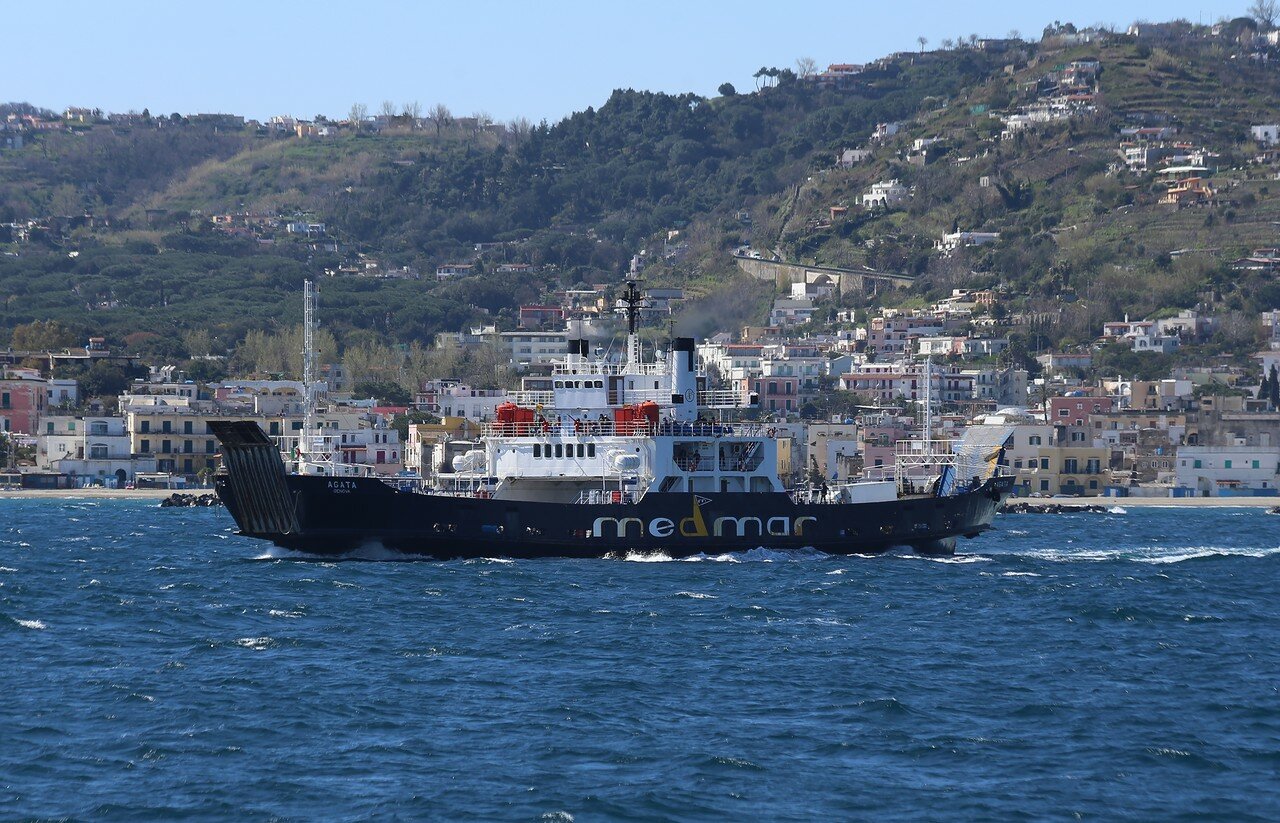 Around the coast of the island there are excursion boats, from the harbors of Ischia there are also routes to Procida and Capri. 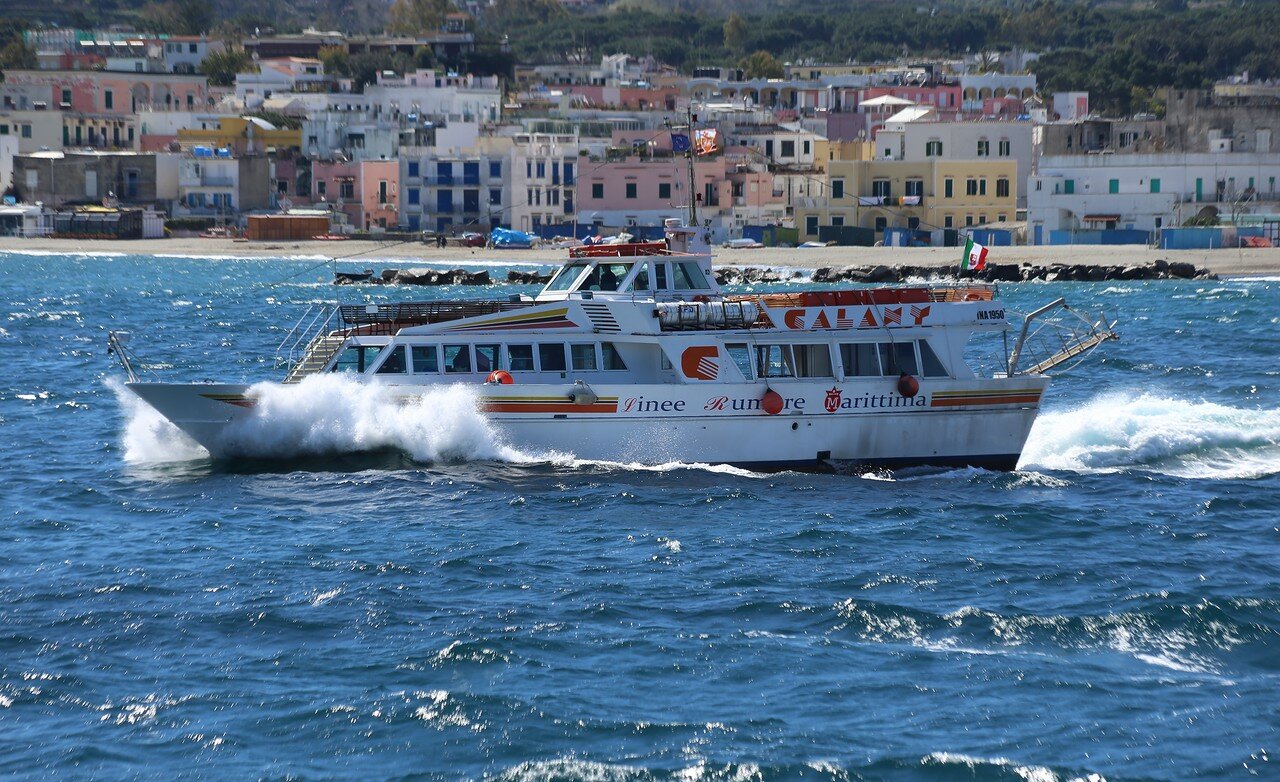 There are flights to the island of Capri, the silhouette of which is blue on the left side. 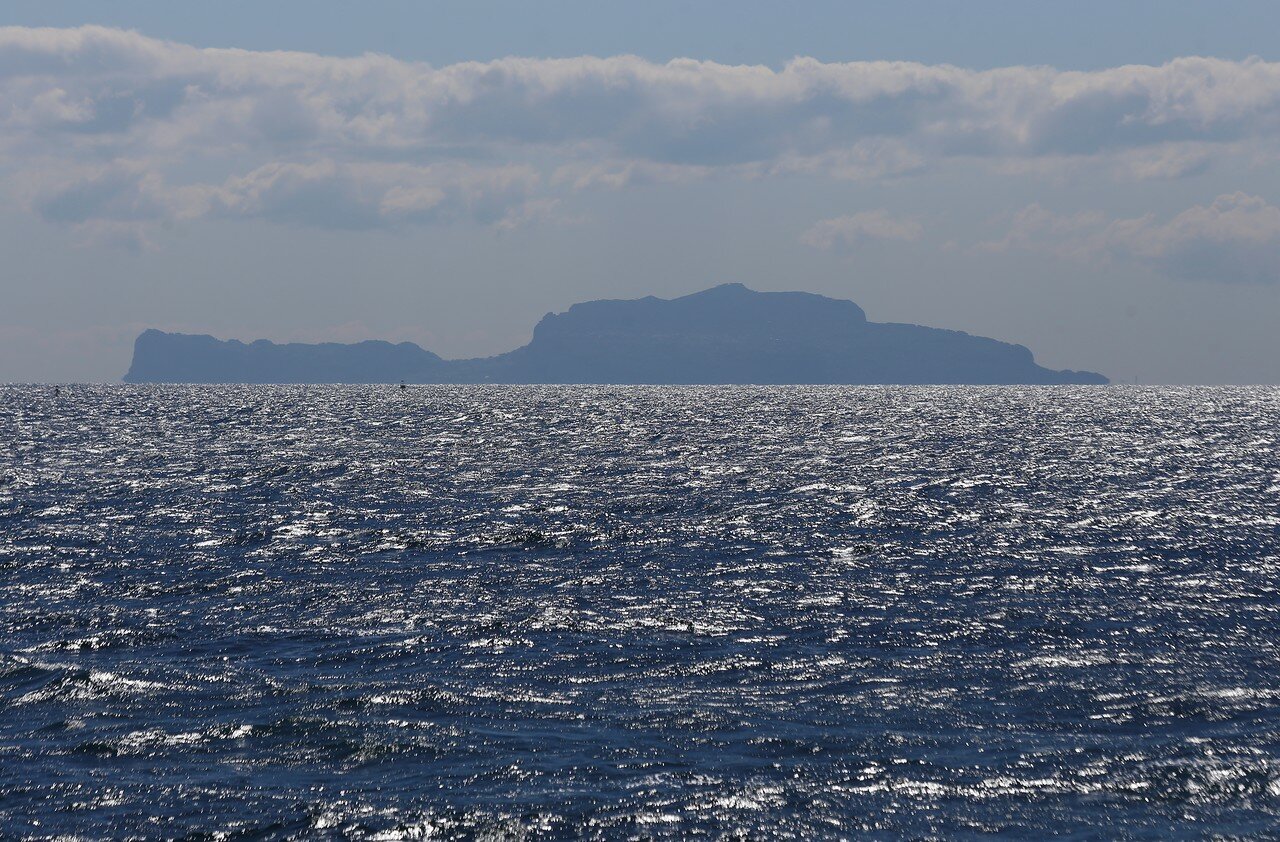 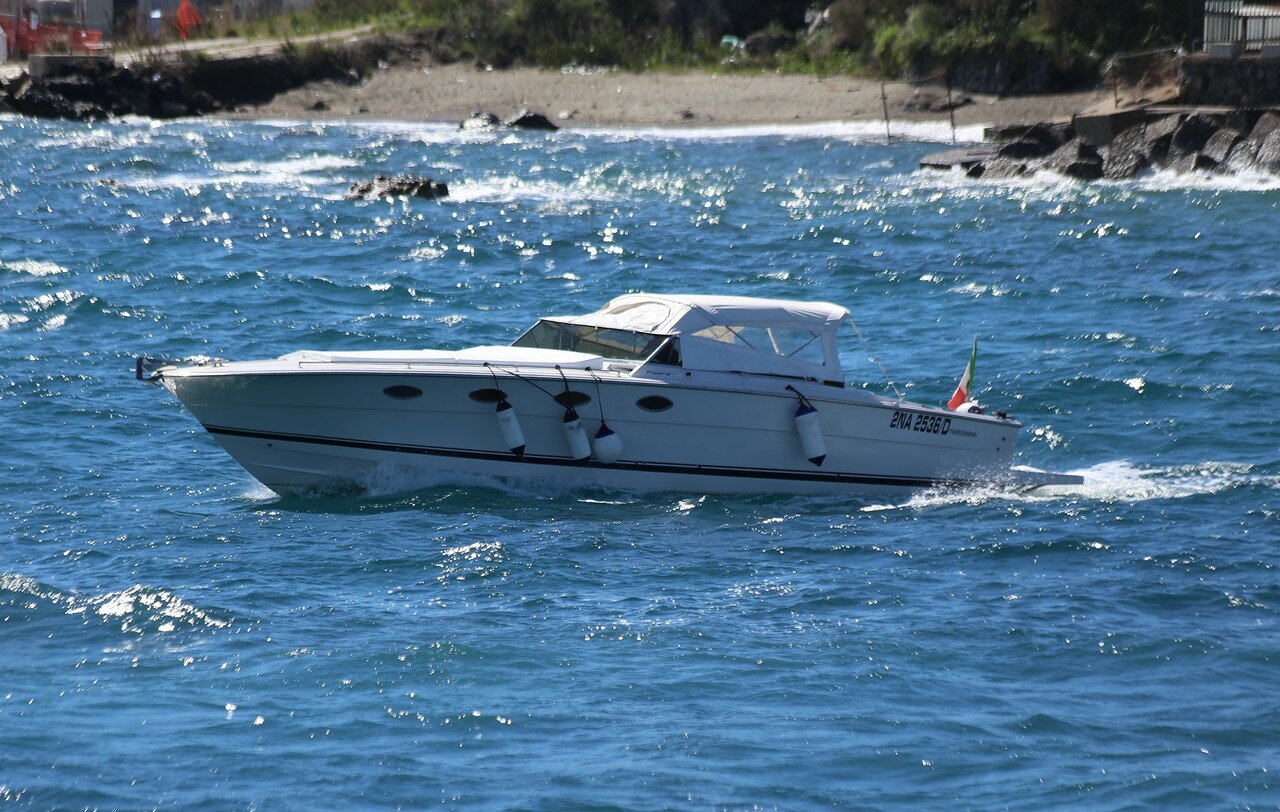 To the right of the entrance to the Harbor, on Cape San Pietro, attracts the attention of a red building with a white dome. In the early twentieth century, the plot on the Cape with the ruins of Pompeii Villa acquired German zoologist Anton Dorn, working in Naples. In 1905-1908, a house designed by Karl Settler was built on the ruins, which became not only a place of rest for the scientist's family, but also a laboratory for the study of the underwater world. In addition to the laboratories, the house provided a dormitory for scientists who came to the island at the invitation of the owner. Now they should at Villa station to study the marine fauna of Naples Institute of Zoology named after Anton Dorn. 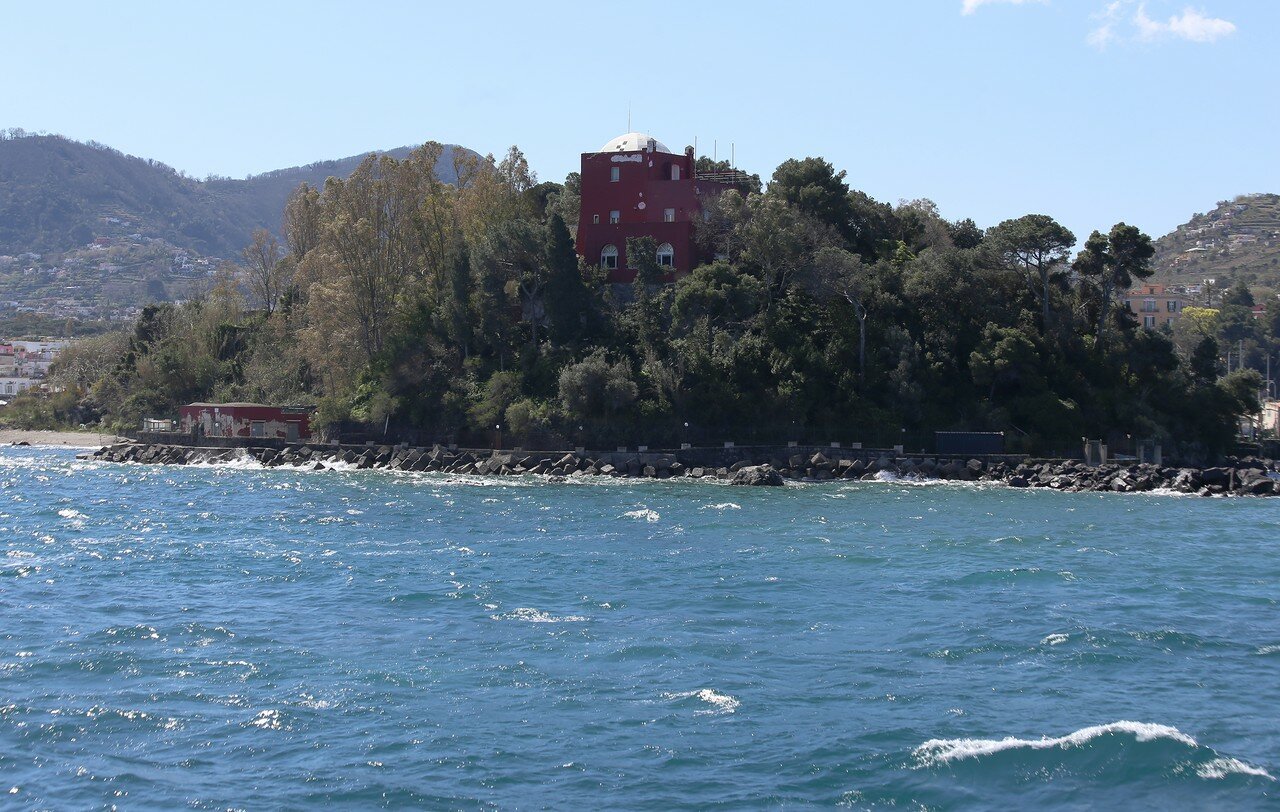 Passing through a narrow channel, we enter the water area of Porto di Ischia harbour-the main transport hub of the island. Ferries and hydrofoils run from Naples and other ports, but much less frequently.

Our ferry approaches the Northern pier, where ferries of shipping companies Medmar and Caremar are moored. 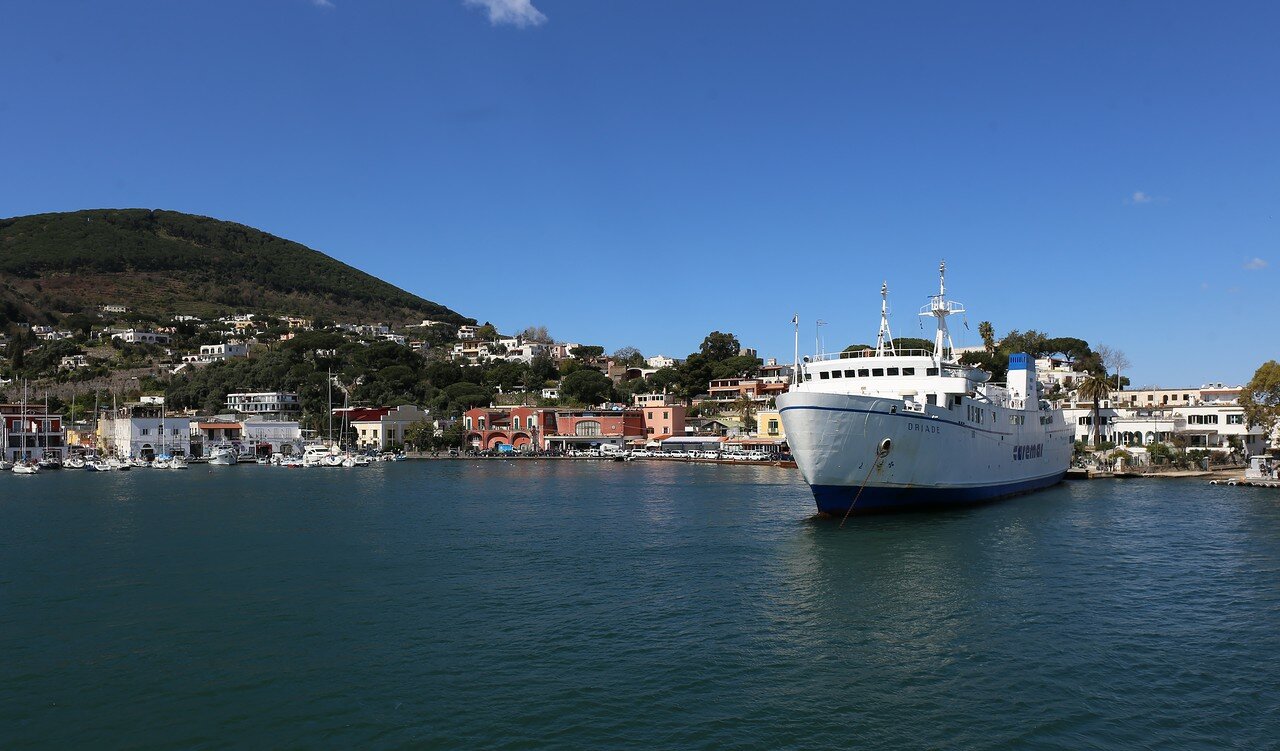