In the Right of the Church of St. Francis, in the corner of the Municipal area catches the eye with its graceful lines another temple (map). In the town records preserved account book for the period 1614-1618 year and the list of priests in 1614, the date of the Foundation of the Church is considered to be 7 Oct 1601. The brotherhood of St. Mary, Visitapoveri, as historians believe, was opened on 7 October 1601, although the earliest archival documents are 1614. 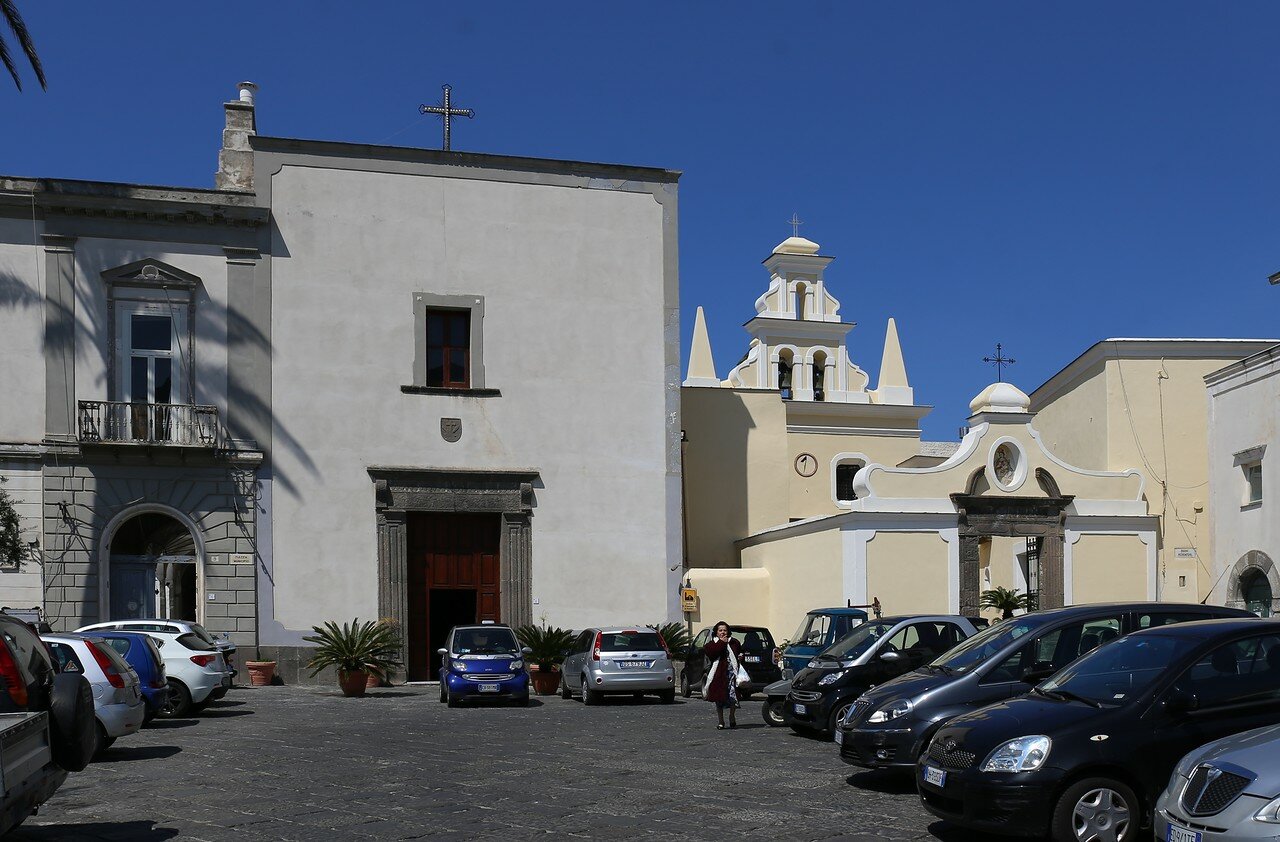 it is also Known that the congregation (fellowship), Vizitatori was formed in the period from 1590 to 1620. The brotherhood arose during the plague epidemic, the main purpose of the congregation were caring for the ill. Vistapoveri - literally "visiting the poor" can be translated as "caring about suffering". 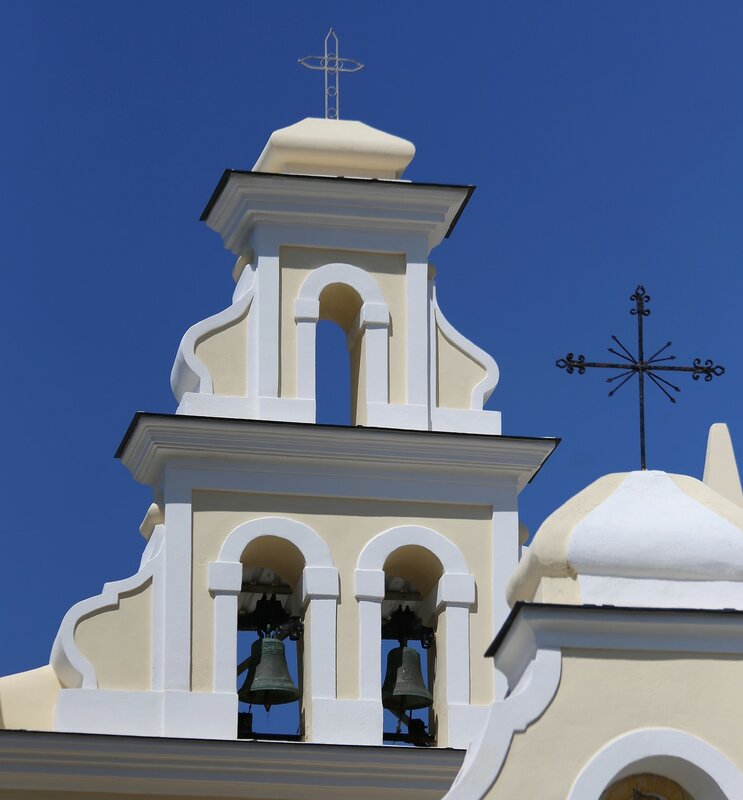 the Temple has a double-facade separated by a courtyard, the first is a gate decorated pediment with a Baroque curves of the lines. Above the gate is a niche with an oval ceramic izobrajeniem of the Madonna and child. 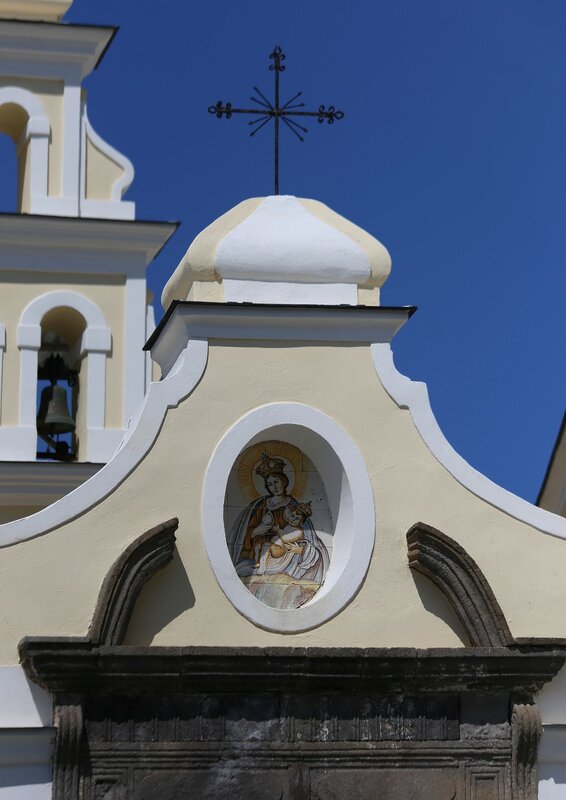 after Passing the gate, on the right wall of the courtyard will see a niche with ceramic panels of the "Heart of Christ". 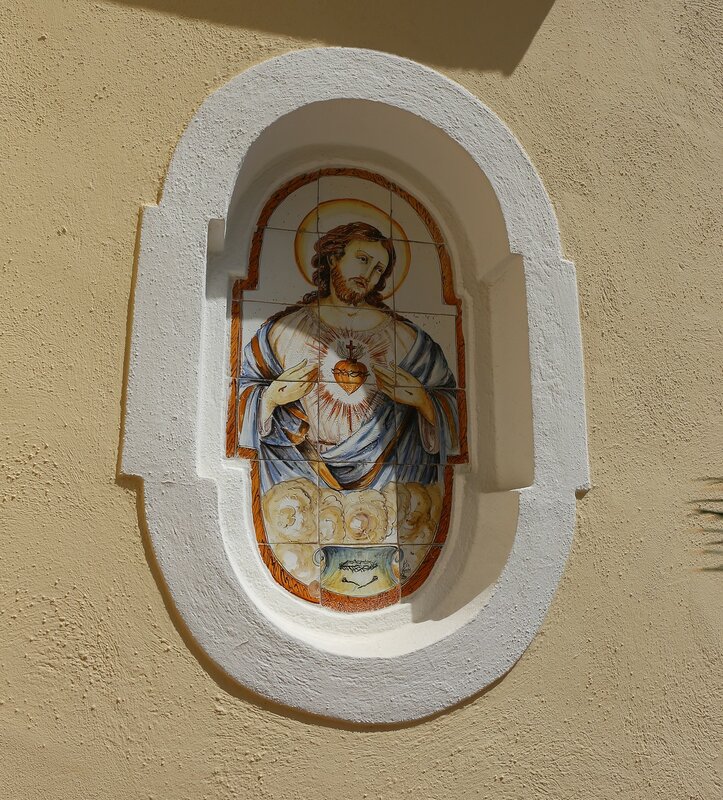 Facade has a rectangular shape with two rectangular Windows. Narrow gable is a belfry, decorated the sides with Baroque swirls, and the corners of the facade are two pyramidal spire that is related more to the Gothic. Similar architectural styles we have seen in the Church San Gaetano. 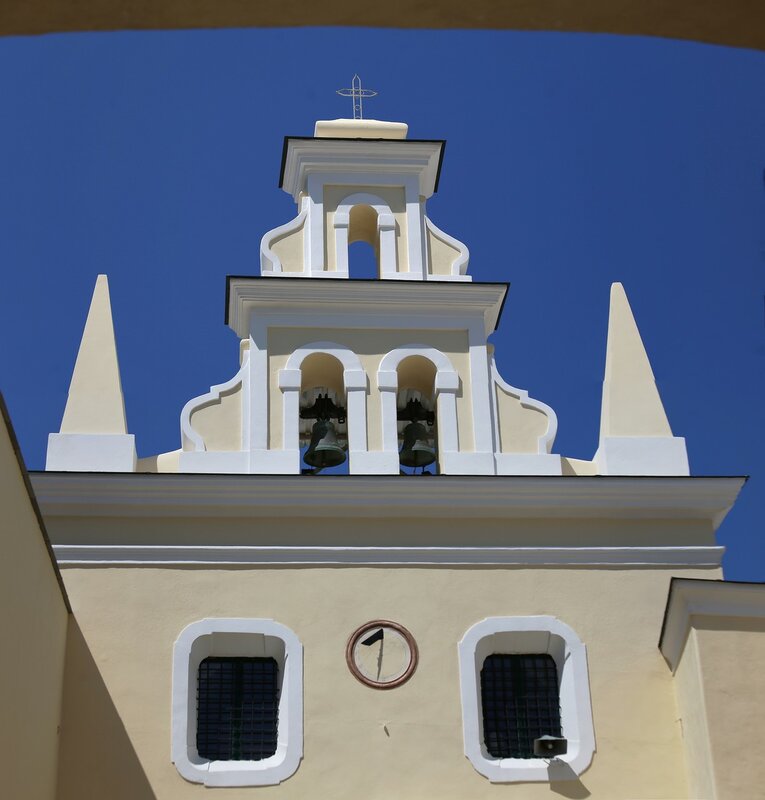 Between the Windows is placed a sundial, which are "behind" on the hour. On my watch it was 12:49, summer. As you can see, the sun time is determined quite accurately. 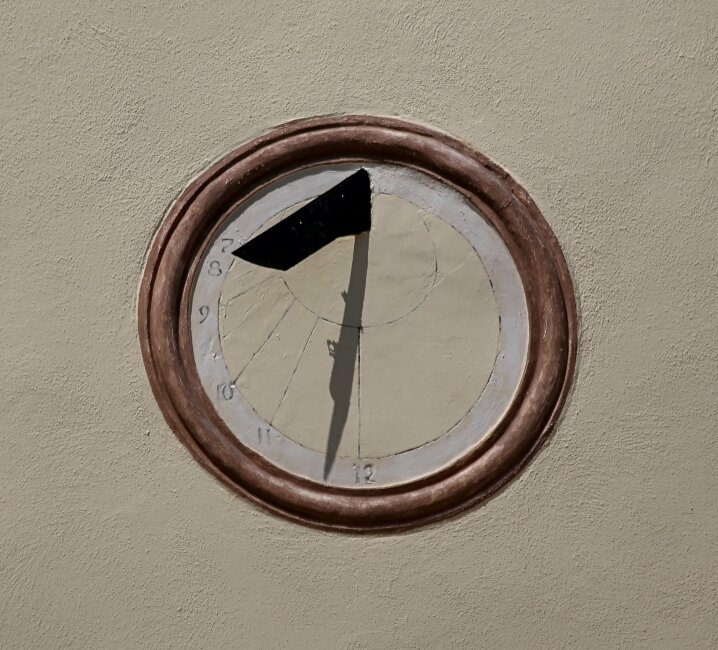 the interior space has a low single nave, covered with an arched ceiling. 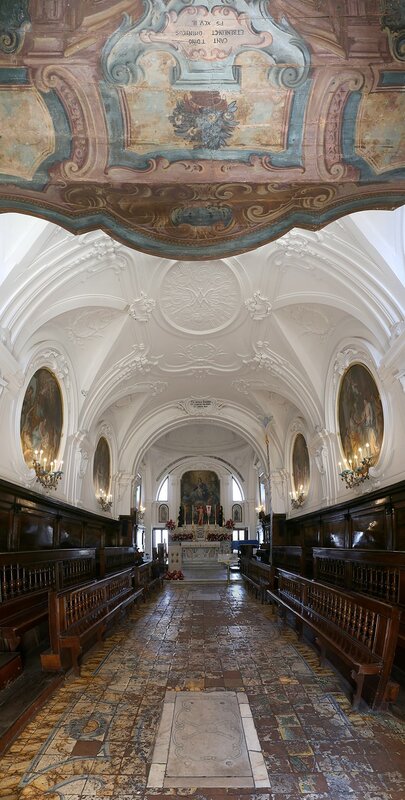 Marble altar was made in 1750, over him, framed by semi-circular Windows, firmly depicting the Madonna delle Grazie and child with saints Joseph and Rocco (Roch). From this painting is the second name of the Church (Chiesa della Madonna delle Grazia). 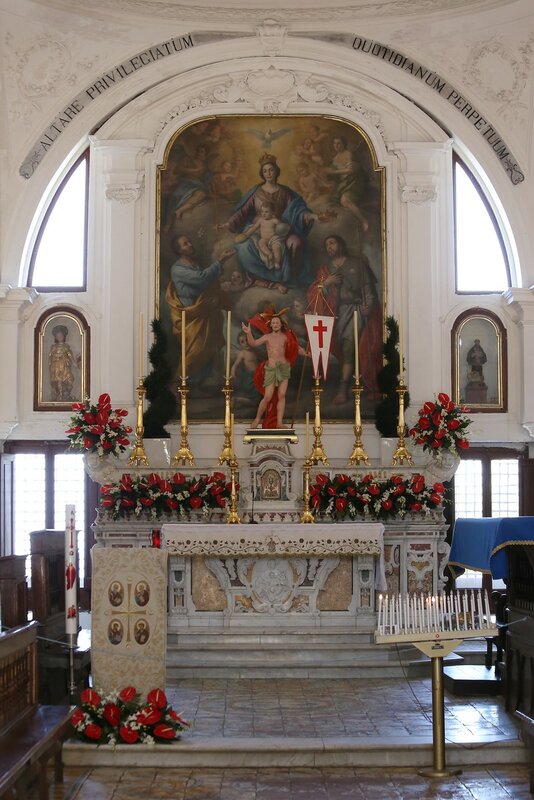 Ceramic tile covering the floor of the temple, made in the workshop of the family Chiaiese known Neapolitan masters of the 18th century. Mural depicts flowers and birds, often found vine and lemon - symbols of agriculture in the Mediterranean. 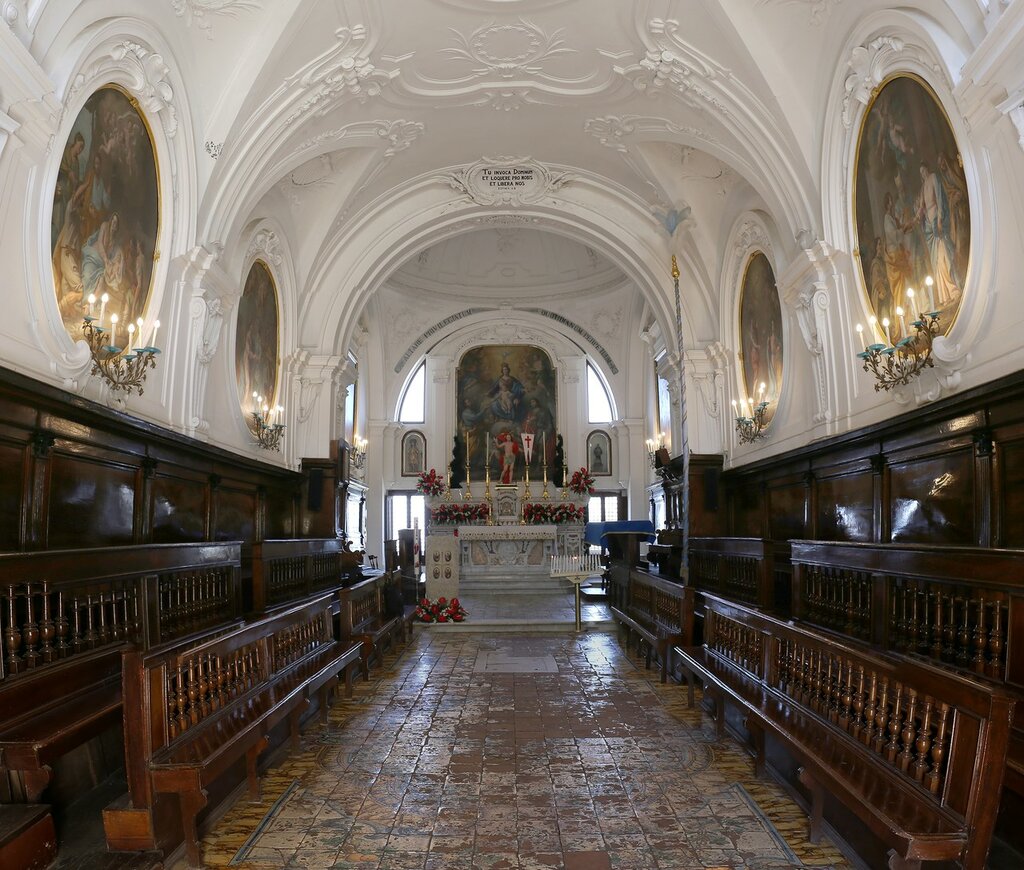 sorry, the tiles do not stand the test of time in good standing only a few elements. 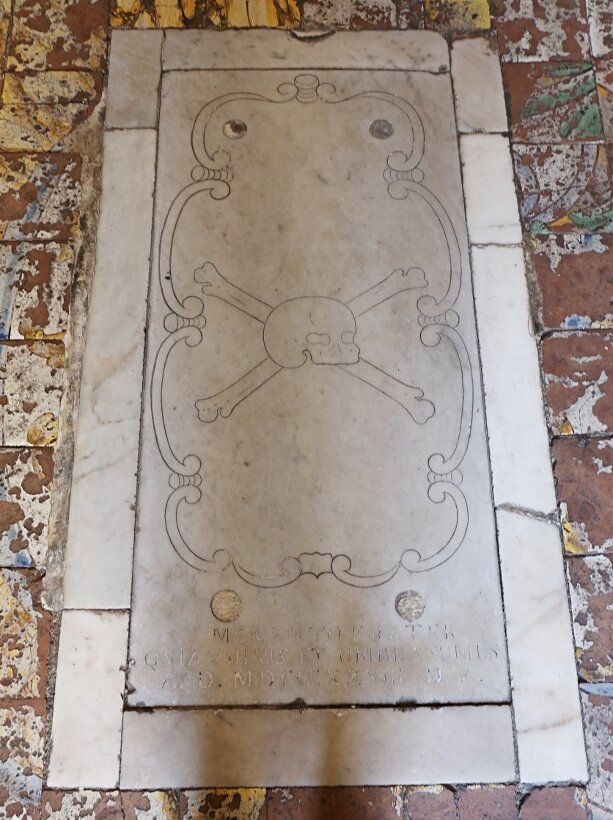 Walls and ceiling are decorated with stucco, made in 1781 Francesco Starace and his brother Cesare. The work of the brothers Starace can be seen in many churches of the island. 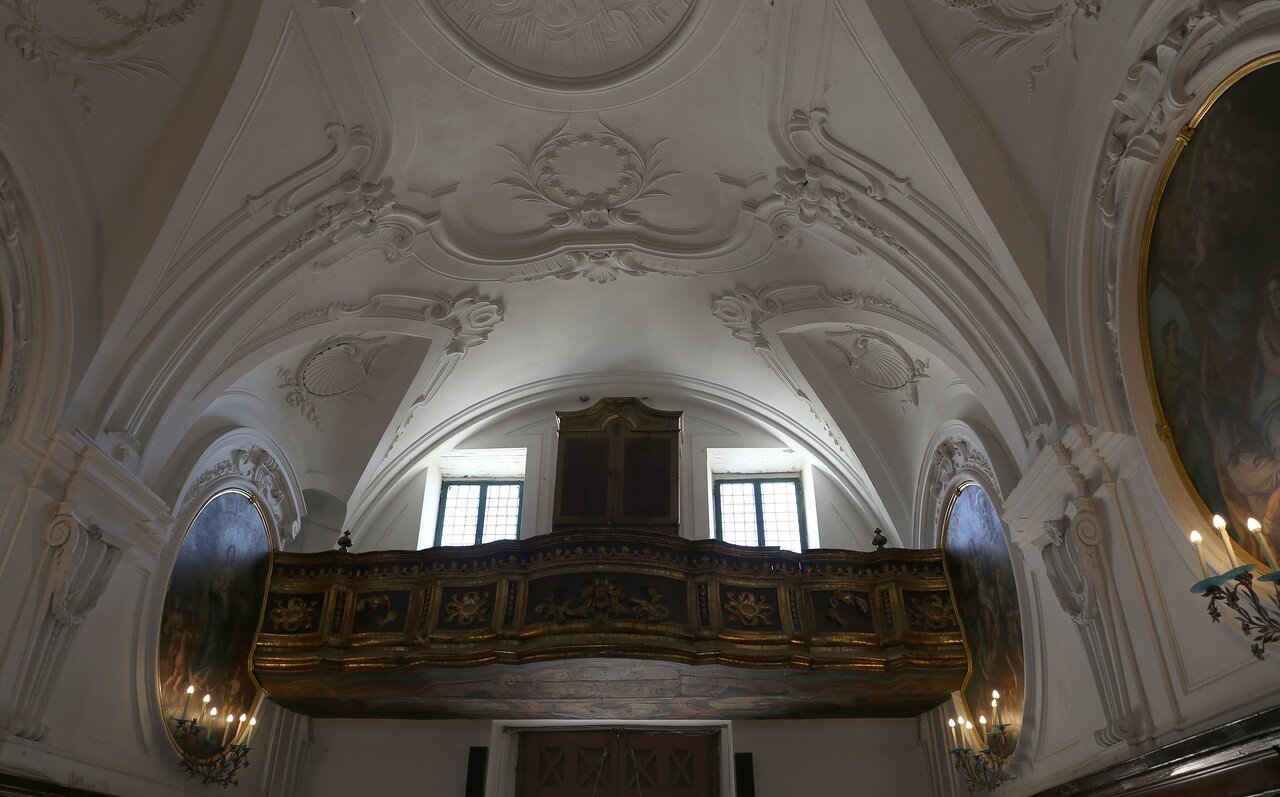 center of the ceiling is the monogram of St. Mary, stucco floral motifs. 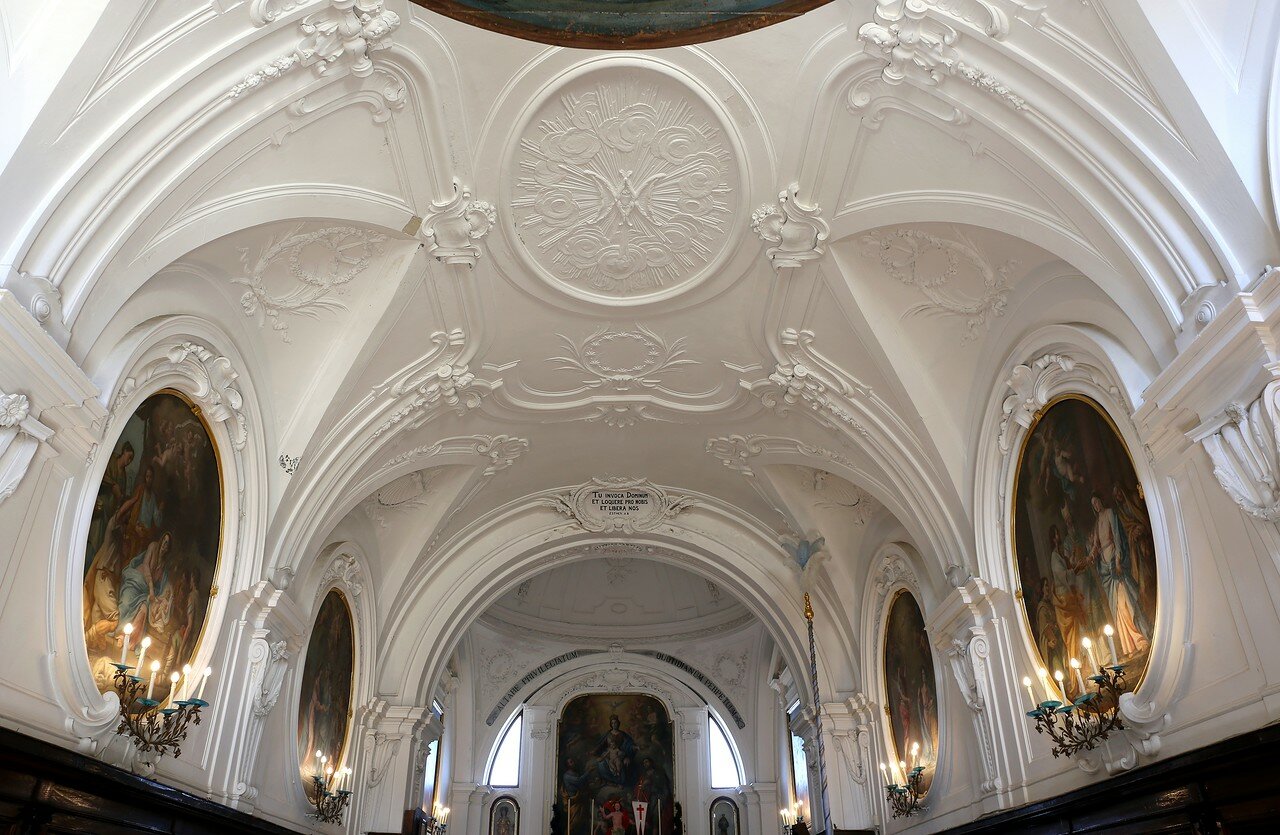 Organ balcony above the entrance decorated with gilded carvings. 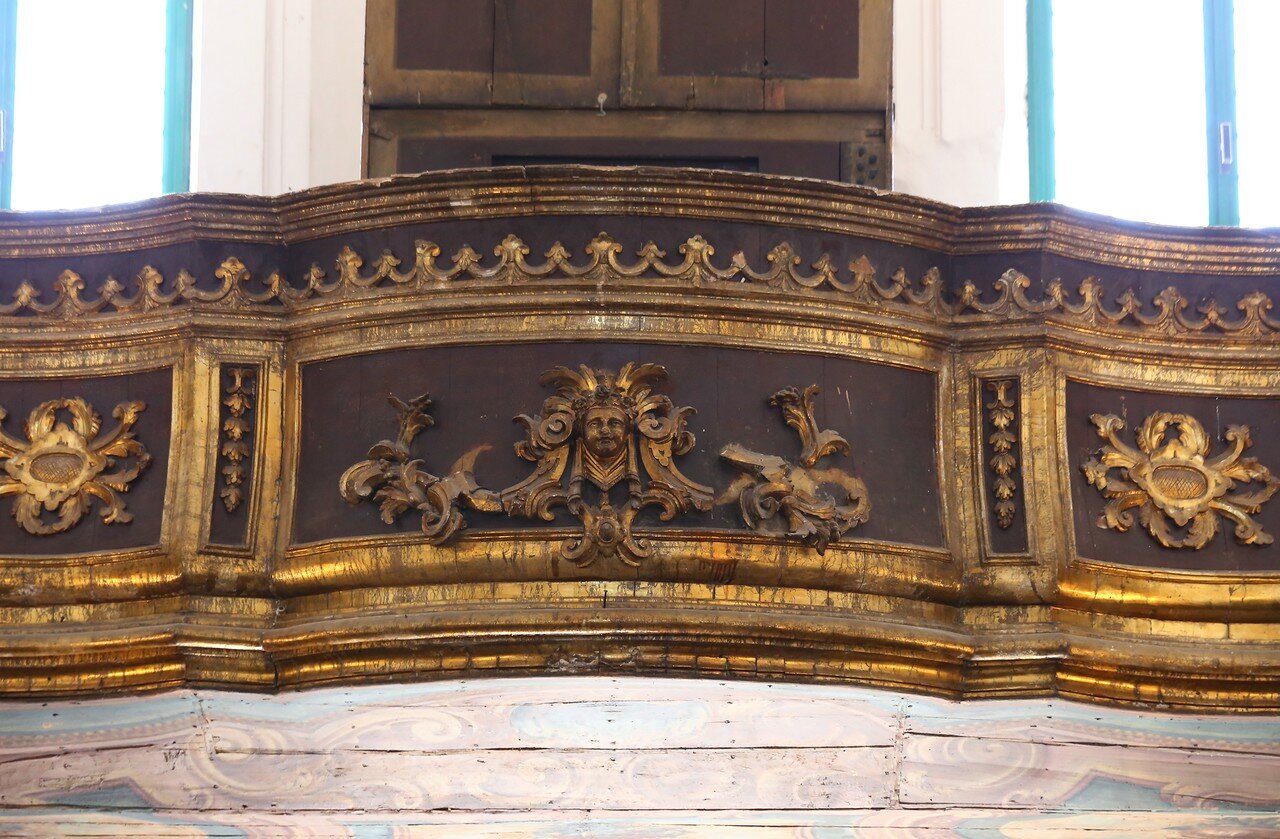 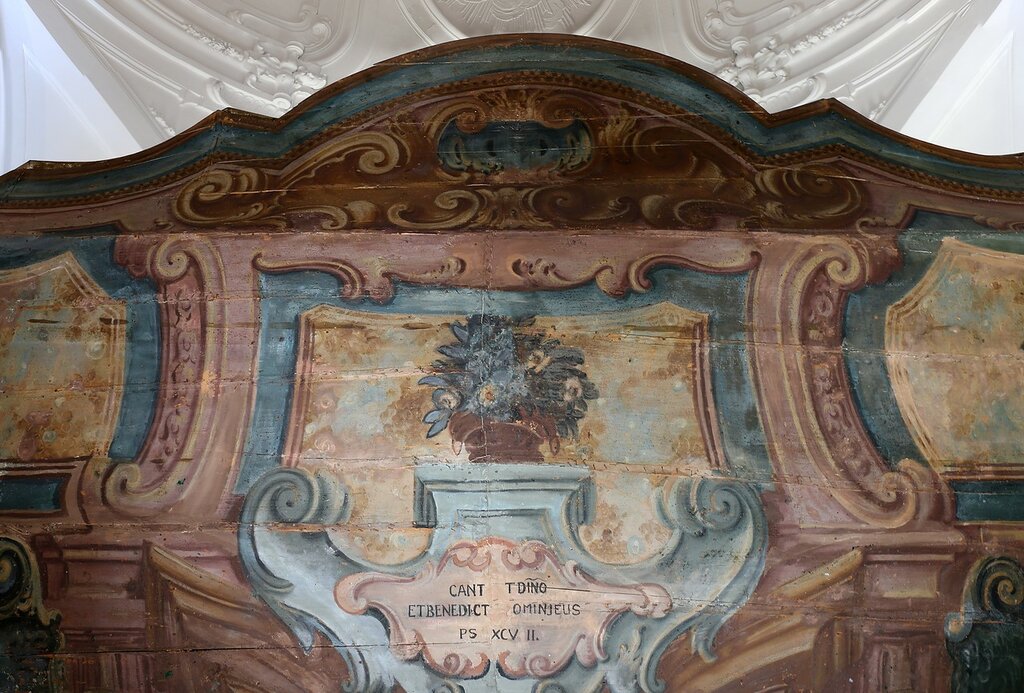 the Walls are decorated with round paintings of Alfonso di Spigna and other masters, dated 1775-1780 year. 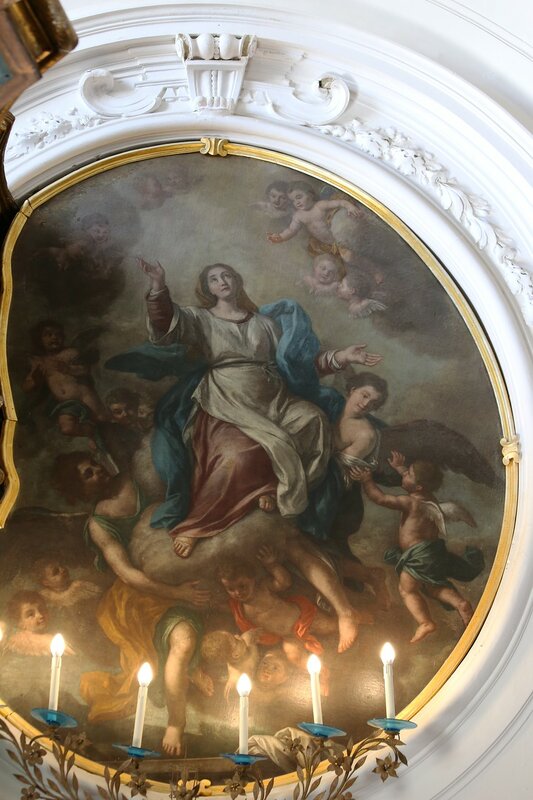 Paintings depict the Immaculate Conception, the Annunciation, the Nativity, the Dormition and other biblical themes. 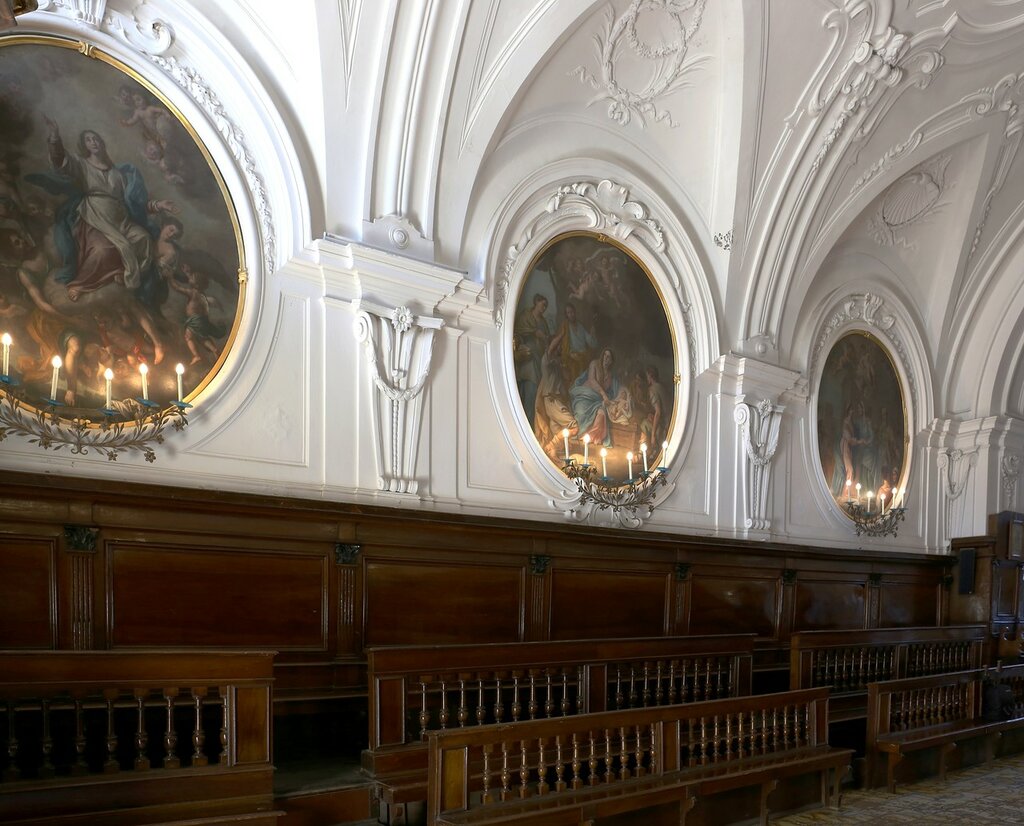 the Right of the entrance you can look in the sacristy. 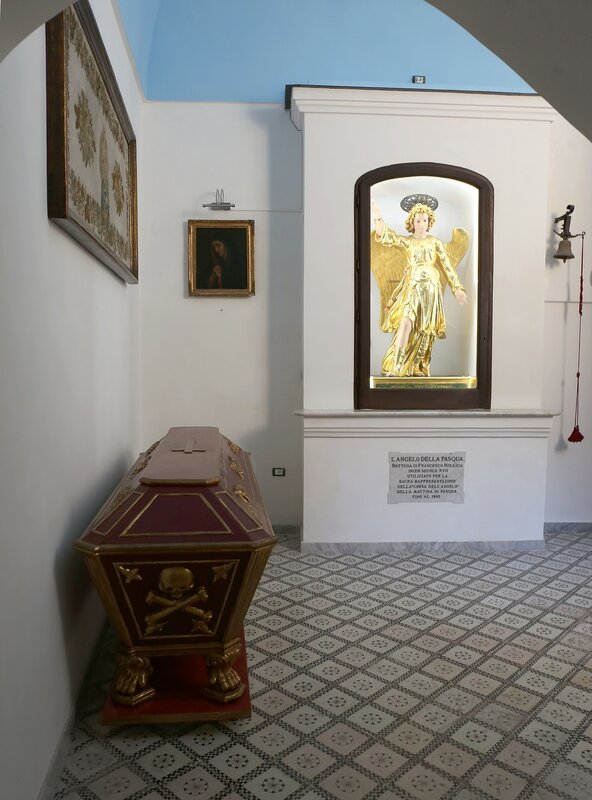 Here we see a gilded wooden statue of an angel, made between 1600 and 1624 year by an unknown Carver. Every year on Easter the statue of the bear at the head of the procession through the streets of the town. 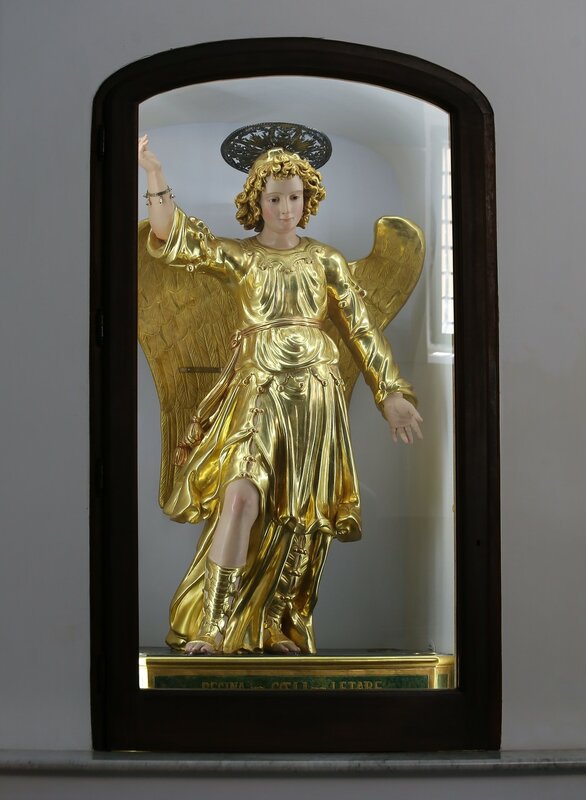 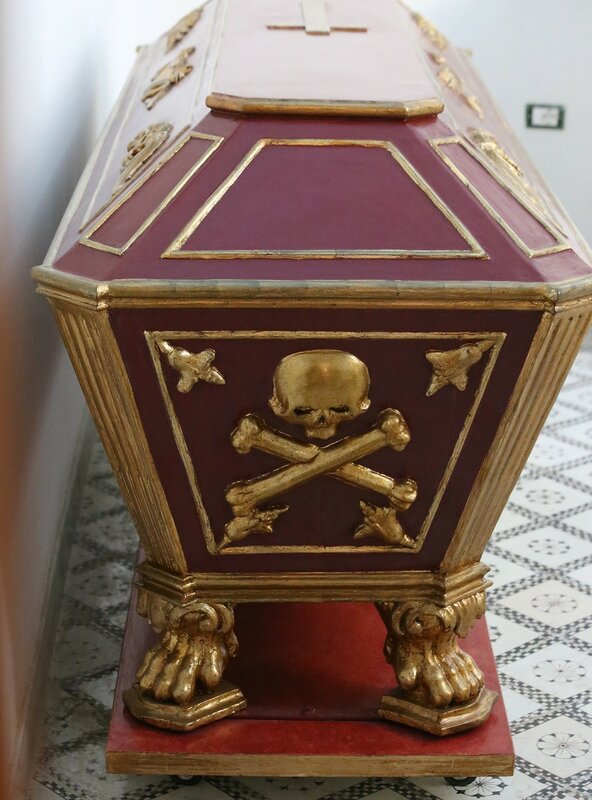